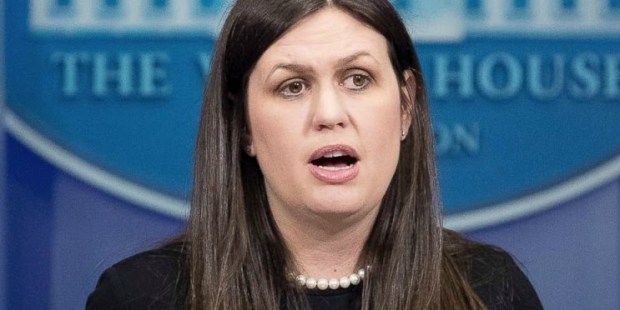 For many conservative Christians, defending their faith is now tied tightly to defending Trump. For Sanders, that meant becoming a headline herself the day before this interview after she told reporters during a briefing that an ESPN host who called Trump a “white supremacist” should be fired. The comment about Jemele Hill set off an immediate firestorm.

To prepare for that briefing, Sanders that day had opened her leather-bound daily devotional, as she always does before heading out to the podium. The one she uses is the best-selling “Jesus Calling: Enjoying Peace in His Presence.”

In her office, she read this to herself: “Come to me and rest. Give your mind a rest from its habitual judging.”

…Sanders doesn’t talk about God publicly often — not nearly as much as Trump does these days. People who worked with her on campaigns say she’d say a pre-event prayer but otherwise was focused on things such as voter strategy. Her faith life mirrors younger evangelicals with their move away from denominations.

Although she identifies as a Southern Baptist — the biggest, and among the most conservative U.S. affiliations — the past few churches she has attended are more mainstream evangelical. Her husband is not only a Catholic, but their three children were baptized as infants, a rite mandatory for Catholics and some other Christians but long considered a deviation to traditional Southern Baptists, who believe baptism should be reserved for people who have decided on their own to accept Christ.

A family friend describes Sanders and her husband, Bryan Sanders, as “progressive Christians.” In a compromise, they go to evangelical and Catholic churches every Sunday.