Serving the East: answering the call to be deacons in India 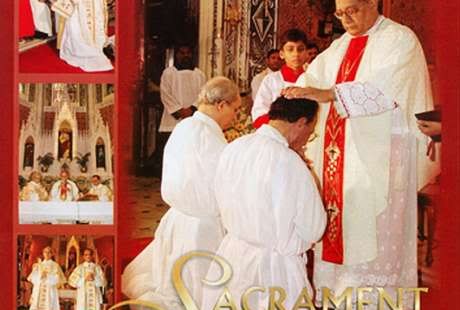 Share
Print
Deacon Greg Kandra - published on 05/08/17
A little news from the other side of the world:

Last month, the Catholic Church in Mumbai appointed two married men — one of them a former business executive, the other a former journalist — as deacons.

A deacon ranks lower than a priest and can perform most of the religious work that a priest does, but he cannot conduct mass, hear confessions and administer the sacrament called anointing the sick. They can preach, baptize, bless marriages and visit the sick and the aged –– providing relief to regular priests whose work days can get crowded, especially Sundays.

The practice of appointing deacons is not new. In Mumbai, the first deacons were appointed in January 2006 when two men, including a 74-year-old , were appointed to the post. “Though it was first proposed by the Catholic Bishops Conference of India (the highest decision making body of the church)in 1966, the archdiocese of Bombay was the first to take the lead in appointing deacons,” said Father Gilbert Lima from St Peter’s College, a seminary in Goregaon.

Bishop Bosco Penha, now retired, who promoted the idea and was in charge of the programme when it started in Mumbai, said that there are now 16 deacons in Mumbai. “As far as I know, it has progressed well. It is a difficult thing – married men have to train for four years, but we are getting candidates. There are four to five people who are preparing for the work,” said Penha.

Church members feel that deacons are a necessity because of the shortage of priests. Melwyn Fernandes, a Thane resident, said that they have one deacon who visits five or six churches in the area, providing religious services. “Families are becoming smaller and there are fewer people who will be interested in priesthood,” said Fernandes.

But Lima said that the appointment of deacons, at least in Mumbai, is not related to the decline in the number of men taking up priesthood. “There are enough vocations (ordainment of priests) in Mumbai,” said Lima. “The reason why there is an increase in the number of deacons is because the church realizes that some men may want to serve as permanent deacons.”

Lima says that the church is not complete without deacons. “Bishops, priests and deacons are part of the hierarchy,” said Lima.

Read it all. Meantime, a little Googling turned up this piece of history, a blog item from 2006 on the very first permanent deacons of India:

It was a historic landmark event in the checquered history of the Roman Catholic Church in India on Sunday at the Holy Name Cathedral in Mumbai when Cardinal Ivan Dias, Archbishop of Bombay, ordained first ever two married men in India as permanent deacons during the solemn Mass in the presence of bishops, the deans, the priests, religious and the faithful congregated for this solemn ceremony.

The sacrament of Holy Orders comprises Bishops, priests and deacons. The candidates ordained on Sunday, Jan. 22 were received into the ministry of the diaconate as a permanent institution. As elucidated by Cardinal Dias, the diaconate is for service (Diakonia, which is derived from Greek, means servant of God). The deacon is commissioned and sent forth to preach the Good News, to teach what he believes, believe what he preaches and practice what he preaches. The three most important aspects associated with the office of the deacon is the breaking of the Word of God, to serve at the Altar and carry out the good works of charity as an official and ordinary minister of the Church in the person and name of Christ. The diaconate of the sacrament of Holy Orders is open for married as well as bachelors.

At the ceremony, Bishop Bosco Penha, in-charge of the laity, presented the two candidates to the ordaining prelate Archbishop Ivan Cardinal Dias, who after examining them proceeded with the ceremony of ordination, consisting primarily of laying of hands upon the ordinandi, invoking the Holy Spirit upon them and the solemn promising of obedience to the Ordinary of the diocese by the candidates and the pledging of loyalty to the Church by the placing their hands over the Bible.

Soon after their induction as permanent deacons, Mr Lloyd Dias from Sacred Heart Church, Vashi and Mr Elwyn De Souza from St Joseph Church, Juhu assisted the main celebrant Cardinal Dias in the Holy Eucharist along with the other concelebrants Cardinal Simon Pimenta, Auxiliary Bishops Bosco Penha, Percival Fernandez, Agnelo Gracias and Bishop Emeritus Ferdinand Fonseca and several priests from the archdiocese. In the congregation were present, the wives of the deacons, their children, relatives and friends, who participated in the Eucharist and witnessed the extraordinary historic moment.

The institution of the permanent diaconate is a move to give greater participation to the laity in the life and ministry of the Catholic Church, and would go down as a red-letter day in the life of the Bombay Archdiocese for restoring the diaconate to the permanent rank of the Church hierarchy. At the ceremony Cardinal Dias placed the sacrament of the Holy Orders in its true perspective, pointing out a three-fold division. First the Bishop, who acts in the name and person of Christ, is the Shepherd and the Spouse of the Church. This is symbolized by the mitre and the crozier indicating his role as Shepherd, the ring symbolizing him as the Spouse of the Church and his chair, indicating his teaching authority in the Church. The priest acts in the name and person of Christ as sanctifier, symbolized by the paten and the chalice which he uses to offer sacrifice for the forgiveness of sins, thus enabling him to offer sacrifice of the Mass and forgive sins. The deacon, who acts in the name and person of Christ, is ordained to the ministry of service, symbolized specifically by the stole (towel). He therefore is the ordinary minister at the Altar and dispenser of the other works if charity and breaking the Word of God. He ranks next to bishops and priests in the hierarchy of the Catholic Church.

Well, there are a few things they don’t quite get right in the report—among other things, suggesting that deacons are laity, and that the restoration of the diaconate was brought about “to give greater participation to the laity.” But read on for more on the men who were ordained 11 years ago. They are true pioneers. God bless them.