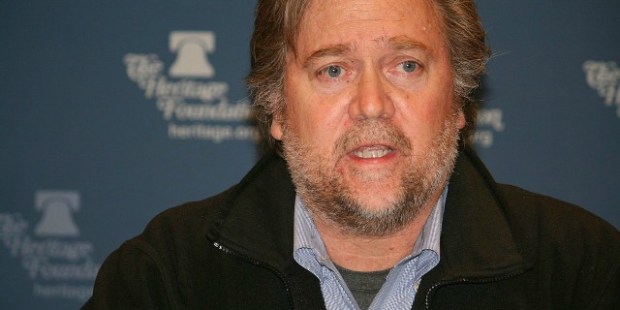 When Stephen K. Bannon was still heading Breitbart News, he went to the Vatican to cover the canonization of John Paul II and make some friends. High on his list of people to meet was an archconservative American cardinal, Raymond Burke, who had openly clashed with Pope Francis.

In one of the cardinal’s antechambers, amid religious statues and book-lined walls, Cardinal Burke and Mr. Bannon — who is now President Trump’s anti-establishment eminence — bonded over their shared worldview. They saw Islam as threatening to overrun a prostrate West weakened by the erosion of traditional Christian values, and viewed themselves as unjustly ostracized by out-of-touch political elites.

“When you recognize someone who has sacrificed in order to remain true to his principles and who is fighting the same kind of battles in the cultural arena, in a different section of the battlefield, I’m not surprised there is a meeting of hearts,” said Benjamin Harnwell, a confidant of Cardinal Burke who arranged the 2014 meeting.

While Mr. Trump, a twice-divorced president who has boasted of groping women, may seem an unlikely ally of traditionalists in the Vatican, many of them regard his election and the ascendance of Mr. Bannon as potentially game-changing breakthroughs.

Just as Mr. Bannon has connected with far-right parties threatening to topple governments throughout Western Europe, he has also made common cause with elements in the Roman Catholic Church who oppose the direction Francis is taking them. Many share Mr. Bannon’s suspicion of Pope Francis as a dangerously misguided, and probably socialist, pontiff.