I’m hardly what you’d call a fashion plate. But there’s one item of clothing I own that consistently turns heads, sparks a reaction and earns comments and compliments. 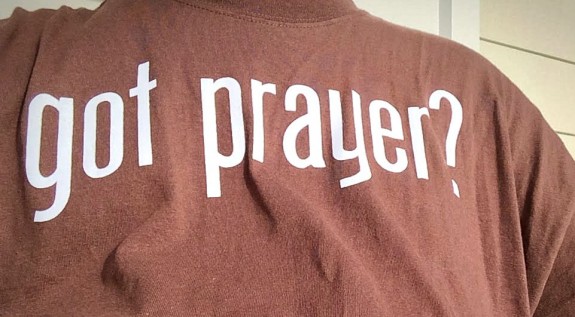 I got this t-shirt last year at the Catholic Media Conference in Charlotte, N.C. They were giving them away at a booth set up by a group of Poor Clares who are raising money to build a monastery in North Carolina.

I wore this shirt today around Walt Disney World. A father on a bus said, “Hey, I like your shirt.” An older woman in line at a restaurant said, “Nice shirt!” The cashier at the bakery at our resort smiled and said, “I really like that t-shirt.” A stranger passing me in the hall of our hotel said, cheerfully, “Great shirt!” This happened about a half a dozen times today—which is roughly six times more response than I get for anything else that I wear.

Occasionally, people ask me where I got it. I usually point them to the back, where it announces:

“Help us build his Eucharistic throne. Ask me how.

This is hardly a scientific survey, and it may mean nothing more than people are happy to see something in Orlando that doesn’t have on it the image of a mouse, a duck or a dog.  But I think in our increasingly secularized age, folks may be relieved to see some public sign of religious belief. The shirt, in its odd little way, bears witness. It poses a rhetorical question that may be very much on peoples’ minds right now. It provokes, challenges, nudges. It reminds us of something that is too often forgotten—or dismissed. And it places in your face an idea that is many would prefer to keep in the margins or, maybe, behind closed doors.

Unfortunately, I don’t think the Poor Clares are selling these shirts online, but if you want to send a message like this to the world, visit Cafe Press. This page has several similar shirts for sale (including one that says “got Mass?”)

And to learn more about the Poor Clares monastery, and support their work, check out the video below and visit their home page.