The Assumption and the “Wedding of the Sea” 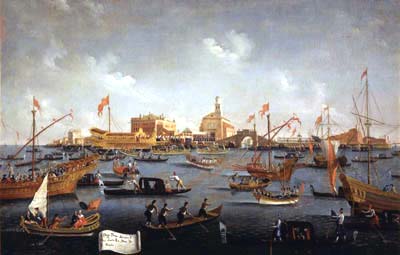 Thursday marks the Solemnity of the Assumption—n.b., a holy day of obligation—and an occasion for some memorable traditions, most notably the blessing of sea water.

This is a custom we started at my parish several years ago (even though we are a long subway ride from the Atlantic Ocean). One of the priests collects some sea water in bottles and blesses it during Mass; it’s then used for sprinkling. (This being New York, the water is sometimes rather, um, fragrant.  And colorful).

Details behind this tradition:

It is a custom in many coastal regions in the US and Europe to have special blessings of the water – the sea or ocean – on the Feast of the Assumption. The custom originated in 15th century Italy, when a bishop traveling from Venice, during a storm at sea on the Feast of the Assumption, prayed and threw his pastoral ring into the sea from the ship — and the waters were calmed. In the US, these celebrations take place annually in Atlantic City, Camden, Long Island, and in other coastal cities and seaports along the eastern seaboard. In some of these “blessings of the sea” celebrations, after the priest or bishop has blessed the water, the people wade out into the water and fill bottles with it, and apparently use it like regular holy water. The celebration in Atlantic City is called the “wedding of the sea”, and part of the ceremony is the bishop (or priest) throwing a wreath of flowers and a ring from a boat into the water, symbolizing the union of the city and the sea. A similar blessing and “wedding” is an annual event in European coastal cities — and especially Venice, where it is, understandably, a celebration of longstanding tradition.

And the story from Venice:

One of the oldest Venetian ceremonies, the Festa della Sensa, celebrates the naval power under Doge Pietro Orseolo. It began in the year 1000, when the naval fleet of the Serenissima – the Venetian Empire – departed on Ascension Day to attack Dalmatian pirates who were threatening the Istrian coast. The Venetian navy´s famous victory over the Slavic pirates was the beginning of the rapid expansion of the Serenissima´s political, commercial and military influence on the Adriatic Sea. The celebration of the Sensa began rather simply, as a procession of the the Doge upon the Dukal Galley (that lately became the famous Bucintoro), would be followed by a fleet of boats to the entrance of the port at the Lido, where the Bishop of Olivolo (Castello) blessed the waters of the Sea in peace and gratitude. The same anniversary was used to remember successive important diplomatic triumphs, and the ceremony became more complex and dazzling. In 1177 the two largest European powers of the period signed a peace agreement in Venice which ended the long struggle between the Papacy and the Empire. This came about principally due to the diplomatic involvement of Doge Sebastiano Ziani. Pope Alessandro III, as a mark of his gratitude to the city, gave the Doge a blessed ring, pronouncing “Ricevilo in pegno della Sovranità che Voi e i successori Vostri avrete perpetuamente sul Mare” (Receive this ring as a token of sovereignty over the sea that you and your successors will be everlasting). He then imposed the wedding between Venice and the Sea “Lo sposasse lo Mar sì come l´omo sposa la dona per essere so signor” (Marry the sea as a man marries a woman and thus be her Lord).