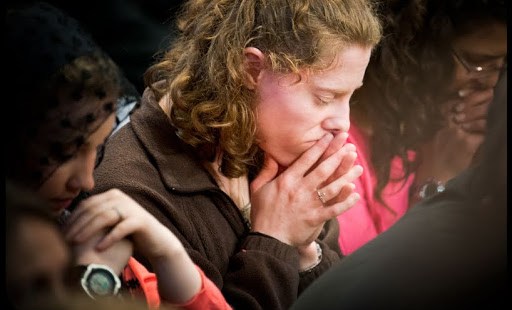 DR
woman praying
Share
Print
Deacon Greg Kandra | Jul 01, 2017
While a lot of us are getting ready to fire up the grill or head for the beach or the lake this holiday, let me take you this morning to someplace altogether different.

It is a racetrack in Ukraine in the middle of a torrential downpour.

That is where a million believers found themselves in June of 2001, as they gathered to watch Pope John Paul II celebrate Mass.

The great Vatican reporter John Allen was there and described what he saw: hundreds of thousands huddled under umbrellas, wearing ponchos, waving small Vatican flags, straining to catch a glimpse of the pope.

As the crowd was gathering, Allen noticed one young woman, on her knees in the mud, weeping. He walked over to her and asked if she would mind telling him what moved her so deeply.

In halting English, she explained. Her grandfather had been a Greek Catholic priest—a member of one of the Eastern Catholic churches in which priests are married. During the purges in the country, her grandfather was rounded up and sent to the gulag.

He had committed the unforgivable crime of being a priest.

For that crime, he was not only jailed. He was also tortured and starved and beaten. Despite all that, he refused to renounce his faith.

Finally, the guards killed him. In a grotesque perversion of the crucifixion, they nailed him upside down to the prison walls.

Then the woman telling the story explained what had really brought her to tears.  It lay in the fact that the Soviet Union had dissolved, and that religion was no longer outlawed.

“I’m imagining what my grandfather must be feeling today,” she said, “looking down from heaven and seeing the Holy Father standing on Ukrainian soil.”

Allen later wrote: “There is something so precious about faith in Christ, and membership in the Church, that when push comes to shove, ordinary people will pay in blood rather than let it go.” He concluded: “The martyrs offer us the two most precious commodities in the spiritual life: hope and perspective.”

It is a hope and perspective I think we all need this weekend.

Before opening that beer and broiling the burgers, remember what this holiday is about.

It’s about independence, yes. And freedom.

This weekend, let us remember in a special way, the freedom of religion.

The freedom to worship, to pray, to live as our conscience dictates.

Remember how fragile this freedom is—and how so many others around the world do not have it.

Remember the Christian men, women and children of Iraq and China and India and Pakistan and Egypt.

Remember the martyrs whose names we will never know—like that holy priest in Ukraine and the countless others like him who died for what they believed.

And remember: this, too, is part of what it means to be a follower of Christ.

Not long ago, the Chaldean archbishop from Iraq visited my office. He put things in perspective.

“Christian persecution is nothing new,” he said. “It began on Good Friday.”

And it continues on a scale that is almost beyond imagining. A couple months ago, the Pew Researcher Group released a study that confirmed what many already know: Around the world, Christians by the millions suffer persecution more than any other religous group.

We should be horrified.

But we shouldn’t be surprised.

The Gospel from Matthew we heard this morning continues Christ’s exhortation from last week, when he warned his apostles that there would be suffering.

“Whoever does not take up his cross and follow me,” he said, “is not worthy of me.”

And as we heard, St. Paul underscored what is at stake:

Yet, in the face of that, the Gospel message remains one of unflinching hope.

Remember these words of Jesus from last week: “Do not be afraid of those who kill the body but cannot kill the soul. Fear no one.”

I know: it’s easier said than done. In a time of terror, fear is almost a way of life.

But the Christian life stands in defiance of fear.

It stands for faith.

It stands with hope.

The Christian life stands, above all, for love.

As Paul told us in his famous letter to the Corinthians, “Love never fails.”

And love continues to bear witness in astonishing ways.

I’m still moved when I remember the video I saw several months ago, showing the Iraqi soldiers who, in battling ISIS, liberated the Christian town of Qaraquash in Iraq.

The soldiers took a long stick and broke it in two to create a cross, and tied the pieces together with rope and placed it atop the town’s church.

They blessed themselves to pray and give thanks to God.

They rang church bells in the town for the first time in two years.

They entered the church and kissed its walls, and then looked around. They saw decapitated statues of Mary and the saints, and prayer books that had been burned and pews that had been overturned and torn apart.

They soldiers looked around what remained of the church.

Then they knelt and prayed in Aramaic, the language of Jesus. “Holy Mary, mother of God, pray for us sinners now and at the hour of our death.”

This is faith. This is hope. This is love.

This holiday, when you think of the freedoms we are blessed with in this country, remember those places where the blessings of liberty have been denied.

When you come forward for the Eucharist, the Body of Christ, remember the broken Body of Christ around the world that continues to suffer.

Give thanks for all we have been given. But remember our brothers and sisters who are being persecuted for believing what we believe, for practicing what we practice, for praying what we pray.

Today, lift them up in prayer. Remember all the unknown martyrs of our age.

They remind us of the message in today’s gospel: that discipleship comes with a cost—and a cross.

May God give us the grace to carry ours with the same faith, and hope, and love.