The Gospel According to Trump 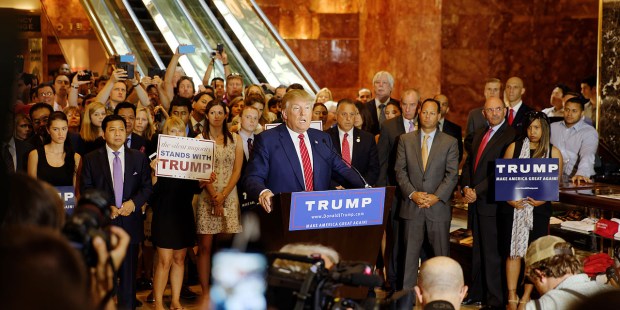 In the Gospel According to Trump, there is only one blessedly normal, all-American faith: mainline Protestant Christianity. The Presbyterians, the Methodists, the Baptists — those believers who once made up this country’s midcentury religious mainstream — are Mr. Trump’s “chosen ones.” He regards their customs and values as essentially as American as apple pie, while all other faith communities, even other forms of Christianity, seem to rest somewhere on a spectrum from exotic to sinister.

Take Mr. Trump’s bizarre speech last month to the Republican Jewish Coalition, where he kept inexplicably returning to the same well-worn tropes that anti-Semites have been using for a century. “I’m a negotiator, like you folks,” he proclaimed to the crowd. Later, he sought to signal defiant distance from the Republican establishment by informing them: “You’re not going to support me because I don’t want your money.”

While speaking to a crowd of Florida supporters in October, Mr. Trump publicly hinted that there might be something nefarious about Ben Carson’s Seventh-day Adventist faith. “I’m Presbyterian,” Mr. Trump said. “Boy, that’s down the middle of the road, folks, in all fairness. I mean, Seventh-day Adventist, I don’t know about. I just don’t know about.”

More recently, he tried to blunt Ted Cruz’s surge in the Iowa polls by using the senator’s Cuban heritage to exoticize his Christian faith. “I do like Ted Cruz,” Mr. Trump said at a rally in Des Moines, “but not a lot of evangelicals come out of Cuba.”

There is an absurdity in seeing Donald Trump trying to play the role of 2016 religion referee. This is a man whose sincerest praise for the Bible is to deem it even better than his best-selling book “The Art of the Deal,” a man whose most famous religious experience is having reportedly struck up a romance with his second wife among the pews of a Manhattan church (while he was still married to Ivana).

But Mr. Trump’s religious posturing is not about theology, it’s about branding — and if his religious worldview seems impossibly dated, that’s by design.

Read on to learn why.