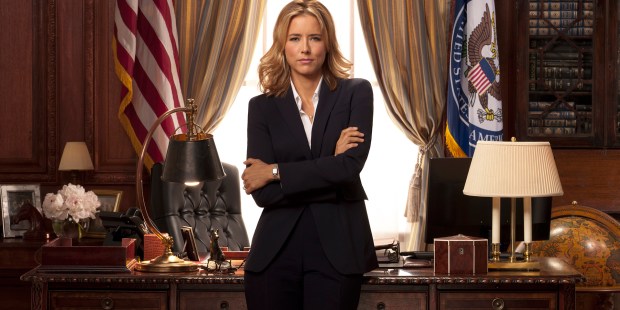 Share
Print
Deacon Greg Kandra - published on 05/09/17
At least one observer was pleasantly surprised at what unfolded Sunday night on the hit CBS series “Madam Secretary”:

In the world of entertainment, if a single woman faces an unplanned pregnancy after sleeping with a man she barely knows, that man ends up dying and thus can’t help her support the baby, and her parents are “church people” who she fears may judge her, abortion is almost always the automatic answer given as a solution to her dilemma.

On the May 7 episode of Madam Secretary, “The Seventh Floor,” however, that exact scenario resulted instead in an encouraging pro-life, pro-motherhood speech by Secretary Elizabeth McCord (Tea Leoni) to newly pregnant Daisy Grant (Patina Miller), after Daisy expressed fears about handling motherhood on her own after the CIA operative she briefly dated was killed.

Read on to see how it happened and to watch the scene in question.

It’s worth noting that the creator and executive producer of “Madam Secretary” is Catholic convert Barbara Hall, who has spoken publicly about her faith (and its role in this particular show):

Talking to CatholicVote …at a press event in Beverly Hills, California, Hall, an adult convert to Catholicism, says of Henry, (the Secretary of State’s husband) “He’s Catholic. I think he’s cradle Catholic; we establish that in an upcoming episode. He has a vast life experience, but he’s a religion scholar, also. So, he has a perspective on world religion, but his own practice is Catholic. I think he still practices.”

Told that seeing an actual practicing Catholic (who’s not a monk, priest or nun) on TV would blow people’s minds, Hall says, “Well, stick around. You know that I’m fascinated by depicting religion in a way that confounds people’s expectations, because, not unlike politics, that’s a world that we need to expose to popular culture.

“It’s a fascinating world. I think it’s really fun to reveal that in a more realistic way. I had an opportunity to do that, so I did.”

Some years back, Hall had this to say about her own faith journey:

“I spent a lot of time without a spiritual life and without a religion,” she said. “[Because of that] I feel like I know how to talk to people without making them feel alienated. I feel like I understand how to invite them to the discussion … I have nothing to preach. My thing is, I have questions. I have observations and I’m the last person on earth to be preaching to you about anything. But I want to have the discussion.”