There at the Beginning: Two Deacons Celebrate 40 Years of Ministry

From the Catholic Key, a rare and fascinating glimpse at the lives of two men who might be considered pioneers:

June 11 was a memorable day for Deacons Don Schmit and Dick Muraski. It was the 40th anniversary of their ordination to the Order of Permanent Deacons in the Diocese of Kansas City-St. Joseph. The two deacons, surviving members of the first diaconate class in the diocese, have for 40 years, with their families, embraced their ministry in the everyday world much as St. Stephen did. St. Stephen, considered the first deacon, was appointed with six others, by the Apostles to distribute food and aid to the community’s poor. What little is known of him is recounted in the Acts of the Apostles, chapter six. For the better part of eight centuries following his martyrdom, the Order of Deacons was a strong apostolate. Then over the next 1,200 years, the permanent diaconate waned and almost disappeared. By 1900 the role of Catholic deacons had become solely a transitional step on the path to priestly ordination. Restoring the Order became a hot topic during the Second Vatican Council (1962-65). In June 1967, Pope Paul VI began restoration of the Permanent Diaconate, as the Council had suggested. His apostolic letter, the “Sacred Order of the Diaconate,” allowed countries who wished to restore the Order to do so. In 1968 the U.S. Bishops Conference requested restoration of the permanent diaconate and the following year, the first diaconate classes in the Archdioceses of Washington and Baltimore and the Diocese of Richmond were in formation. Those first classes were ordained in 1971. That same year the first diaconate class in this diocese was formed. That first class was comprised of seven men, Deacon Dwayne Katzer, diocesan Director of the Diaconate, said, reminiscent of the calling of those first deacons. The seven men — Richard J. Muraski; Donald Schmit; Robert Miller; Louis Falcon; Antonio Sandoval; Vincent O’Flaherty, Jr., and George Kopp — began a two-year formation program at Rockhurst University and were then ordained by Bishop Charles Helmsing at the Cathedral of the Immaculate Conception June 11, 1973. 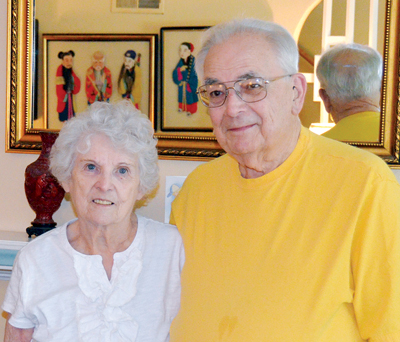 Deacon Don Schmit and his wife Jenny just celebrated their 65th wedding anniversary. “I’m 89 years a person, 65 a husband, 63 a father and 40 a deacon,” he said. The couple raised five children, four of whom are still living. Relaxing in his recliner in the living room, he recalled his ministry’s beginnings as a charismatic movement leader. “The first charismatic prayer meeting in this area,” he recalled, “was started in this living room around 1970. Jenny and I had heard about the charismatic renewal movement and wanted to learn more. Three of us went to the Evangelistic Center on Truman Road to hear a priest speak about it and had a religious experience. The pastor laid his hands on our heads and we prayed. We’ve never been the same.” …Deacon Don and Jenny Schmit love spending time with their four living children — their son David passed away during the 2002 ice storm. “We have 8 grandchildren,” Jenny said, “and 9 living great grandchildren, we lost one. All our kids are so good to us.” Don: “Jenny is the most gentle, loving person I’ve ever met,” he said. “Without her I wouldn’t, I couldn’t, have done any of this. Married 65 years, and still in love!” A few days later and a couple of miles away, Deacon Dick and Beattie Muraski sat on their front porch, enjoying breakfast while chatting and recalling the 40 years of Dick’s ministry… …Dick and Beattie became interested in the Christian Family Movement when they realized they wanted “something besides marriage, children, making money and having a good time.” The Muraskis volunteered in Georgia for three summers, helping establish Confraternity of Christian Doctrine (CCD) classes in Claxton, and with a grant from the Catholic Church Extension Society, helped build a church and rectory. 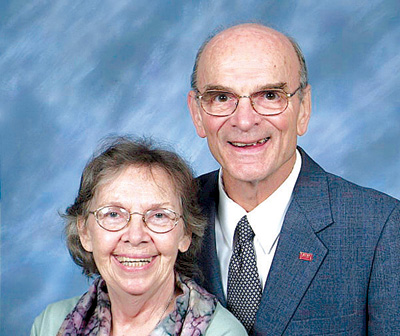 Beattie recalled discussions of how great it would be “if we could work full time for the Church and still feed the kids.” They contacted several missionary groups, but were “politely turned down when we told them we had five kids!” When Bishop Helmsing reinstated the Permanent Diaconate in 1971, Msgr. Tighe suggested Dick Muraski as a candidate for the first class. After his ordination, “Deacon Dick” was assigned to work at the Chancery as coordinator of marriage and family life. “Dick traveled all over the diocese to develop this ministry,” Beattie said and Dick added, “I basically taught people who were going to teach other people about marriage and families.” The next decade was a busy one. In 1976 he was elected regional representative to the National Commission on Marriage and Family Life. In the early 1980s, he helped devise and develop Prepare II, the sacramental marriage preparation program for engaged couples.

There’s much more. Read it all. Congratulations, deacons—and thank you to you and your wives!  Ad multos annos!

It strikes me that a great project for an enterprising historian might be to collect oral histories of some of the men who were among the first ordained as deacons after Vatican II.  The ministry has changed and evolved over the last four decades—a two-year formation program?!—and it would be valuable, I think, for those men who were there at the beginning to share their memories and experiences and preserve them for future generations.