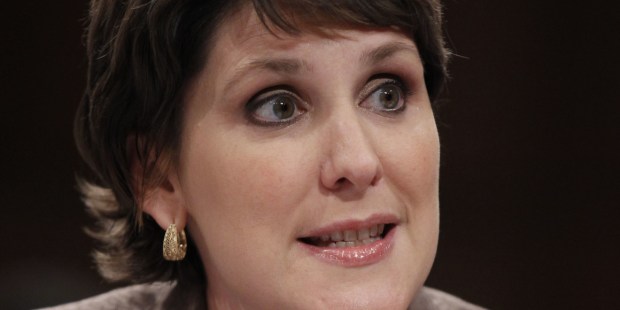 President Donald Trump on Friday said he would name one of the most prominent anti-abortion activists in the nation to a top communications post at the Department of Health and Human Services.

Charmaine Yoest, tapped to be to be assistant secretary of public affairs, is a senior fellow at American Values. She is the former president of Americans United for Life, one of the most prominent anti-abortion groups in the country, which has been instrumental in advancing anti-abortion legislation at the state level to restrict access to the procedure.

The assistant secretary of public affairs shapes communications efforts for the entire agency. Yoest’s appointment comes at a time when states with Republican governors and GOP-dominated legislatures have enacted a wave of new abortion restrictions, many of which have been blocked in court.

States added 57 new abortion restrictions annually between 2011 and 2015, a pace that picked up dramatically following the 2010 midterm elections, according to the Guttmacher Institute, a research organization that supports abortion rights.

From her Wikipedia entry:

Yoest earned a Ph.D. in politics at University of Virginia in 2004, writing a dissertation on the politics of parental leave. She has received fellowships from several foundations, including Mellon, Olin, Bradley, and Kohler. She also worked as a policy analyst at the Family Research Council from 2005 to 2008, eventually rising to Vice President.

In 2008 she was a senior adviser to Mike Huckabee’s 2008 presidential campaign. Yoest was called to testify before the Senate Judiciary Committee during the July 2009 confirmation hearings forSupreme Court nominee Judge Sonia Sotomayor, whom Yoest unsuccessfully opposed. In 2009, Yoest was diagnosed with breast cancer and underwent six months of chemotherapy. On July 1, 2010, Yoest testified before the Senate Judiciary Committee at the confirmation hearings for Supreme Court nominee (and Solicitor General) Elena Kagan. Yoest also opposed Kagan’s nomination and called for a Senate investigation into alleged discrepancies in Kagan’s testimony related to partial-birth abortion.  In 2012, Yoest was appointed to the Congressional Award Board by Senate Republican Leader Mitch McConnell.

Yoest was president and CEO of Americans United for Life for several years. In 2016, she joined Gary Bauer’s group American Values as a senior fellow.