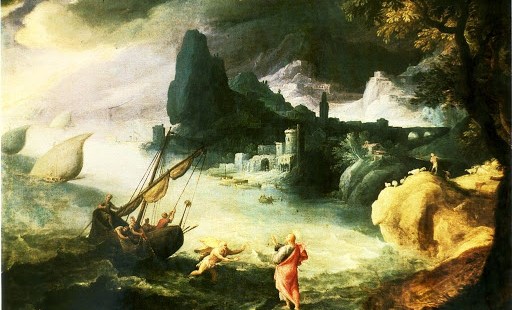 WikiCommons
Share
Print
Deacon Greg Kandra | Aug 12, 2017
A few days ago, a friend of mine posted something beautiful on Facebook—a remembrance from a colleague of hers, Vince Rinehart, writing about his mother, who had just died. She had been widowed at a young age and raised six children. But that was just the beginning.

My mother, Beall L. Comstock, died this afternoon at Medstar Georgetown Hospital of complications from pneumonia and other ailments. She was 96. She died in peace and without pain.

Her defining quality was her Catholic faith. It was something she lived, and acted on, rather than talking about. It wasn’t the phony faith of the politician-stuffed, self-congratulatory prayer breakfast or the preacher claiming divine authorization for killing some head of state. It was Matthew 25. Read that passage and you will know why she worked for more than 20 years at the Zacchaeus soup kitchen in D.C. alongside other volunteers from her church, Blessed Sacrament near Chevy Chase Circle. She did hours of food prep work at home, collected donated food from supermarkets and then did hard, heavy work at the soup kitchen. She bonded with many of the homeless. If you want to know her essence, consider this story, which my youngest sister, her primary caregiver for many years now, reminded me of this week: One day, when she was nearing 90, she fell at her condo and suffered a spine fracture. It was a Monday. She went downtown, worked her full shift at the soup kitchen, and then went to the hospital.

She lived an incredible life. I am glad she is no longer suffering, but when it comes to losing your mom, it makes no difference: it hurts as much at 62 as it would at 6. Godspeed, Mom. You will be wearing wings the size of a 747.

My first thought in reading that was: what a beautiful tribute.

But my second thought was: What a witness and what a life. Beall Comstock did what Peter did in this Gospel. She answered Christ’s call.

And: she walked on water.

This Gospel tells us that being able to do that is more than an act of faith. Much more.

It is also an act of obedience. It is being able to answer Christ, his call to “come,” his invitation to get out of the boat, to leave what is safe, and do what seems impossible.

And it was losing courage that ultimately caused Peter to sink.

“When he saw how strong the wind was, he became frightened.” And then, he began to sink.

This Gospel offers us, in some ways, the same message we heard last week, and Jesus even used the same words to his apostles:

I know: it’s easier said than done. But Christ’s call to Peter is his call to us—just as it was his call to Beall Comstock and to countless other people of faith across history.

How often do we feel the winds are against us?

How often do we feel that answering the call of Christ, his invitation to “Come,” is just too hard?

How often would we rather cling to what is safe and sure and just stay in the boat?

This Gospel turns all those doubts on their head.

Make no mistake: following Christ, answering his call, entails risk. Being faithful can be fraught with danger. Standing up to the winds of our age, or going against the tide, can be frightening.

Look at what we are up against. Read the headlines. Right now, we are facing the winds of war. In Virginia, we are encountering winds of racism and hate. Half a world away, our brothers and sisters are buffeted by winds of poverty and persecution and even martyrdom.

He calls us to be people of courage.

In spite of everything: “Do not be afraid.”

There’s an important detail at the end of of this Gospel that can be easy to overlook. Jesus didn’t leave his apostles alone and continue his walk across the water by himself.

No. He saved Peter from sinking—and then got into the boat with him. Together, they continued the journey.

When it comes to weathering the wind and the waves of life, we are all in the same boat—but we are not alone.

Christ is with us.

In part of his tribute, Beall Comstock’s son wrote about traveling with her to Ireland and visiting Galway, where his grandmother had been born.

She no doubt knew well the famous “Breastplate of St. Patrick”—an ancient prayer that has inspired generations of Irish Catholics and still speaks to us today, especially in light of this Sunday’s Gospel:

As we prepare to receive Christ in the Eucharist, and carry him within us into the world, let’s also carry the lesson of this Gospel in our hearts.

Whatever may come, stand up to the wind. Do not be afraid.

Because in the end, we are all in the same boat.

But we are not alone.