WATCH: Tightening security around the Vatican ahead of Trump visit 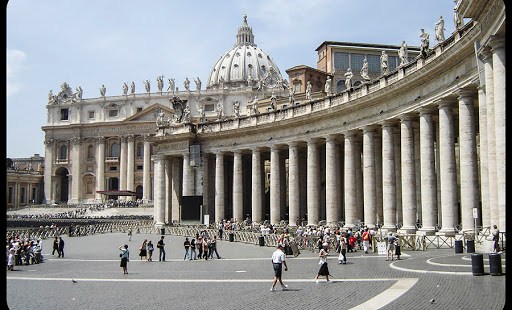 Public Domain
http://commons.wikimedia.org/wiki/File:Vatican.JPG
Share
Print
Deacon Greg Kandra - published on 05/23/17
Only hours before the historic meeting between the pontiff and the president, bomb disposal experts are at work tightening security around the Vatican. Check out the video below.

Meantime, the schedule Wednesday will be pretty full:

The hospital is located near the Vatican, on Rome’s Janiculum hill, next door to the Pontifical North American College, the seminary established to train priests for the United States.

The president and first lady will meet briefly with Pope Francis at 8:30, before taking a tour of St. Peter’s Basilica.

The Bambino Gesù was founded in 1869, and is now considered the most important children’s hospital in Italy.

Francis has taken a keen interest in the hospital, making a three-hour visit at Christmas in 2013, the year he was elected.

…Also travelling with the president to the Vatican is his daughter, Ivanka. While in Rome, she will meet with the Community of Sant’Egidio to discuss efforts to combat human trafficking.

And what will the two leaders have to talk about? Some ideas:

Neither the U.S. government nor the Vatican has said much about what will be discussed at the May 24 encounter between the pontiff and the new American president, but the White House issued a statement May 4 saying the meeting is to “discuss cooperation between the United States and religious communities in areas of joint concern.”

“Trump will no doubt want some help with the Middle East, since that’s the most neuralgic spot in the world at the moment,” commented Robert Royal, president of the Faith and Reason Institute and editor in chief of The Catholic Thing. “He’s been edging towards ‘safe zones’ there, an idea long spoken of for Syria, etc., that would help stem refugee flows and provide some sort of life for people without the need to flee their own lands and cultures. If so, I expect Francis will still push accepting more refugees and immigrants. That will not go very far, I fear.”

I would expect that notable Catholics Sean Spicer and Kellynne Conway will be there, among others.