When a Catholic marries a non-Catholic: what about the kids? 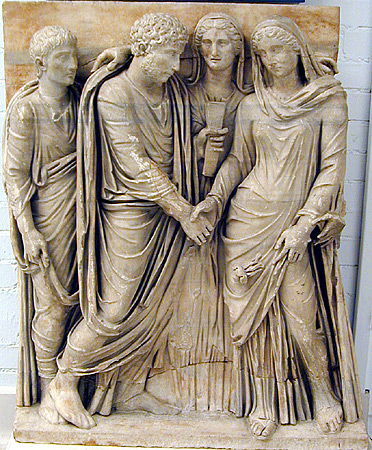 Recently this question popped up in a newspaper column by Rabbi Marc Gellman:

Our children attended religious school and were bar and bat mitzvahed. Our son, now 30, has been dating a wonderful woman for two years and they’re contemplating marriage. She’s Catholic and wants her children to be baptized and confirmed. Our son wants his son to have a bris and his children to be bar or bat mitzvahed. Their discussions about religion usually end without resolution. At one point, they thought about raising any children with either no religion or both religions. At this point, they feel the need to either marry or break up. They love each other very much. Can a child be raised both Catholic and Jewish? Will the church and the synagogue allow this? Being raised with both religions would seem to me a better option than with no religion.

Read on for other advice he offers.

The Catholic Church has clear canonical guidelines: the Catholic spouse must sign a document before the wedding promising “to do all in his or her power” to have any children baptized and raised Catholic.

This provision of the 1983 Code of Canon Law – with its wording to try one’s best – is a change from the 1917 version, which required an absolute promise to have the children raised Catholic. Likewise, the non-Catholic spouse is no longer required to promise to raise the children in the Catholic faith, but “to be informed at an appropriate time of these promises which the Catholic party has to make, so that it is clear that the other party is truly aware of the promise and obligation of the Catholic party,” the code states. But suppose the non-Catholic party insists that the children will not be raised Catholic? The diocese can still grant permission for the marriage, as long as the Catholic party promises to do all he or she can to fulfill that promise, Hater writes. The marriage may be legal, he notes, but is it a wise choice? Those are questions that may also need to be explored in marriage preparation. If children are raised in another faith, he notes, “the Catholic parent must show children good example, affirm the core beliefs of both parents’ religious traditions, make them aware of Catholic beliefs and practices and support the children in the faith they practice.”

There’s much more at the For Your Marriage website.

The catechism offers this:

1633In many countries the situation of a mixed marriage (marriage between a Catholic and a baptized non-Catholic) often arises. It requires particular attention on the part of couples and their pastors. A case of marriage with disparity of cult (between a Catholic and a non-baptized person) requires even greater circumspection.1634Difference of confession between the spouses does not constitute an insurmountable obstacle for marriage, when they succeed in placing in common what they have received from their respective communities, and learn from each other the way in which each lives in fidelity to Christ. But the difficulties of mixed marriages must not be underestimated. They arise from the fact that the separation of Christians has not yet been overcome. The spouses risk experiencing the tragedy of Christian disunity even in the heart of their own home. Disparity of cult can further aggravate these difficulties. Differences about faith and the very notion of marriage, but also different religious mentalities, can become sources of tension in marriage, especially as regards the education of children. The temptation to religious indifference can then arise. 1635According to the law in force in the Latin Church, a mixed marriage needs for liceity the express permission of ecclesiastical authority. In case of disparity of cult an express dispensation from this impediment is required for the validity of the marriage. This permission or dispensation presupposes that both parties know and do not exclude the essential ends and properties of marriage; and furthermore that the Catholic party confirms the obligations, which have been made known to the non-Catholic party, of preserving his or her own faith and ensuring the baptism and education of the children in the Catholic Church.1636Through ecumenical dialogue Christian communities in many regions have been able to put into effect a common pastoral practice for mixed marriages. Its task is to help such couples live out their particular situation in the light of faith, overcome the tensions between the couple’s obligations to each other and towards their ecclesial communities, and encourage the flowering of what is common to them in faith and respect for what separates them.1637In marriages with disparity of cult the Catholic spouse has a particular task: “For the unbelieving husband is consecrated through his wife, and the unbelieving wife is consecrated through her husband.” It is a great joy for the Christian spouse and for the Church if this “consecration” should lead to the free conversion of the other spouse to the Christian faith. Sincere married love, the humble and patient practice of the family virtues, and perseverance in prayer can prepare the non-believing spouse to accept the grace of conversion.