When the Religion They Hated Was Ours 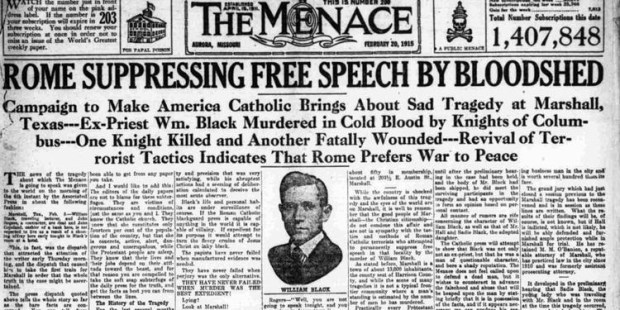 Share
Print
Deacon Greg Kandra - published on 12/09/15
The Los Angeles Times takes a look back at a newspaper whose stunning popularity fed into a virulent strain of anti-Catholicism in the early 20th century:

The year was 1915, and the strange new newspaper in Aurora, Mo., had grown so quickly in its first four years that rail officials had to build extra tracks for all the paper and printing materials suddenly rolling into town.

The Aurora post office, according to one account, more than tripled its staff to handle mail to and from the publication’s astonishing 1.5 million weekly subscribers — a circulation that dwarfed the largest daily newspapers in New York and Chicago.

Hatred had become big business in southwestern Missouri, and its name was the Menace, a weekly anti-Catholic newspaper whose headlines screamed to readers around the nation about predatory priests, women enslaved in convents and a dangerous Roman Catholic plot to take over America.

“The cowardice of a Roman thug has no parallel in either the human or animal kingdom,” the newspaper frothed in one 1914 edition, calling for “men with red blood in their veins” to defend women and children from Catholics. “If we are compelled to live in this county with Romanists, as our weak-kneed Protestant critics say we are, the Romanists will have to be taught their place in society.”

America’s deep and widespread skepticism of Catholics is a faint memory in today’s post-Sept. 11 world. But as some conservative politicians call for limits on Muslim immigration and raise questions about whether Muslims are more loyal to Islamic law than American law, the story of Aurora’s long-ago newspaper is a reminder of a long history of American religious intolerance.

Today, there are calls for federal surveillance of mosques in the name of preventing terrorist attacks; a century ago, it was state laws that allowed the warrantless search of convents and churches in search of supposedly trapped women and purported secret Catholic weapons caches.

“I see huge parallels,” said Sharon Davies, executive director of the Kirwan Institute for the Study of Race and Ethnicity at Ohio State University. “I think we haven’t seen anything quite like this since the beginning of the 20th century, when we passed laws that permitted the Catholics to be treated in ways that no other religious group was treated.”