Why Monaco’s Princess Wore White to Meet the Pope 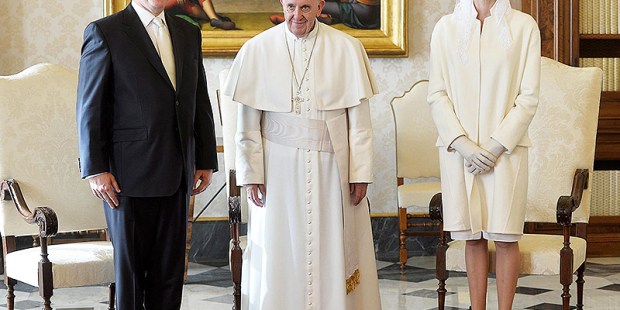 Share
Print
Deacon Greg Kandra | Jan 18, 2016
The other day, I posted an item about Princess Charlene of Monaco’s impending audience with Pope Francis and the story behind her deep faith.

The meeting happened Monday—and it’s worth noting what she was wearing and why:

She is one of seven women in the world that has been given “the privilege of the white” – or the ability to wear white when meeting with the pope.

Called le privilége du blanc in French or il privilegio del biacno in Italian, the special tradition is extended solely to designated Catholic queens and princesses and is usually reserved for important events at the Vatican like private audiences, canonizations, beatifications and special masses. According to protocol, other women who meet with the pope are asked to wear black clothes and a matching mantilla, or a lace veil worn over the head. First Lady Michelle Obama followed this rule in 2009 when she joined President Barack Obama in visiting Pope Benedict XVI.

Of course, wearing black (or white) is not required for women who meet with the pope. As head of the Church of England, Queen Elizabeth II has previously worn black and a mantilla when meeting with Pope John Paul II and Pope John XXIII, but she hasn’t followed the protocol in more recent visits.