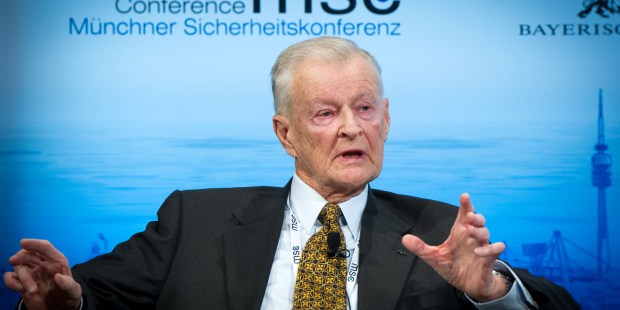 Zbigniew Brzezinski, the hawkish strategic theorist who was national security adviser to President Jimmy Carter in the tumultuous years of the Iran hostage crisis and the Soviet invasion of Afghanistan in the late 1970s, died on Friday at a hospital in Virginia. He was 89.

His death, at Inova Fairfax Hospital in Falls Church, was announced on Friday by his daughter, Mika Brzezinski, a co-host of the MSNBC program “Morning Joe.”

Like his predecessor Henry A. Kissinger, Mr. Brzezinski was a foreign-born scholar (he in Poland, Mr. Kissinger in Germany) with considerable influence in global affairs, both before and long after his official tour of duty in the White House. In essays, interviews and television appearances over the decades, he cast a sharp eye on six successive administrations, including that of Donald J. Trump, whose election he did not support and whose foreign policy, he found, lacked coherence.

Mr. Brzezinski was nominally a Democrat, with views that led him to speak out, for example, against the “greed,” as he put it, of an American system that compounded inequality. He was one of the few foreign policy experts to warn against the invasion of Iraq in 2003.

He grew up attending Catholic schools in Poland, and had strong positive feelings for his country’s most celebrated spiritual leader:

To me, Pope John Paul II is the first true spiritual and religious leader on a global scale in the history of mankind. Up until now, all religious leaders appealed to a limited audience both theologically and geographically. John Paul II overcomes these limitations not only by effectively and skillfully using the mass media, but also by the power of his personality and his deep spirituality.

At the same time, as far as the Catholic faith is concerned, the Pope strives to strengthen and rebuild the Church which has gone somewhat astray after the post Vatican II reformatory zeal. The way I see it, the Pope wants to ensure that the Church remains the guardian of faith, while preventing ecumenism from degenerating into indifference.