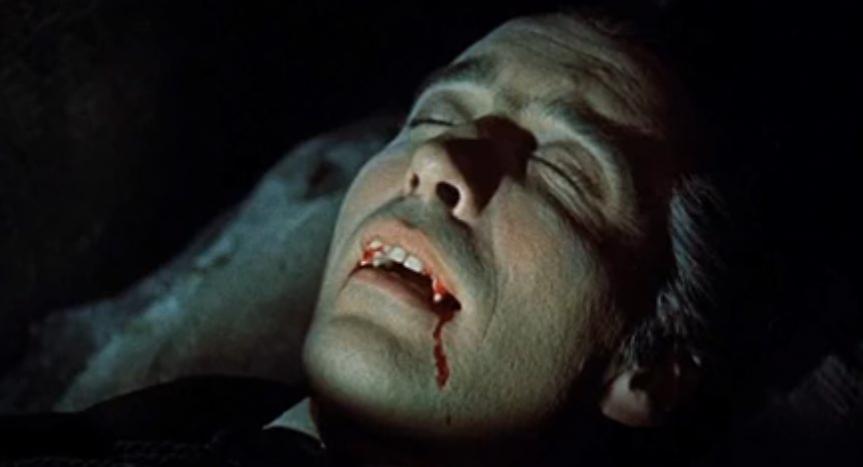 By Screenshot from “Internet Archive” of the movie Dracula (1958) [Public domain], via Wikimedia Commons

Because we are integrated Catholics, we observe All Saints Day, All Souls Day, and Halloween — the latter, by trick-or-treating, putting the little guys stickily to bed, and showing the older kids a scarier movie than we normally allow.  And because I’m still in denial about just how many outrageous promises I carelessly made about costumes I’d be happy to whip up, I’m thinking hard about what movie we’ll show this year.

There are a bunch of mildly scary movies we can show the little guys: Curse of the Were-Rabbit is a favorite; and it’s fun to watch Abbot and Costello meet various creatures. And there’s always The Munsters, which is a truly terrible show, but the little guys love it.

What to show the middle kids and older kids? It needs to be scary, but not too scary.  There are plenty of flat-out terrifying movies out there, but we’re looking for one that don’t introduce any themes or images that kids aren’t ready to deal with.  Pure slasher movies, I oppose for people of any age, as I can’t imagine how you can learn to enjoy watching them without disastrously deadening some part of your soul.  I’m also not a fan of supernatural horror movies, which give people the impression that religion is part dopey, part freaky.

The year I wrote this post, we went with Arachnophobia(1990).  It was weird and funny, a well done, edge-of-the-seat creature feature.  It’s classified as a comedy/thriller, which hits the sweet spot for me:  The comedy makes us more vulnerable when the shocks come, but it also reminds us that it’s just a movie.  John Goodman as the exterminator is hilarious.

Much gorier and much funnier, and also very moving in places, is Shaun of the Dead(2004), one of my favorite movies in any genre.  It’s about a zombie near-apocalypse, but is just as much about friendship and love, and it convincingly shows the main character move from failure-to-launch slobhood to heroic manhood.  But it totally earns the R rating, mostly because of the truly horrifying gore.  We did let our 11-year-old watch this one.

We recently saw The Sixth Sense (1999) and Signs (2002). It beats me why The Sixth Sense is the more celebrated. It’s very good, but Signs is fantastic, and has so much more depth. It’s one of my favorite movies in general, and it will make you feel better whenever you start feeling down about Mel Gibson. The Village (2004) is pretty scary, but relies way too heavily on the plot twist; and, as I mentioned on the radio with Mark the other day, I had a hard time getting past the idea that the villagers would have bothered to pack things like decorative door hinges. I don’t pack like that.Unbreakable (2000) is tremendously underrated, so carefully crafted — Shyamalan’s best, I think.

Have I mentioned The Mummy (1999) often enough in past posts?  Yes?  All right, I’ll skip the details and just remind you that it really moves along, it has a heroine that you actually root for, and it doesn’t take itself too seriously.  Also, the scene where the guy knows something’s coming to get him but he can’t find his glasses?  Brrrrr.  The Mummy Returns (2001) is a worthy sequel.  The Mummy 3, I don’t know what the title is because I fell asleep before I got to the end of reading it, never mind watching the movie (2008) should be taken out and shot. When they replaced Rachel Weisz in the third one, you realized, “Ah, so it was Rachel Weisz who was holding the other two movies together.”

Some darker choices:  Alfred Hitchcock’s The Birds.  I always feel defensive when my kids watch a Hitchcock movie — the man was so hard on his viewers.  I still haven’t forgiven him for Vertigo.  The nerve, confusing me that way, and making me upset about those awful people with their plastic hair!  The Birds has a weird structure that makes it feel very dated. Vertigo is just nasty, but worth getting under your belt so you can enjoy High Anxiety.

Gaslight (1944). You think you know about this movie because you’re familiar with the term “gaslighting.”  So watch it and find out why it’s a classic.  So incredibly tense, so gorgeously black-and-white.  The acting is subtle and superb and the pacing is exquisite.  I’m adding it to my Netflix queue right now.

Diabolique (1954, not the apparently highly stinky 1996 remake).  ONE OF THE SCARIEST MOVIES I HAVE EVER SEEN.  You feel like you can’t even breathe for a good part of this movie.  Very tricky plot, very nasty direction, and horribly, horribly French.  Entirely effective if you feel like getting grabbed by the brain and shaken around for a while.

Lightening things up again:  Tremors (1990).  Okay, technically more of an action/adventure flick, but it will keep you on your toes.  This is how our Halloween movie tradition got started:  my son was so excited to be trick-or-treating, he bolted down the sidewalk, slipped on some dry leaves, and spent the rest of Halloween in the ER with a sprained wrist.  So we showed him Tremors as compensation.  It’s another combo of suspense, action and gore, with a satisfying and wholesome resolution.  Very likeable heroes, and the paranoid survivalist couple is a scream.

Army of Darkness (1992)  Just tons of fun.  The fact that the diabolical villains are called “Deadites” — because they’re dead – will give you an idea of the tone of this movie.  Brilliant slapstick, but scary enough that it’s not for anyone under the age of ten.  (Also a sexy scene or two, which we handle, if littler kids are watching, by putting a pillow over the screen.)

Rear Window(1954)  Another of my all-time favorites in any genre.  I have something of a Cary Grant problem — have a real hard time getting past his blue hair — which means I often have a Hitchcock problem.  But this movie features Jimmy Stewart instead, flexing his acting muscles on a character which is not as repellent as some Hitchcock heroes — but still, somethin’ ain’t right with that guy.  Love it.  And Grace Kelly and her astonishing dresses are so lovely, you don’t care that she’s kind of a dish of lukewarm pudding, actingwise.  Oh, and yes, it’s scary!  Suspenseful as all get out, and howlingly original in scope.

Island of Lost Souls is also on my to-watch list.  Reliable sources have assured me it’s super creepy.  It’s from 1932 with Charles Laughton, and is based on the novel The Island of Dr. Moreau by H.G. Wells.  IMDb’s plot summary:

An obsessed scientist conducts profane experiments in evolution, eventually establishing himself as the self-styled demigod to a race of mutated, half-human abominations.

Sigh.  I dunno, are we sure this same story isn’t featured in the latest issue of JAMA?  Anyway, Charles Laughton is always fun to watch.  Also stars Bela Lugosi.

Speaking of Bela Lugosi, how about Dracula?  1931, the one and only year that saw the production of a genuinely scary vampire movie.  Unless you include The Lost Boys (1987), assuming you can’t think of anything scarier than rice that turns into maggots — SCARY MAGGOTS, WHICH IS SO MEAN, YOU AWFUL VAMPIRES, YOU! Although Corey Haim bopping in the bathtub is genuinely horrifying.  That recent Nosferatu movie stank on ice, in the way that only John Malkovich can make something stink on ice (that is, pretentiosly).  I have heard that 30 Days of Night (2007) is terrifying — so much so that I don’t even think I can acknowledge that it exists.

Addendum: Okay, fine, I guess Dracula (1958) with Christopher Lee, and Peter Cushing as Van Helsing, is a good one, too. We’ll probably watch that one this year. 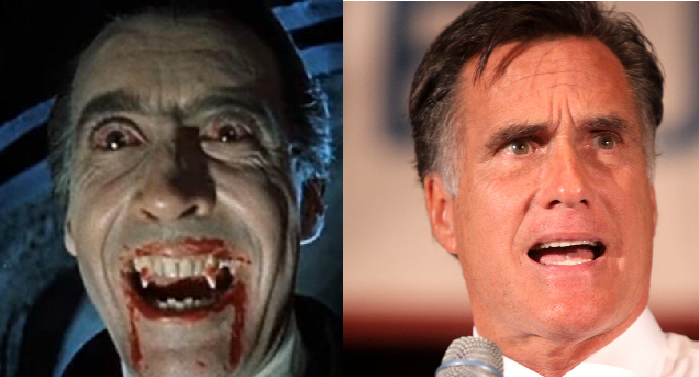 This has nothing to do with anything; I just think it’s funny.

The older ones (we have three in high school this year) may go with The Silence of the Lambs(1991). I may be too chicken to join them.

A version of this post originally ran at the Register in 2012, back when I got all embroiled in the comments box, because someone made the following comment:

As evidence of my personal spiritual growth, I’d like to point out that I did not title this post “Tw*t” and a Possible “C*nt.”