7 Quick Takes: “Harder than it has to be” Edition

So, Jen from Conversion Diary designed this nice little 7 Quick Takes  system for us bloggers.  It bumps up your traffic, it automatically gives your post a semi-professional look, with the nifty graphic and all: 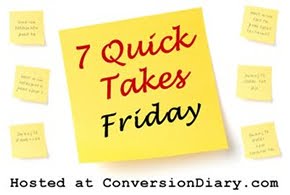 And above all, it’s easy.   For once, you don’t have to come up with a unifying theme.  You can just babble about seven random things that occur to you — seven orphaned ideas which never quite grew up into anything, but which you aren’t quite ready to discard.  You can tell about a book you just read, or you can complain about the heat.  You can put a picture of the gross thing that fell out of the car seat when you finally got around to adjusting the straps, once you finally stopped lying to yourself about how 18-month-old children are probably happily reminded of the womb when they’re folded in half like a sweaty empanada.  And before you know it, your post is all done.

But that’s just too disorderly for me.  Now, looking at my house, you’d never think, “Here at last is someone who loves order.  Yes yes, this is someone who cannot bear chaos,  and who labors long and hard to institute structure and harmony into her personal life.”  Okay, so if you’re talking about my living room, then, no.  I’m just happy when all four feet of the couch on resting on the floor simultaneously, or when the drips of unidentifiable goo are dry, and not still visibly oozing down the walls.

So that’s my house.  But when it comes to writing, I’m like the chickens in Chicken Run:  I’M ORGANIZED.  I don’t feel right unless my writing has some kind of unifying theme (although I reckon I sometimes do a great job of keeping that theme a secret).  So every Friday, I ruin a perfectly good opportunity to be random, and I choose a topic for my 7 Quick Takes.  So far, I’ve chosen The Outdoors, Hope This Helps and Toys.

Well, Friday kind of snuck up on me this week.  So today, just to give you a little window into Life with Meeeee (so you can join the Facebook group “A Million Strong to Let Simcha’s Husband Out of Purgatory Sooner”), I present:

It would be easy to pick seven drinks I like:  lime rickey, cheap beer, slightly more expensive beer with a lime in it, white russian, whiskey sour, gin and tonic, and another gin and tonic.  But who cares?  What would be interesting would be a list of seven things that are likely to happen if I have more than two margaritas, but my spiritual director and my probation officer both advised me against dwelling on that kind of thing.

7 Rules of Etiquette for the Adoration Chapel

Ehhh, this is just too sticky, especially since I haven’t been in over a year.   Other than the time that wall-eyed crazy lady squatted herself down in front of the altar and started to rummage through the basket of prayer intentions, alternately shrugging, raising her eyebrows, and giggling as she read, and I told her to cut it out — I’m really out of my depth in this one.  I think I could come up with seven things, but no one comes out looking good.  Better leave it alone.

This one hits the sweet spot for me, because I love making fun of things, but I wouldn’t feel bad, because it was my own past self that I would be mocking.  But then I’m guaranteed to offend some readers who actually did go with “Beryl Cornelia Moselle,” and they have the patron saint to back it up.  I try and minimize the in-huff-leaving that goes on around here, so this one is out.

7 Bugs That Temporarily Ruined My Life

I can, and have, gone on at length about how I’m the onnnnnnnly person in the world who’s had to do a bunch of extra laundry to get rid of fleas or lice or whatever.  And then there was that one time we got a mysterious moth infestation, and had to throw out all our food right when we had a $17-a-week grocery budget for six people.   There were so many moths in the living room, it looked like the tracking needed to be adjusted.  (For my youthful friends, that’s a VCR reference.  Ask your dad.)  The low point was when I opened up a tiny bottle of cream of tartar, and found it thoroughly infested with larvae.   Really?  Really, moths — you had to eat my effing cream of tartar?

But this one is no good, because many of my readers live in terrifying, tropical lands with enormous, venemous, year-round bugs, the likes of which I never saw even in my worst nightmares.  They will scoff at my little mishap with the scary old lady bug, and tearfully recount how their third and fourth children were both carried off in the flying, carnivorous earwig invasion of Ought-Three, and how insult was added to injury when said children’s funerals were interrupted by  historically unprecedented swarms of acid-squirting butterflies who become enraged by the color black.   So, that’s out.

I Hate My Hair

Can I just say that seven times?

7 Embarrassing Things I Have Called Poison Control About

It turns out that it’s not really a big deal if your stupid kid eats two raw pork chops, nine ounces of glitter, or, sigh, super glue.  It is, on the other hand, kind of a problem if you have to call about these things all in the same day.  At this point, before you get around to listing the other four toxic things your child also ate while you were busy checking your blog stats, I would recommend changing your name.  Perhaps to “Mother of the Year.”

7 Ways to Get Rid of Old Palm Branches

Palm branches are from Palm Sunday, which was back in March.  So why, if you got the palm branches four months ago, would you still be talking about– . . . ohhhh.  Still hanging around, looking holy, neglected, and semi-blasphemous, aren’t they?  And not only are they too brittle now to be woven into a lovely cross, or too scattered to be stored  away for burning into ashes for Ash Wednesday, you haven’t done any of those things with any palm branches from previous years, either, have you?  Whenever you move out of a house, you clean out everything except the palm branches, don’t you?  When your van breaks down and has to be towed to the junk yard, you clear out all the CD’s and melted Jolly Ranchers and leaky pens, but you pretend to forget about all those sun-baked palm branches on the dashboard, don’t you?  When you’re cleaning out under the couch and you find a palm branch on which someone has written “liht saber” in marker, you suddenly get all jesuitical and contrive an elaborate theory about blessed items losing their sacred significance once they no longer full resemble their original form, don’t you?

Maybe I should change this one to “7 Stupid Things You’re Going To Hell For.”

Well, have a nice weekend, everyone.  I intend to do at least seven things this weekend, and the unifying theme will be gin.