Never mind the talk about sex, gin, or condoms –  I really ruffled some feathers when I allowed my violent distaste for “The Little Drummer Boy” to spill over into the public realm.  Well, I stand by my words.  It’s just a dumb, dumb song, and I don’t like it.  Harumph all you want.

Okay, that was kind of a stretch.  My point is that, despite my entirely justifiable disdain, I can understand why you would like “The Little Drummer Boy.”  Not because there’s anything good about it (there’s not), or because there’s anything wrong with you (there is), but because personal taste is a strange and embarrassing phenomenon.  As my old college professor used to say, De gustibus non figureoutum est.

So, just to let you know that even a sneering elitist like myself has some chinks in my armor (although my heart of stone remains intact), I present:

1.  Footprints in the sand.  Did you ever look back on your life and see the part that was all soggy?  That was me, weeping heartfelt tears over this unforgivable bit of religious schlock.  It doesn’t even actually make sense.  When you felt the worst, that was when God was carrying you?  Does He do that?  In my experience, it’s more like He says, “Go ahead and have a tantrum — see if I care!”   And the He stands back with his arms folded and watches me make a fool of myself, until I get so worked up that I fall down and hit my head on the coffee table.  Then He picks me up, checks my pupils to make sure I don’t have a concussion, and maybe puts on Shaun the Sheep for a while until I calm down.

Don’t ask me what the sand would look like at this point.

But yeah, “Footprints in the sand” kind of gets me.  Whatever.

It’s bad enough that it’s Billy Joel, but why “Leningrad?”  I hang my head in shame.

Remember that movie Se7en where the guy makes the fat guy eat all those SpaghettiOs?  Hated the movie, but I would love to be that fat guy.  Except for when he gets killed.

4.  Plastic leaves.  We had a Greek myths birthday party in September, and I liked how the dining room looked with strings of plastic ivy tacked onto the wallpaper, so I left them up.  They’re from Dollar Tree, and now my house looks like Dollar Tree.  It’s my house, and that’s how I like it.

5.  Gold or silver spray paint.  IT MAKES EVERYTHING LOOK FANCIER, and you can’t tell me otherwise.  So if you get something like this from me for Christmas 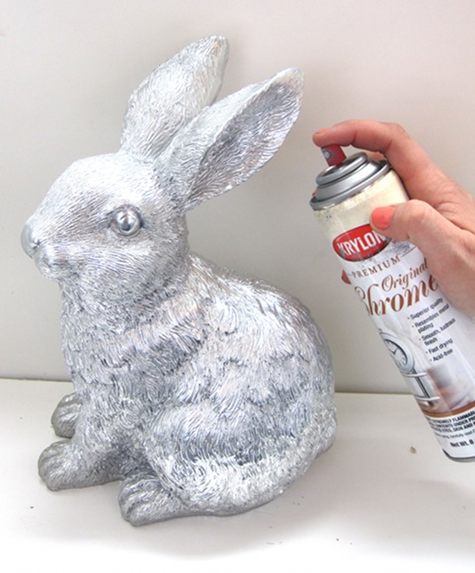 it’s not ironic hipster kitsch.  I just thought it was purty.  Don’t you like pretty things?  What are you, some kind of monster?

Not because of his puppy dog eyes or his upsetting hair, the shredded wheat-like likes of which have not been seen since Gene Wilder in his heyday

– but because of a kind of a funny story.  You see, about ten years into my marriage, my husband rented a movie with Nicholas Cage in it.  I forget what it was, but it sure stunk, as Nicholas Cage movies are wont to do (yes, Bad Lieutenant was mesmerizing.  The Rock was fun.Raising Arizona was amusing, though overrated — but let’s face it, he’s only still around for the same reason as you keep that horrible old tippy coffee table:  because it more or less does the job, and you just don’t have the time right now to go out and get a replacement.  Nicholas Cage:  go ahead and put a wet glass on him.)

Oh, I think the movie wasGhost Rider!  Anyway, we just couldn’t watch it.  And we are people who watched Zardoz all the way through.  We watchedThunderballall the way through.  We watched Yentl, for pete’s sake.  Anyway, it developed that my husband had chosen Ghost Rider because he thought I had some particular affection for Nicholas Cage (which I don’t); and I watched it because I thought he wanted to watch it (which he didn’t).  Very Gift of the Magi, isn’t it?

And then head over to Conversion Diary, where Jen Fulwiler is hosting 7 Quick Takes.  I can almost guarantee you that nobody else’s list will force you to think about Nicholas Cage’s hair.  Although Advent is a penitential season.