7 video games, reviewed by my kids

Hey, who wants to talk about SOMETHING ELSE?

How about vidya games? My kids play games on the Wii, PS2, and occasionally the iPad and PC. We have tons of the Lego Wii games, and they were all the rage at our house for a few years. These are cute, clever, and not too noisy or violent (people just turn back into separate pieces when they get killed). Have’t found a bad one yet.

Here are some of my kids’ other current favorite games. I asked them to give a quick description, plus their favorite and least favorite aspects of the game. Then I added my take, as someone who doesn’t especially like video games, who worries about bad influences on the kids, but who isn’t especially restrictive. We don’t have any particular interest in very violent, scary, or gross games like Resident Evil or Call of Duty. Bracketed comments are mine. 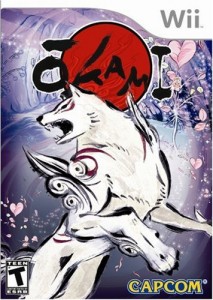 17-year-old girl says:
It’s a Zelda-type action adventure, but everything looks like a Japanese sumi-e painting. You are Amaterasu, the sun goddess, incarnated as a white wolf, and you use celestial brush techniques to paint symbols. You draw symbols in the air to manipulate the world around you — like, you draw a swirly thing to summon a gust of wind. You can fill in gaps in bridges, trail fire from a torch to a pile of brushwood, stuff like that. The goal is to save Japan from evil spirits, which, you know. [I don’t actually know.]

Best part: The best part is that it’s a serious, hard-core adventure game that also rewards you for feeding animals and caring for plants. You collect praise points for helping to restore nature, or helping people, or just being nice, like feeding a kitten. That’s not the main point of the game, but I like that it’s this elaborate adventure, and you get points for being nice to kitties.

Worst part: I hate the sidekick. I want to kill him and I want him to shut up.

My take: Looks weird and gorgeous. I don’t mind having this one in the house at all. 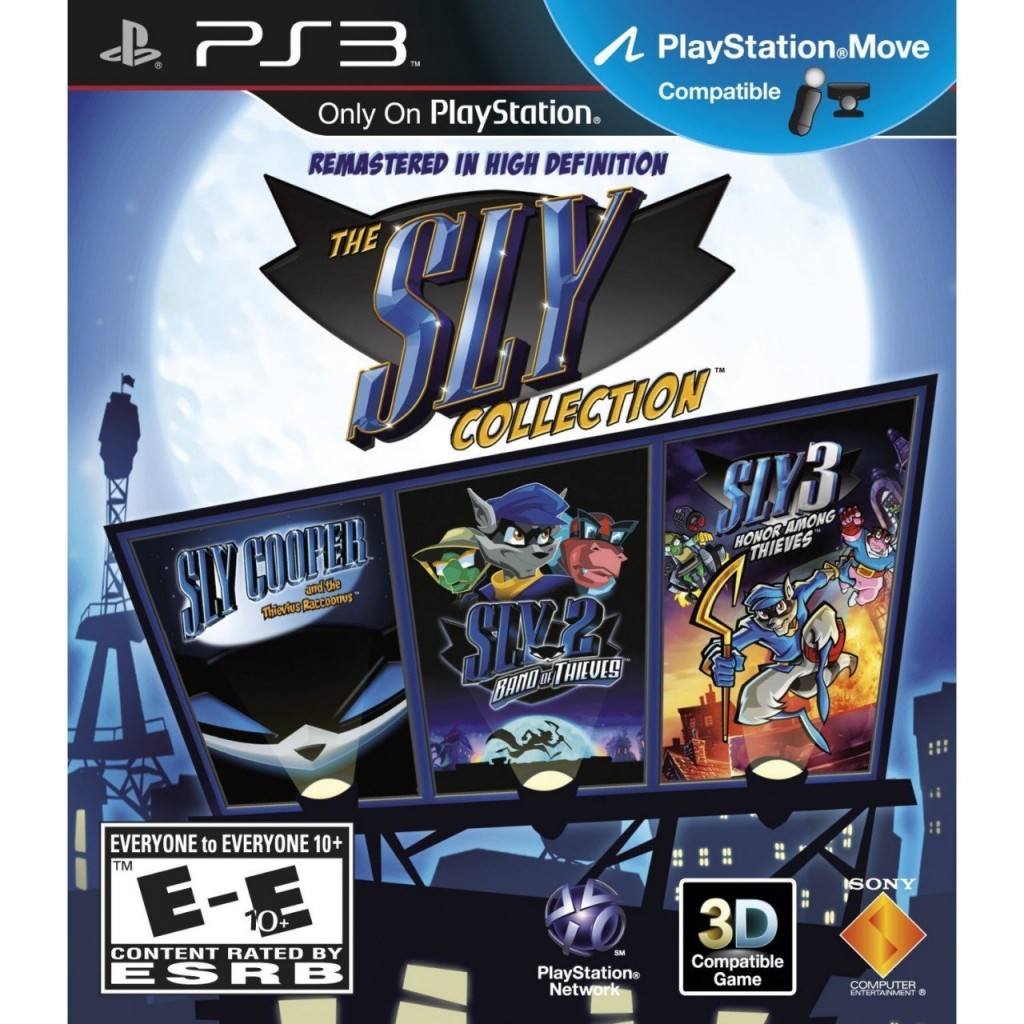 11-year-old boy says:
It’s about a raccoon thief who beats people up and steals stuff, but he’s a good guy. Sort of. In the first one, he’s trying to steal back his family’s guide for how to be a sneaky thief.

Best thing about it: The graphics are great. The characters are very well thought out, and there is good voice acting, except for when they’re supposed to be surprised.

Something I don’t like: it’s kind of annoying that Sly always smiles, even when he falls off a cliff and dies.

My take: The voices are really obnoxious, and the few female characters strike me as unnecessarily sultry.  I would just as soon see these games go away, but both boys (the other one is 13) love these three game to pieces, so there must be something there. The fighting isn’t too graphic. It’s fairly flashy and the sound effects are kind of grating. 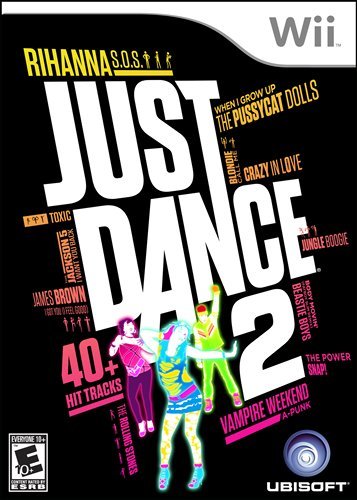 9-year-old girl says:
It’s a game where you pick a song to dance to, and you can earn points by dancing like they are dancing on the screen

Something I don’t like: It doesn’t have Taylor Swift. Some of the dance moves areinapwo-pwo, and we have to skip some of the songs, like “Toxic,” “That’s Not My Name,” and a few others, because they’re sassy and weird and dumb, and sometimes the dances are just inappropriate.

My take: Silly, active fun, except for that one kid who discovered that you can get a perfect score while sitting in a chair and moving your wrist around. Great for an ice breaker at parties, because it gets you moving but everyone is looking at the screen, not at you. Most of the songs are just goofy; a few are too sexy (lyrics and dance moves), so we just skip those. (I actually prefer having the kids get used to the idea that you have to pick and choose and say “no” to some things and “yes” to others, rather than just flat-out forbidding anything that might be, well, inapwopwo, because eventually they’re going to have to tell themselves how to spend their time.)

4. The Legend of Zelda: The Wind Waker (link is for the WiiU version) 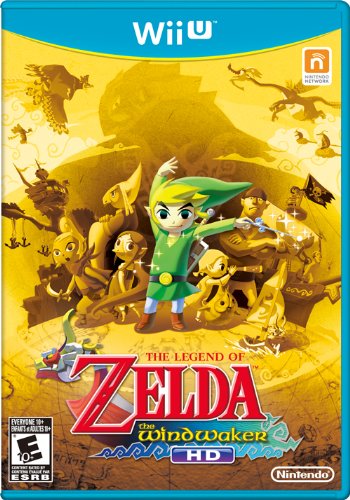 15-year-old girl says:
It’s made for Gamecube, so if you’re using the Wii, you have to use a Gamecube controller instead of a Wii remote. You also need a memory stick for the Wii. There is also an HD version for the Wii U.

It’s an adventure game and a puzzle game, and you have to defeat puzzles and dungeons and bosses, to get different items.  The point of the game is to defeat Gannandorf, the evil bad guy, and save Hyrule and your sister, and make your grandma proud of you.

Best part: It’s an exciting game, but the graphics are absolutely adorable, and the characters are all really funny. I like the Snot Kid, and the way all the characters look.

Something I don’t like: It’s set in a sea, and it takes a while to get from island to island, and you get lost really easily.

My take: I honestly don’t get what the big deal is about all this Zelda stuff, but it doesn’t bother me. A few of the videos are quite pretty. The music isn’t too loud or annoying, and it’s not one of those awful frenetic games. Just a lot of running and hopping, as far as I can see. 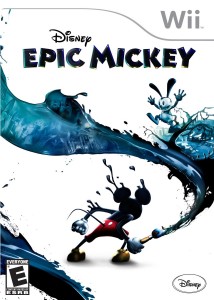 15-year-old girl says:
It’s a sort of dark twist on forgotten old Disney cartoons, but in a cool way –  not a stupid emo hipster kind of thing. [You know. Stupid emo hipster.] You play as Mickey, and get sucked into a world called “Wasteland,” where all forgotten cartoon characters live, and you have to defeat the Mad Doctor and the Blot Creature. You have the power of ink and thinner so you can paint and erase things to your advantage.

Best part: It’s kind of dark and scary at times. It’s got this great morality thing, and sometimes you have a choice of helping a gremlin or getting money, and if you help, you get even more money, or a reward, and you also get the gremlin’s reward later in the game, so it’s got that going for it. It’s not a serious gamer game, but it’s still fun.

Don’t like: It encourages you to use paint more than thinner when defeating bosses, but it’s really difficult. It’s just frustrating.

My take: She’s not kidding about dark twist! Some parts of this game scare the three-year-old. I hear a lot of frustration when they are playing this game, so it’s best for kids who are persistent. Graphics are super detailed and imaginative and have a lot of depth, and it’s fun for the kids to spot obscure cartoon characters.

6. Indiana Jones and the Emperor’s Tomb 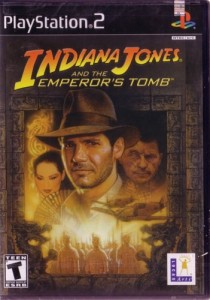 14-year-old girl says:
It’s an action adventure game in the style of the Tomb Raider series, but it’s Indiana Jones. The goal is to get an artifact from the tomb of an emperor, but it’s really convoluted. (We have the PS2 and Windows versions. Apparently this game is “backwards compatible, which means that if you have a PS3 or 4, you can play this PS2 on it.)

What I like: Nice detailed graphics, and the combat is a lot of fun except for when you blow yourself right after Indy says, “Hope I don’t blow myself up.” It has good voice overs. You have to solve puzzles and beat up Nazis.

Don’t like: This is pretty much the only game I’ve played besides all the Lego games. I would make a setting for people who have never played video games before so it’s for them. [There is an easy mode. She may not be aware of this.]

My take: Meh, I’m not crazy about this one, but they’ve been playing it for years now, and no one has turned into a felon yet. My husband likes it.There is so, so much punching, but it’s not bloody or anything, and it seems like it takes a long time to beat all the levels, so that’s a plus. We have picked up a lot of family catch phrases from this game. The voice really does sound like Harrison Ford, and I get to wow the kids by putting my high school German to use (“The American! Kill him!”).

7. The Legend of Zelda: Twilight Princess 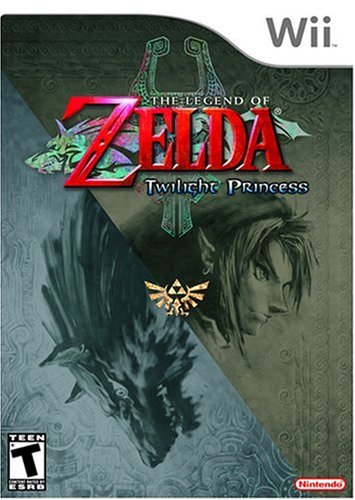 17-year-old girl says:
It’s my all time favorite game. It’s my first ever Zelda game, and you always think the first Zelda game you play is the best one. But objectively, I firmly believe it is the best one in the series. The main plot is that you’re trying to rescue Hyrule from this evil, alternate dimension that is trying to turn everyone into ghosts. It’s a very Japanese game.

Best part: It creates such an elaborate world, you can really get lost with everything you can interact with. It has a great plot and great characters. There’s one scene where one of the characters is dying and you have to bring her to the castle, and it’s the most concerned I’ve ever felt about a character. You get really emotionally involved. Also, it’s just gorgeous and the game play is crazy. It really feels like you’re doing these things. It makes me feel cool. Link does things I could never do. He has all these crazy abilities. That sounds lame, but that’s what they’re trying to do: get you immersed in rhe game.

Don’t like: Uh, I thought I mentioned that this has no flaws whatsoever? Probably the best cel shaded game I’ve ever seen, kind of crazy gorgeous, and so creepy sometimes. It sets you up, introduces you to this world to make you feel secure, and then changes the world suddenly. It really throws you off your balance. It has this innocent fairy tale vibe, and then really strange, creepy things happen.It has some really dark elements to it. The creepiest thing is when it kind of changes the rules on you, and shows you things that don’t belong. Unsettling in the best way.

My take: Take it easy, weirdo.