About 50 easy things to do with pork chops!

Here’s the promised pork chop post from Friday’s “What’s for Supper?” post. Some nice ideas here, collected after I asked Facebook what to do when I had a bunch of thin pork chops and no exotic ingredients.  Sorry about the terrible formatting. Today, I let the computer win. 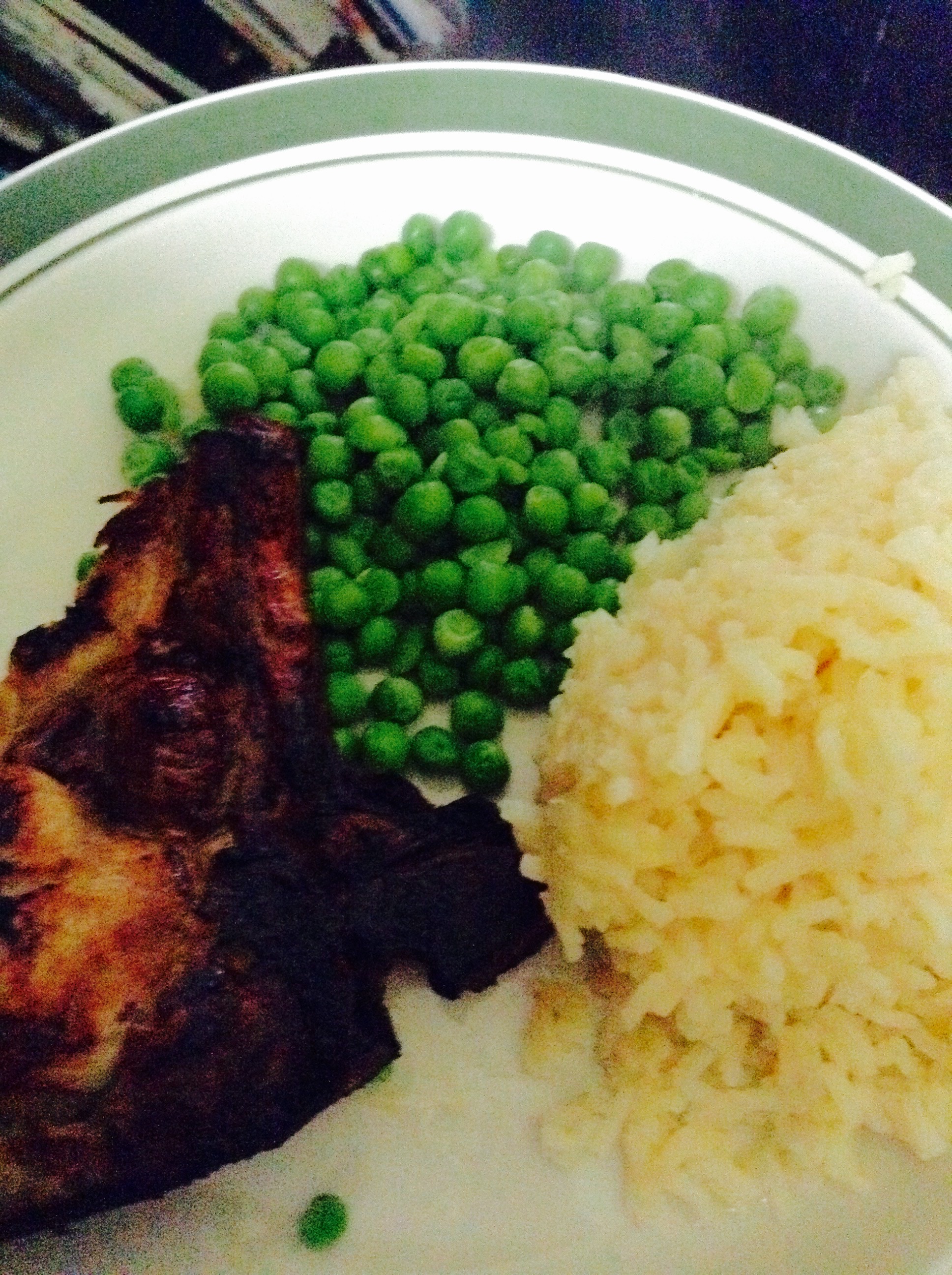 The secret ingredient is frickin.

ABOUT 50 EASY THINGS TO DO WITH PORK CHOPS

Salt, pepper, dip in flour, shake off the excess, and cook in a frying pan.
Flour keeps them moist, and gives them color. Add some butter to the oil while they’re cookingOne of my boys’ favorite meals is when I bread & fry pork chops. I serve it with rice & a sweet/sour sauce of equal parts brown sugar, soy sauce, & ketchup. Kind of Asian & really yummy (though the breading & frying takes a while).1/3 oj, 1/3 soy, 1/3 italian dressing. pour over chops, let them soak. When you’re ready in the evening, Broil chops. Serve with sauteed apples and a salad. Pork chops with delicious pineapple marmlade is insanely good. Orange works, too. Anything citrus, really, perks it up beautifully.

My Grams always made chops with sauteed onion, cream of _____ soup (usually mushroom, but whatever you have on hand works–unless it’s chicken…a little too Frankenstein for me. wink emoticon ). She’d cut up potatoes and add them once the chops were browned, and then pour in the soup, and slow-cook on the stove top for a while–long enough for the potatoes to be done anyway. DELICIOUS.Some Italian dressing and lemon juice. Crockpot. Make some rice. Microwave frozen vegetabkes.
Balsamic vinegar, honey and shallots – just sear them, remove, throw bv, shallots and honey in and let bubble for a few minutes. throw chops back in and cook a little more. Done. There are kinder, gentler ways of doing this recipe but who has the time?Balsamic dressing mixed with Dijon mustard
Smother those suckers

Season as you like, brown both sides in a big skillet, add a couple of sliced onions and let them saute a bit, add lots of beef broth, simmer for 20-30 minutes, add a little cornstarch/water and boil to thicken the juice a little. serve with rice. Family favorite here smile emoticon (the onions are the key to the flavor)
Soy sauce, garlic and ginger (fresh, if you can!)Sliced apples, cinnamon, alcohol of choice (beer, wine, etc), butter, sage or rosemary. Serve with egg noodles or rice.
Dip in egg, bread crumbs and pan fry on each side just to brown, cook spaghetti, put pork chops on top of noodles and pour red sauce over top, bake 350

serve cereal.Cereal, the other other white meat.

Dice an onion and slice a bell pepper (not a green one) if you want to use one up. Slice up a few stalks of celery (1/2 cup or so) Layer chops, onion/pepper/celery, and one can of diced tomatoes in a large skillet and sprinkle dried parsley, salt, pepper and a few dashes of gar
lic (you can add a clove of garlic with the onion if you have fresh, instead) over top. Simmer for one hour on stovetop. (If you want to double, you can do it in the oven in a 9×12 at 350 for an hour, but it’s better on the stove…I’ve done two skillets before!) Serve with rice. We call it “Pork and Veggies.”

brine them for an hour in salt water in the fridge, then just salt and pepper and pan fry or brown them in the pan and finish in the oven.

You have soda (Coke) in the house? You can cook it down to a great glaze and then fry the chops in it.

Sweet and Sour Pork III Recipe You can sub out the pinapple for other fruit. We did mango, but I bet almost anything would work in a pinch.

Fry up some onions, put the chops in a baking pan, mix the onions with some cream of mushroom soup and 1/4 cup of milk, pour it over the chops, throw it in the oven covered at 350 for an hour. serve with rice.

I was going to make slow cooker ranch porkchops. Google the recipe. You know, if this baby ever stops screaming.

Do you keep minced garlic on hand and onions? Cook together with a bit of salt and pepper, some oregano and Rosemary. Then remove and cook two cups of basmati rice (you want basmati because it cooks pretty fast). It will retain the flavor of the chops and is delish.

This is one of my husb’s favorites: pound them even thinner, dip ‘em in raw egg, roll ‘em in bread crumbs, add any seasonings you want (I usually add garlic and onion), and pan-fry them for a couple of minutes and voila! A dinner that everyone will eat. If the kids are willing to wash their hands, they can do the prep and that makes them happy too.

Chopped apples and a little cinnamon bake them together.

Baked with cream of mushroom soup spread over them, serve with rice.
Soak em in honey and whiskey and grill them.

My mom always just cooked them in some butter and put garlic salt on them, served with veggies and mac & cheese. It was cheap and easy.

I do something like this with thin boneless skinless chicken breasts. Delicious.

Salt and pepper, a can of cream of mushroom soup, and some sliced mushrooms and onions… it’s easy — takes about a half hour — and it makes a gravy too!

2 cloves garlic chopped, 1/2 tsp ground cinnamon, 1/2 cup soy sauce…marinade for as long as possible (the longer, the better it tastes), and fry up in oil about 4 minutes on each side.I am a terrible cook and my picky kids will actually eat this.

Pork Chops with Apples and Onions

Slice some potatoes up as thin as you can, mix with a can or two of cream of mushroom soup, add some garlic and paprika, stick the chops down in the soup on top of the potatoes and cook for 1 hr. All you need to add is a salad or whatever veggie you have around.

Fr Leo FOR THE WIN. I’ve used this maranaide for every form of pork, from skewers as recommended, to pork chops that I then cooked in a skillet, to crock pot.

Rub them with olive oil, powdered ginger, rosemary and black pepper, then pan sear them.

Here, all pork chops must be panfried, then pan gravy made from the drippings and butter, flour, and milk… And served with a heaping pile of bread and gravy. It is one of my favorite, if not it all healthy, meals.

Mix jam and a little creole mustard (or dijon or anything). Lay the chops out on a broiling pan, brush with mixture. Broil on one side (2-5 minutes max), flip, brush again, broil again (2-5 min max). Done!

Brush with oil, coat with a mix of half Italian bread crumbs and half Parmesan cheese, with a bit of garlic powder and pepper. Bake in foil lined pan at 350 for 50 minutes. So good, SO easy.

Pour a dab of Louisana Hot Sauce on each one both sides and spread it out thin and sprinkle sea salt, pepper and garlic powder over that and bbq.

Bake them with 5-spice or just salt and pepper, or marinate with soy sauce and bake. Slice into bite sized bits and set aside. Cook rice or brown rice the usual way. Set aside. Scramble some eggs a bit dry. Set aside. Sautee some bite-sized vegetables in oil and set aside. Mix them together in a pan, sauteeing with a little more oil until warmed together. Fried rice.

ooo thin chops… very easy: brush with BBQ sauce and put them on the grill, about 5min each side. If you prefer a very quick stove top choice, dredge in flour seasoned with salt, pepper, (cayenne pepper if you like it up a notch), rosemary, and saute in olive oil. also 5 min each side. By very thin, I assume you mean less than half an inch.

Crush juniper berries, salt and black pepper together, and rub into the surface. Bonus: juniper is gin flavour!

Per 4 pork chops: 1c of chicken broth, 1t of orange zest, 1t of ginger, 1t of garlic all simmered. After simmering for a minute, toss in chops and a sprinkle of red pepper flakes and cook until soft

I use a pyrex dish and add sauerkraut, including liquid. real easy and good.