Artist of the Month: Matt Clark’s Amphibians, Minotaurs, and other Christian Art

Editors’ Note: This article is part of the Patheos Public Square on Religion and Visual Art. Read other perspectives here. **** 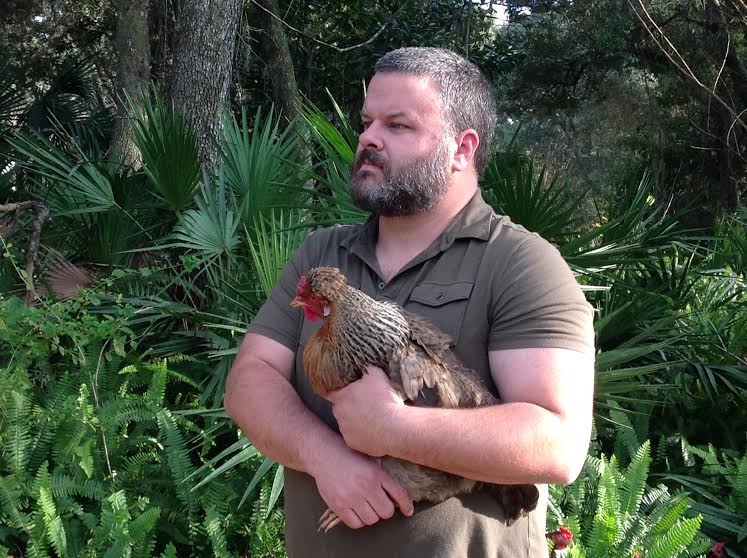 Matt Clark, 39, is a teacher, print maker, and freelance illustrator who lives in Florida with his wife and growing family (they are expecting baby #7 in a matter of weeks). This interview is one of a series with religious artists. My questions are in bold.

You are Anglican, and make secular and overtly religious art; but on your website, you say, “I don’t believe art has to have biblical subject matter to be Christian.” Can you explain how your secular work is Christian? 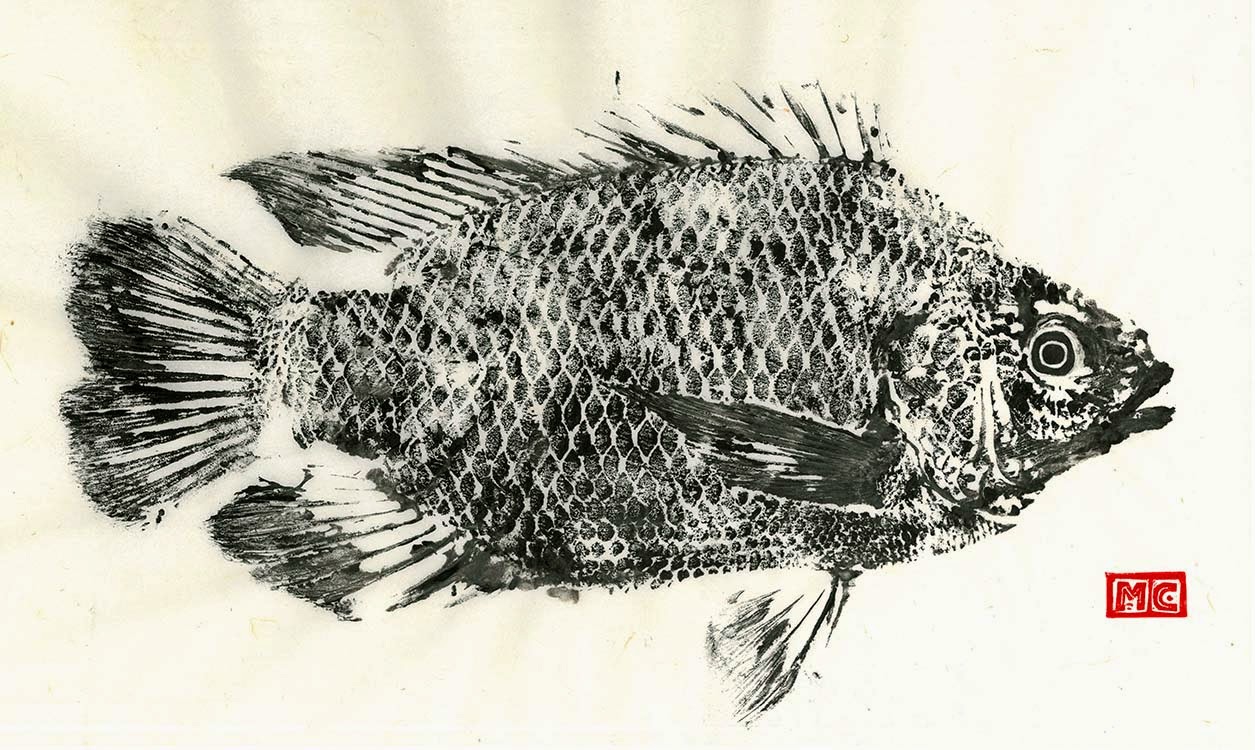 I figure if God made all these things, I don’t know that we’re to draw a distinction between natural and supernatural. 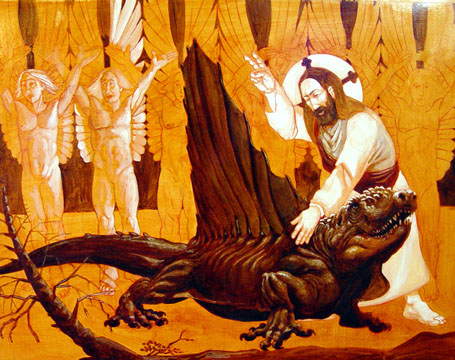 El Greco was always showing heaven intruding on earth, with no clear distinction between where one stops and another begins. The scraps I feed my chickens, the bugs they dig up, they transform that into an egg. That’s magic! 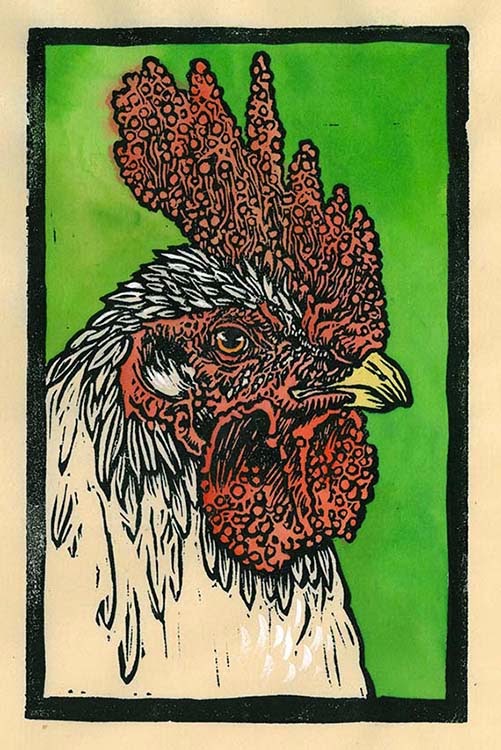 I don’t want to sound like a pantheist — you can’t worship just as well on the golf course as in church. But I don’t like to draw sharp lines between religious and other art. Who I am is a Christian, and everything I do will be that Christianity.

It seems like your “overtly Christian” works are about making religious figures and scenes relatable and human. 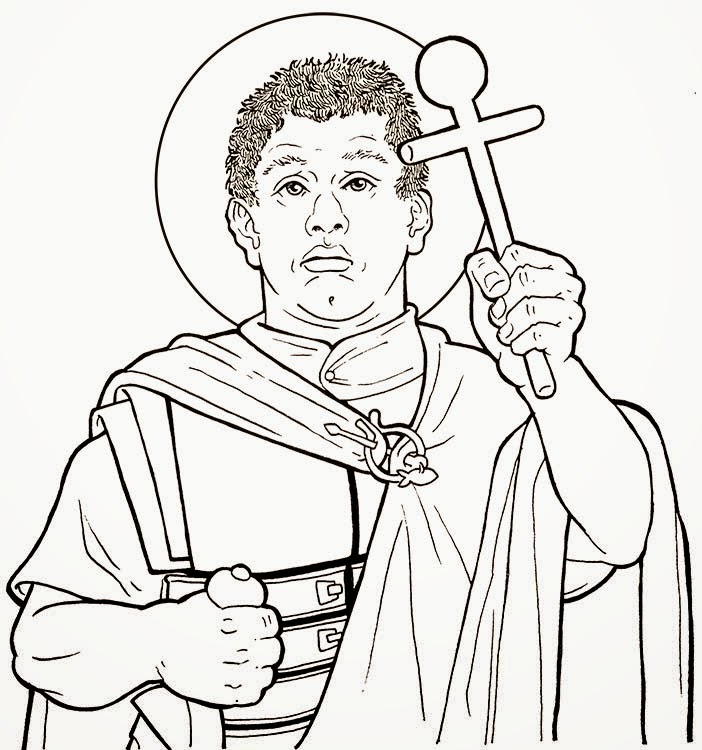 Do you see that as a form of evangelization?

I do. C.S. Lewis talks about how we don’t need more Christian apologists, but we need more books on mechanics, physics, and medicine, written by Christians, so people realize, “Oh, Christians are doing this.” 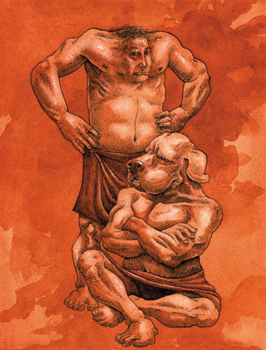 Growing up Baptist, we did more than our share of knocking on doors. It’s probably the worst thing in the world. It’s much better to live out my Christianity, and have that life move into other people’s lives. This is how we witness. I don’t ever want to make propaganda artwork. I’m perfectly willing to talk to people, but I get really itchy around propaganda. 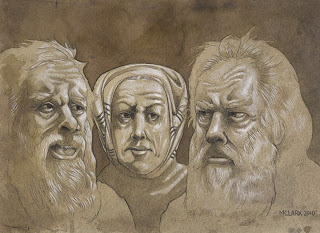 Since you teach at a Christian school, do you ever get any pushback for portraying or studying nudes in art? 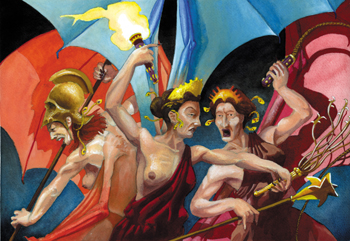 Well [laughs], the administration frowns on using nude models in elementary school. But talks about nudity with my children come early, as we go to the beach. It is Florida.

In art school, we had lots of nude models. We were doing a three-hour pose, and I remember idly wondering if the model had any tattoos. Then I realized that I would know, because she’s naked in front of me.

Some artists abuse their work and make nudes pornographic, but I believe there’s such a thing as chaste nudity. In paintings of the Madonna and Child, Jesus is almost always naked, showing His genitals on purpose, really in the flesh. 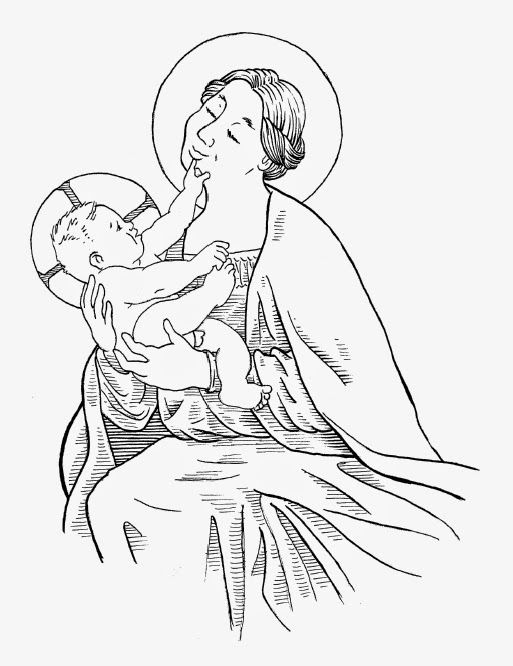 It’s very affirming of the Incarnation to show nudity in that way. Nudity doesn’t equal evil.

Rembrandt takes this tendency [to pornographize the nude] and he uses it. Bath Sheba is a full length nude, sitting down, right after her bath. Her maid is drying her feet. It’s very, very lovely. You see she has a note, and there’s a look of sadness of her face, and you realize that’s her summons to the palace. 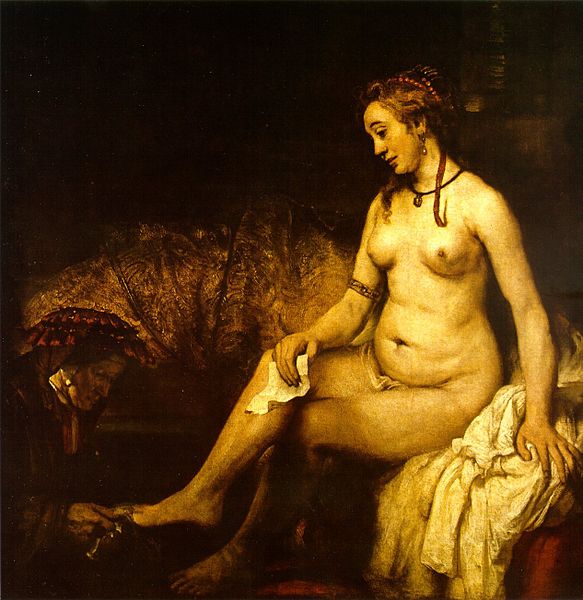 She’s beautiful, she’s ritually clean, and now she’s going to be defiled in a profound way. You’re in the place of David. Rembrandt is saying, “Look at this beautiful nude — but look at is as David looked at it.” He draws attention to your own tendencies to dehumanize people. 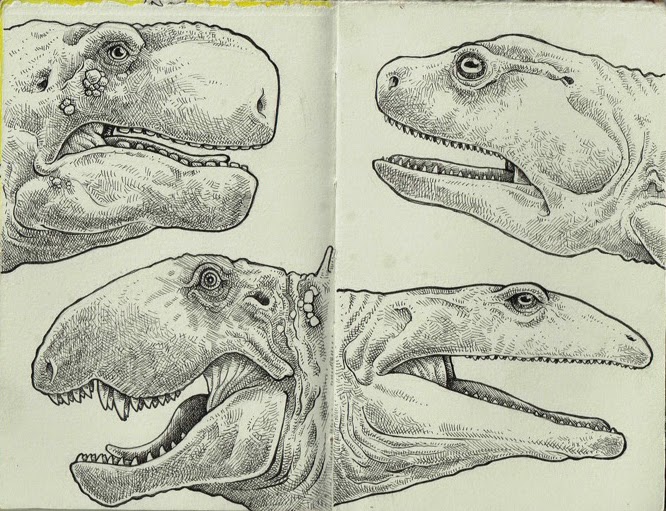 It seems like you’re constantly asking, “What is man, anyway?”

I do always ask that question. That’s why I love science fiction so much. “What’s human, what’s not human?” is the question they always ask. 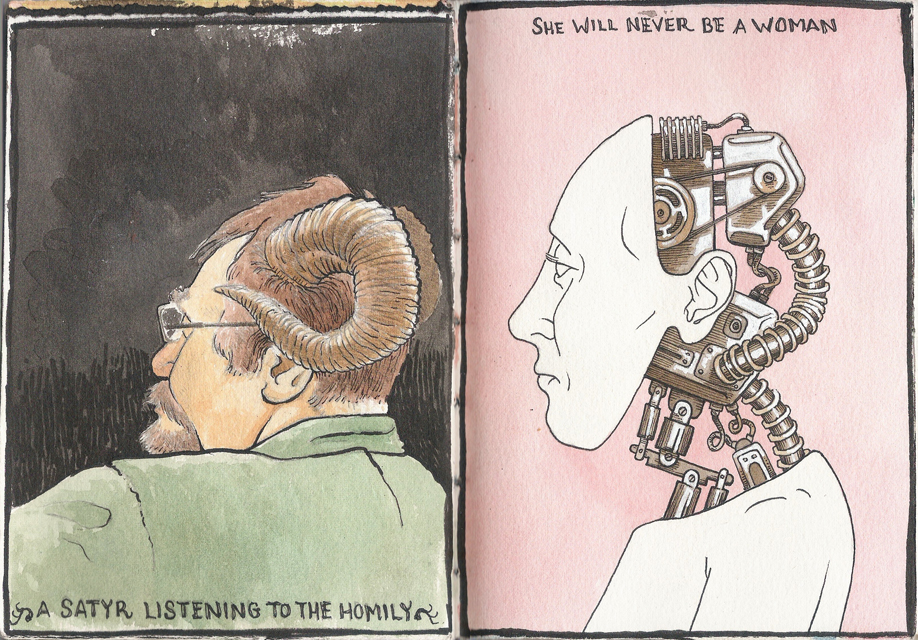 The robot cyborg always ends up being more human than the protagonist. So what makes us people? 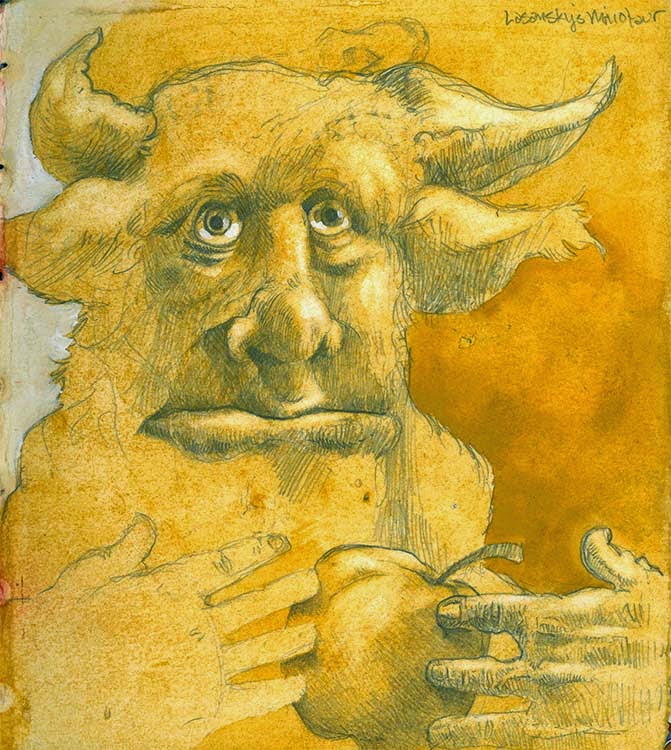 The first time I questioned this was in the Louisville Zoo. There was this gorilla, and I noticed his ear looked just like mine. I made the leap to looking at his face, and realized he was looking at me. I said to my wife, “He looks really unhappy” — and then he threw his fist at the glass and ran away. 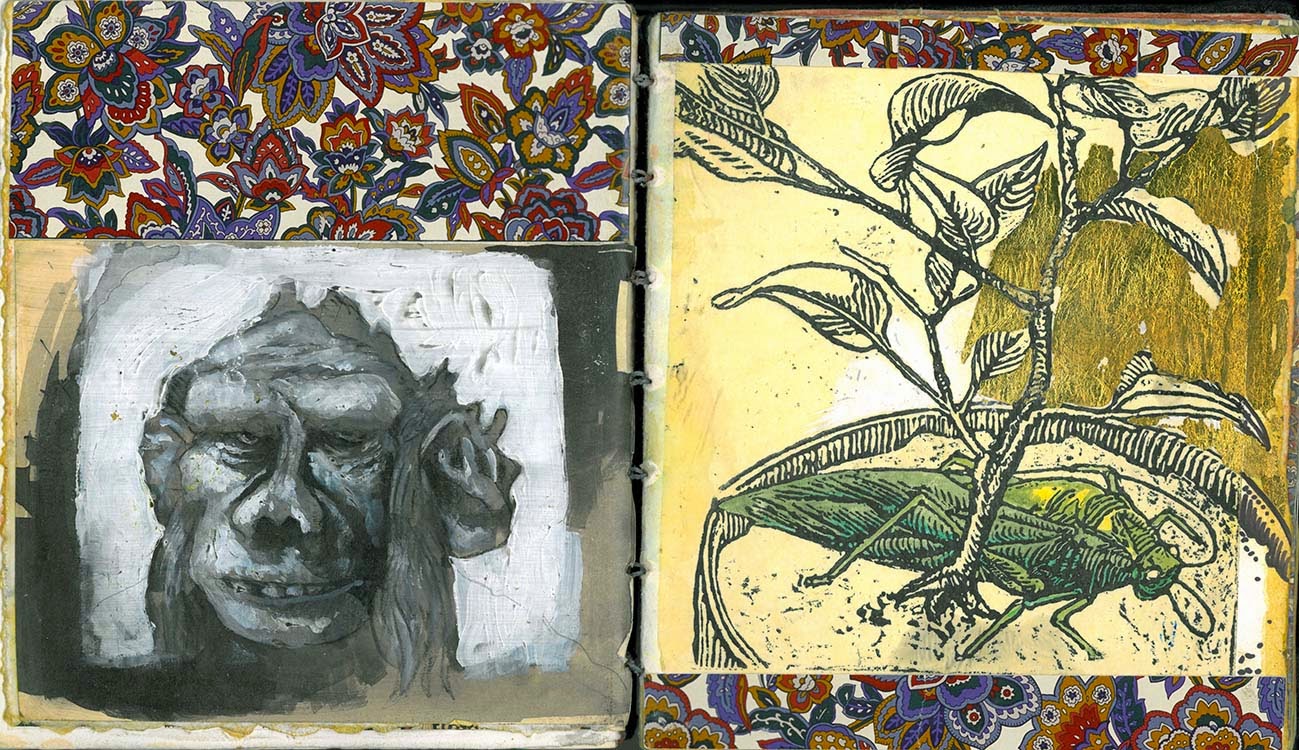 We’re brought up to believe that animals are machines, only good as resources to be exploited, but I think that’s a terrible thing. I have some kind of relationship with the animal as a creature. That’s what it says in The Screwtape Letters: We are amphibious, animals, but spiritual as well. A creature, but immortal. 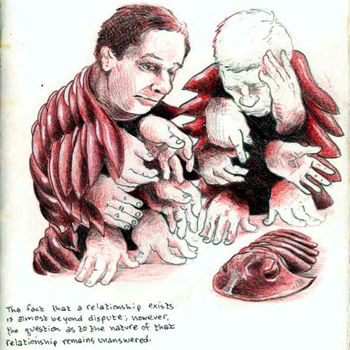 I suppose it’s a way for me to work out the Incarnation: What He’s done is good, very good; in fact, so good that He’s going to become a little baby to a scared little girl in a Roman backwater. I haven’t worked it all out in my mind, but somehow all the dirt and plants and animals and rocks and sand and water . . . 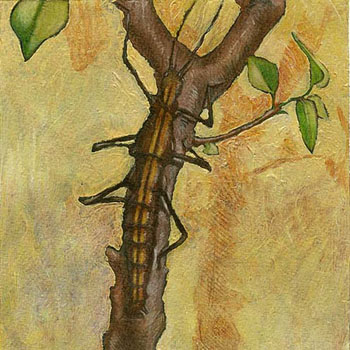 He liked these things so much, He wanted to be not just overseeing it, but involved in it. 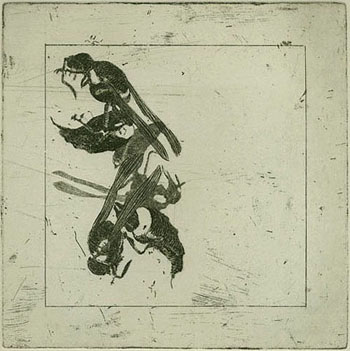 And it seems like you are inviting the viewer to do just that: not just view, but get involved. You also write a lot about your work, which not all artists do.

I always appreciate when people explain things, or obscure the proper things. If you write clearly, you can think clearly. I want to think more clearly. 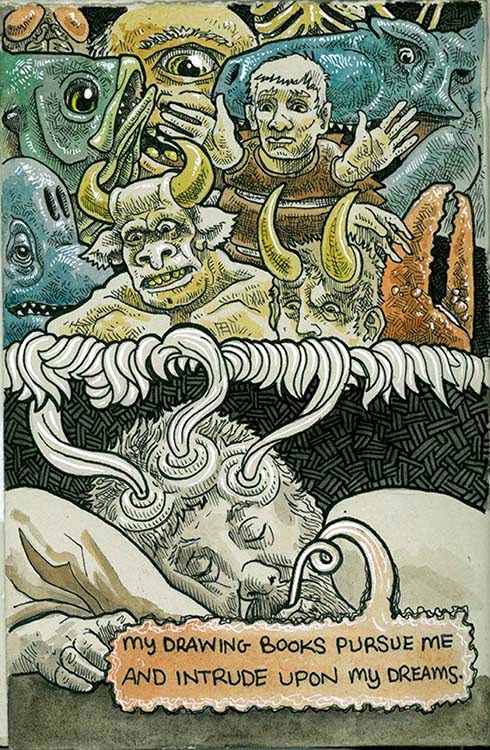 Have you ever started thinking more clearly through the process of creating art?

Back in college, I did this big piece on Romans for my senior thesis. It was 36 or 40 feet wide. I worked 40-50 hours a week for a couple of months on this one drawing. All I did was think and look and I started to see the whole book as an argument that St. Paul was making. This was at the University of Florida. There was no bashing of Christianity, but no one cared. They just said, “This is a neat drawing. Wow. It’s really big. I like the way you did this . . . Oh, Brian, I see you’re wearing your tutu in this one!” 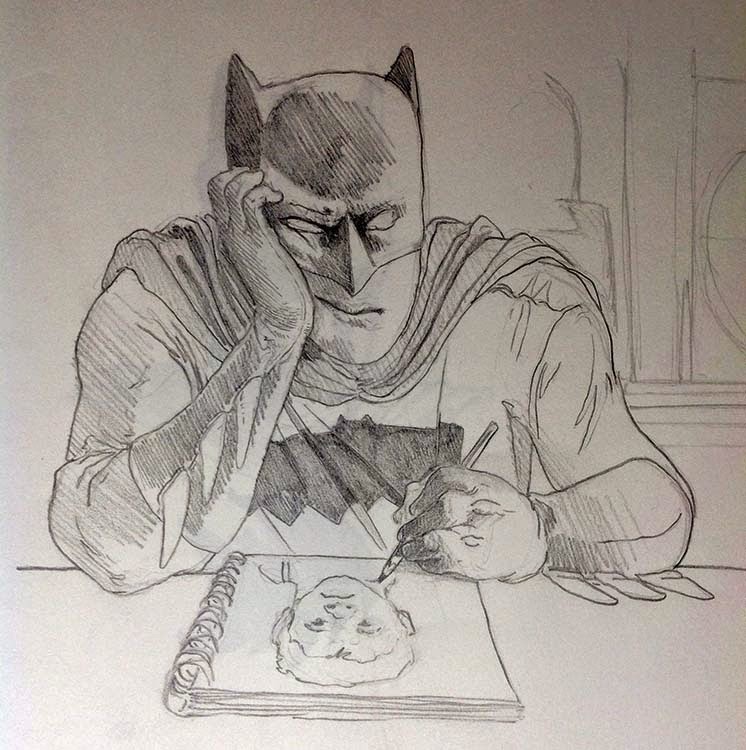 I asked myself, “Why am I doing this? Am I making a giant prayer, telling God something He already knows? Who am I making this for? Did I think it would be like a big [religious] tract? 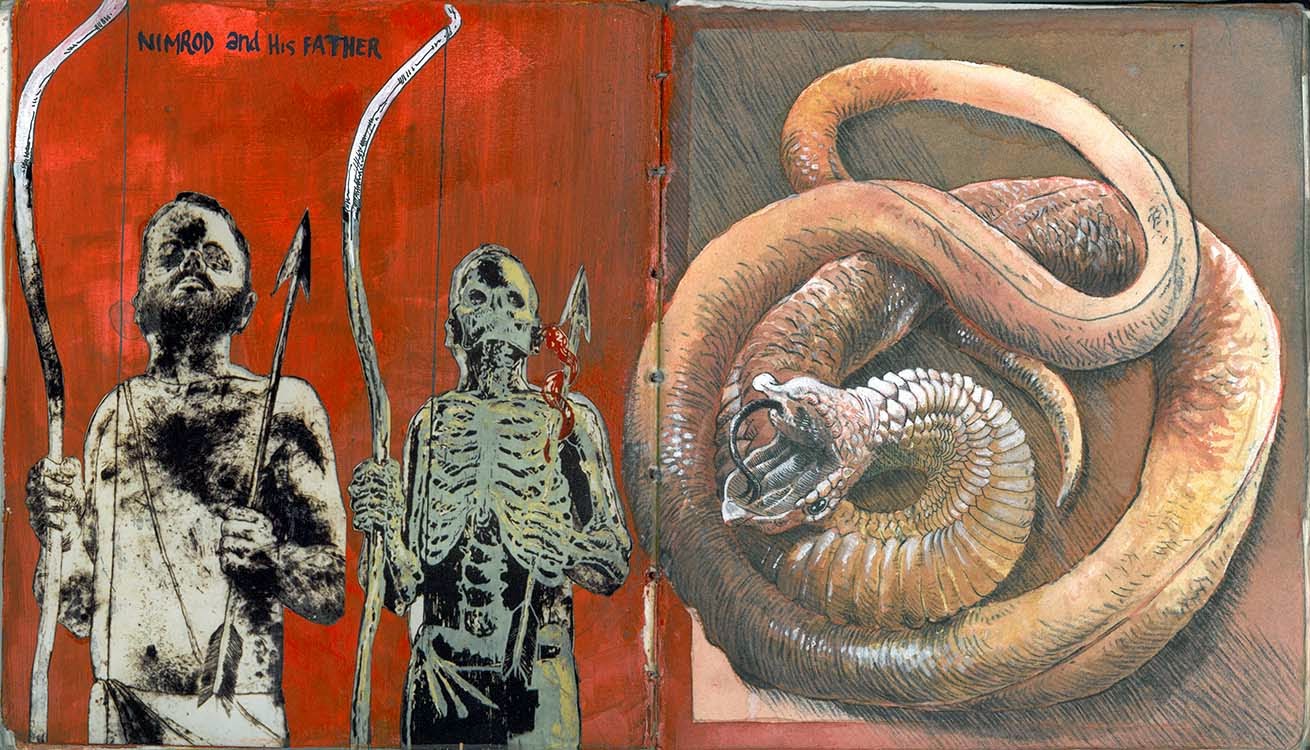 I put myself in the drawing. I realized that the audience this drawing was for was me. The Bible isn’t something I need to yell out to other people. I’m learning these things for me, as a work of sanctification. Artists aren’t immune from their work. We’re part of the audience. 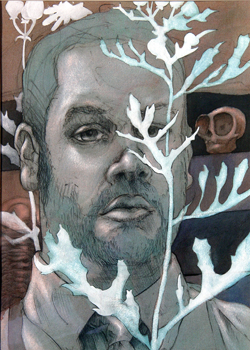