Because I said I would: Nope, the CDF has not ruled Medjugorje non-supernatural 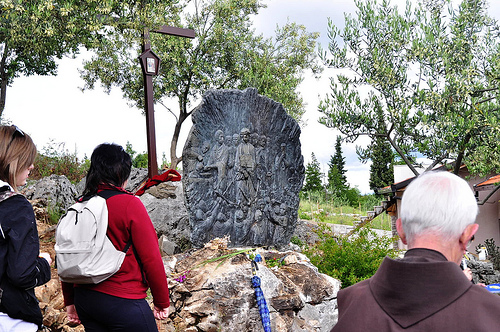 So the Italian media was wrong!  Dun dun dunnnnn. I said I would acknowledge it if yesterday’s report turned out not to be true, so here I is. According to an interview in the Register with Father Ciro Benedettini in the Vatican Press Office

The Vatican said Friday that contrary to reports in Italian media, no decision has been made regarding certain doctrinal and disciplinary aspects of alleged Marian apparitions at Medjugorje.

The CDF is slated review a report made after three years of investigation of the alleged apparitions, but they have not reviewed it or made a statement about it yet. According to the Register:

Vatican Insiderreported Friday that the CDF did hold a feria quarta meeting but that took place on June 17, and the issue of Medjugorje was not discussed.

So, we’re still in a holding pattern. I’m content to wait weeks, months, or years until the CDF and Pope Francis speak definitively. While the alleged apparitions are ongoing (as they have been for over thirty years), the Holy See will not say, “Yes, this is a true apparition” — because what if they gave it the green light, and then Mary suddenly started saying “Everybody wear your underwear on the outside and go kill the Pope”?  That’s-a no good.

But while the alleged apparitions are ongoing, they may certainly say, “There is no supernatural activity here, so you may not behave as if there is.” This is what I expect them to say.

In the meantime, Jimmy Akin assembles some facts, including several comments by Pope Francis indicating that he is skeptical at best about the validity of apparitions in Medjugorje.

And Howard Kainz, back in 2012, wrote a crushing summary of the various bizarre and disconcerting details that have surrounded Medjugorje since the beginning. A thorough and enlightening read.

It couldn’t hurt to say this one more time:

Have there been good fruits from Medjugorje? Absolutely. Absolutely. People have had profound and sincere spiritual experiences, including messages of consolation, miraculous healing, and conversion. If the Pope comes out on his balcony wearing a  “Medjawhoosis stinks!” t-shirt tomorrow, none of that will change. Good fruits are good fruits, and nobody’s trying to take that away (even while pointing out the myriad bad fruits that also have grown).

But good fruits can come from . . . anywhere. The Holy Spirit is ready, willing, able, and ridiculously eager to come to us when we do things like go to confession, pray the rosary, receive communion, go to adoration, and open our hearts sincerely to God. That’s just what the Holy Spirit is like: not picky! My parents used to go to the Community Bible Chapel, where many of the holy people there spoke in tongues and even prophesied, because they loved the Lord and gave their lives to Him. Does this mean it was the one true Church? Nope. Once they realized the fullness of truth was elsewhere, they left, and sheltered themselves in the arms of the Catholic Church and her magisterium.

So, wait and see. And once again: pray for everyone who will be wounded and confused when the Holy See speaks. It’s not something I look forward to with glee; but I do anticipate it the way you anticipate a doctor lancing an infected wound. You know it’s going to hurt, but it has to happen eventually.