But what if we’re not scientists?

When Catholics have a hard time understanding or accepting some point of doctrine, their path is not easy, but it is clear. John XXIII reportedly told a man,  “Accept the teaching you can accept, and pray to accept the ones you can’t.” We do this because we understand thatthe magsterium, the teaching authority of the Church, speaks for Christ and deserves our obedience. We don’t always like it, and we don’t always manage it, but our job is at least to try to accept the doctrine we don’t like or can’t understand, and to work toward understanding why the Church teaches what it does. Augustine, the original Mr. I Did My Homework, said “Seek not to understand that you may believe, but believe that you may understand.”

So that’s faith. Science is different. There is no magisterium in science; and we are never required to work as hard as we can to make ourselves accept an idea that seems wrong or false. If something sounds wrong, it is okay to look for another explanation from another source. It is more than okay: it’s the right thing to do.

But what if we are not scientists? What if we are not capable, because of time, temperament, training, or plain old brain power, to understand certain specialized information? We can’t all be experts in everything. Sooner or later, even intelligent people are going to come across something we don’t understand.

It’s not fashionable to admit this, but it’s indisputable. We all have our limits. We all get in above our heads at some point. This is especially true when we’re talking about medicine, because medicine stands at an uncomfortable crossroads: it involves extremely complicated matters, making it hard to grasp, and it directly affects us and the people we love, making it very personal. What to do?

Again, it’s not fashionable to admit, but all sensible people do the same thing:we decide who we’re going to trust. We pick someone who seems to understand the issue better than we do, and we decide to believe what that person says.

A good many people don’t realize that this is what they’re doing. They say they’ve “done their homework” or “researched the matter thoroughly.” Really what they mean is that they’ve found a bunch of books and articles that are written at a level they understand, and they have talked to a bunch of people who seem trustworthy, and they have decided that they are going to trust that the people who seem to understand the matter better than they do.

There is nothing wrong with this system! In fact, most of us have no choice, because we can’t all be experts in everything. So we decide who we’re going to trust. This is what Debi Vinnedge, executive director of Children of God for Life has done. Vinnedge’s degree is in business administration, and so she has decided that, not being trained in science herself, she will trust someone who is: Dr. Theresa Deisher. And this is what I am doing when I decided to trust the folks at Rational Catholic who have been patiently, systematically plowing through Dr. Deisher’s study and compiling a list of problems they found in the study.*

I am not an expert in science of any kind. What I do, and what I recommend that other people do, is this:  Don’t pretend to understand more than you do. Instead, be smart about consciously, deliberately choosing whom to trust — and be ready to change your mind, if you have reason to stop trusting that person. The person you trust need not be a degreed expert in the field. Some of the best teachers are people who have educated themselves in matters that interest them; who know how to explain things well; and who are good at pointing other people toward more information.

So, how do we go about deciding which experts to trust, and which to be suspicious of? Here are a few of the traps we can fall into:

Mistrusting a knowledgeable person because he expresses his ideas in an unpleasant way.I wish people wouldn’t do this, because it ratchets up emotions and makes me reluctant to share otherwise solid information. But unpleasantness of expression is not, in itself, a reason to disbelieve the facts, as long as the facts are there along with the unpleasantness.

Mistrusting a knowledgeable person simply because he said something that makes you mad or upset or scared.

Trusting a knowledgeable person simply because he said something that makes you feel happy or peaceful or contented.

Trusting a knowledgeable person simply because he has a degree or went to a certain school. Educational credentials tell you something; but in many cases, it’s easy to produce someone who disagrees with your expert but who holds the same degree and who went to the same or an equally prestigious school.

Mistrusting a knowledgeable person because you disagree with him about unrelated things. If he is wrong about lots and lots of things, then beware; but remember that you’re not swearing fealty to a prophet and all that he professes; you’re simply assessing a specific idea. Lots of people are right about some things and wrong about others.

Trusting a knowledgeable person simply because he agrees with you about other things.We see this mistake among secular people when they mistrust scientists who are pro-life, simply because they are pro-life. This is clearly unfair. But Catholics make the exact same mistake when they trust someone simply because he is pro-life. It goes like this: Scientist X opposes his abortion, therefore all of his ideas about everything must be pro-life, therefore you must agree with all of his ideas about everything or elseyouare not truly pro-life.

Trusting a knowledgeable person because it would be uncharitable to question his findings, or because his personal life is difficult at the moment. This is just bizarre, and I’m always amazed to hear this idea being treated as if it means anything. Being mean to people is a sin against charity. Criticizing ideas is why God gave us brains. (This mistake, too, has a corollary in the secular world: people accept experts simply because they are contrary and annoy people.)

Trustinga knowledgeable person because he has published a study in a scientific journal.This is, unfortunately, not the gold standard for research that it ought to be. There are reputable journals anddisreputable journals, and many have low standards for what they will print, but have chosen prestigious-sounding names for themselves.

Trustinga knowledgeable person who says things that you don’t understandat all. Remember, the reason you decided to trust this person is because you believe he understands things better than you. But he should still be able to convey at least some of what he understands to people who are not experts, or he should at least be able to point you toward more accessible explanations. Someone whose writing is entirely opaque to you is someone you have no reason to trust. Technical words and complicated sentences are often a smokescreen for people who are either trying to fool you, or who don’t understand the subject matter themselves, but have picked up some dazzling vocabulary.

Remember, you’re not a complete moron, or else you’d be off refreshing your news feed for more photos of Paris Hilton’s new puppydog, rather than reading a post about scientific research. As a non-moron, you don’t have to head into these things blind. There are some things you can check yourself. Here is a useful chart to use as a starting point, when you hear a new idea and are wondering whether to get behind it or not. 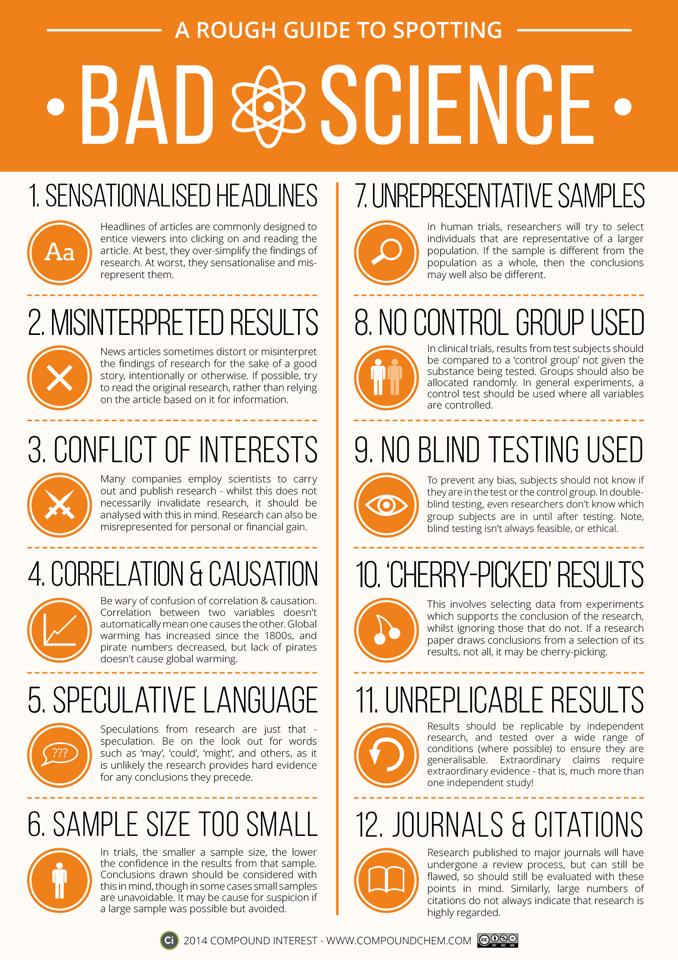 And remember: nobody likes to be challenged, but good science stands up to scrutiny. Questioning someone’s study is not an attack, or an attempt to silence that person. It’s just what all credible scientists should expect, especially if their studies contradict what nearly every other researcher in the field has found.  If you are being scolded for the mere act of challenging an idea, then that in itself is a sign that the science may be bad.

*Part one: The Numberswent up the other day. It is a response to the way Deisher has gathered and analyzed her statistics. Here is a summary:

If you are wondering why Catholics like the authors of this blog are criticizing Dr. Deisher, then you should read Rational Catholic’s post, and stay tuned for parts two and three, where the conclusions she reaches will be analyzed just as closely. There is nothing personal, scurrilous, hateful, or uncharitable in responding in detail to a scientific study. The authors of Rational Catholic believe that parents should not be frightened away, by Deisher’s study or by anybody else, from vaccinating their healthy children.