We just discovered a new family game!  My 12-year-old daughter, who taught it to us, scornfully insists that it’s actually called “Excuses,” and not (sneer) “Excuses, Excuses,” but I think it’s funnier my way, and anyway, who is she?  Does she have a blog?   Oh, well, actually, she does.  But we are good parents, and don’t let anyone look at it.  Ha ha!

Anyway, we’ve been playing this new game in the evening after supper, when it’s too darn hot to be inside, but no one wants to fish the football out of the bushes.  It’s good for ages 6 to adult, I would say, and it’s very easy to drop in and out of.  It’s also entertaining to watch, if you can’t, won’t, or are too fat to play. 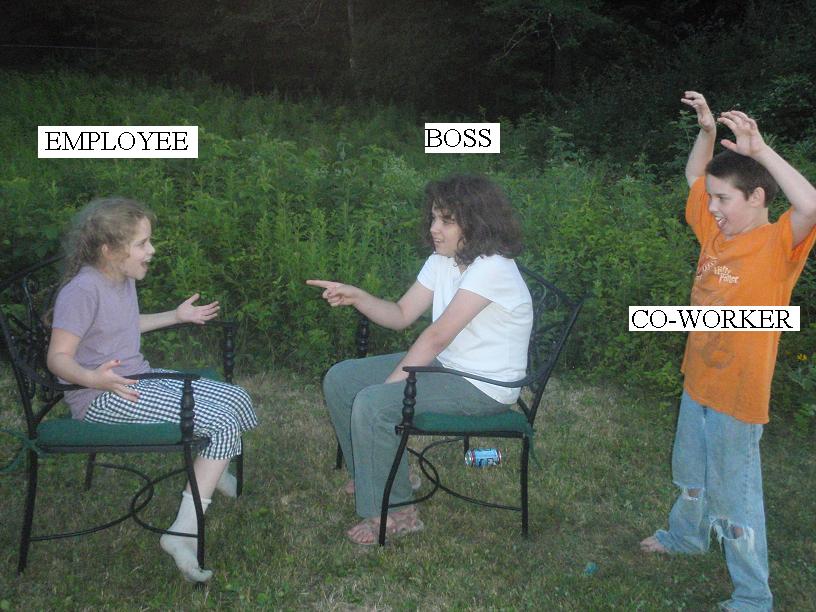 The boss barks at the employee, “Why were you late?”  The employee starts to make his excuses — but he has to describe what the co-worker is miming.  Remember, the boss can’t see him.

So the co-worker is marching, dancing, swatting imaginary flies, being strangled, fighting invisible gorillas, etc., and the employee is narrating it.

Then the boss, at any point he wants to, whips his head around to and yells at the co-worker, “What are you doing?”  And the co-worker has to instantly come up with a plausible explanation for whatever he was caught doing.  If he was acting out “killing a bear with my teeth,” for instance, he might say, “Oh, I was just eating one of these crullers.  Thanks for the crullers, boss!”

If the boss likes the excuse, he says, “Okay,” and the game resumes.  But if he doesn’t, he says, “You’re fired!” and the next person gets to be the co-worker.

Did I explain that right?  It’s seriously a lot of fun, and I’m so happy to know it, because if we had to play Simon Says one more time, Simon was going to say–

Well, I gave it a whole hour and a half, and even Googled “go play in traffic,” but I didn’t get to the end of that joke.  Sorry, folks.  Refunds at the door.

Prayer for this evening
Top 10
1
Bret Thoman, OFS
What Padre Pio saw in the Spanish Flu of 1918
2
Philip Kosloski
Padre Pio’s favorite prayer of petition
3
Philip Kosloski
5 Essential things used at Mass and their symbolism
4
Cerith Gardiner
7 Joys to be had from a lengthy marriage
5
Annalisa Teggi
Amputee from the waist down is thankful every day to be alive
6
Brett Salkeld
How to vaccinate like a Catholic
7
Lucandrea Massaro
This 3D “carbon copy” of Jesus was created using the ...
See More