Oh, it feels good to be on the cutting edge.

The other day, I read about a new sort of free-form playground in Wales, where kids apparently play with garbage and light fires, with adult approval. It’s meant to correct modern parents’ tendencies to shelter their children from every possible bump, bruise, and tumble, and to teach them to assess risk on their own.  It’s called “The Land.” According to an article in The Atlantic:

The ground is muddy in spots and, at one end, slopes down steeply to a creek where a big, faded plastic boat that most people would have thrown away is wedged into the bank. The center of the playground is dominated by a high pile of tires that is growing ever smaller as a redheaded girl and her friend roll them down the hill and into the creek … It’s still morning, but someone has already started a fire in the tin drum in the corner, perhaps because it’s late fall and wet-cold, or more likely because the kids here love to start fires. Three boys lounge in the only unbroken chairs around it; they are the oldest ones here, so no one complains … Nearby, a couple of boys are doing mad flips on a stack of filthy mattresses, which makes a fine trampoline. At the other end of the playground, a dozen or so of the younger kids dart in and out of large structures made up of wooden pallets stacked on top of one another.

Here’s a picture of The Land:

Despite not being in Europe, we’ve been experimenting with something similar on our property. At the risk of appearing pretentious, we refer to it as “The Yard.” Here’s a recent photo, featuring one of my courageous and confident children: 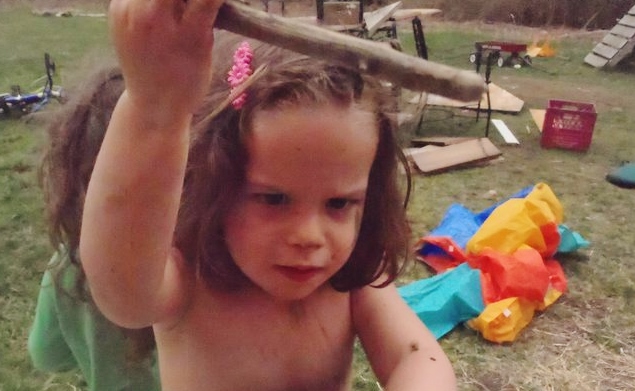 I don’t tend to hover over her, suppressing her natural inquisitiveness, because I’m afraid she will stab me.

Speaking of cutting edge: seriously, give that kid some space. She will cut you.

The Yard isn’t the only area place where we allow children to naturally innoculate themselves against adult phobias. Most modern bathrooms. monitored by paranoid, over-anxious helicopter parents, are unnaturally sterile and barren places, where cleaning happens daily and natural playthings such as toilet paper, wet toilet paper, and turds, are discarded, rather than cherished as the instruments of adventure. But our bathroom — “The Crapper,” we’ve dubbed it — was shaped by the children who attend it. Which is why I hold it in all day and use the gas station bathroom whenever I can.

One popular feature in The Crapper is a set of three broad planes (some refer to them as “walls,” but we think of them as “canvases”) where children can express their creativity in tactile and olfactory ways. The commercial colors of the toy aisle are banished in favor of the time-honored palate of yellow and brown.  In The Crapper, our children also learn about physics:  will the toilet flush when there is a copy of This Rock in the bowl? How about all the copies of This Rock? How about your little sister? Yes, here is a place of learning.

We also have an area called The Boys’ Room. I don’t want to talk about that, though. 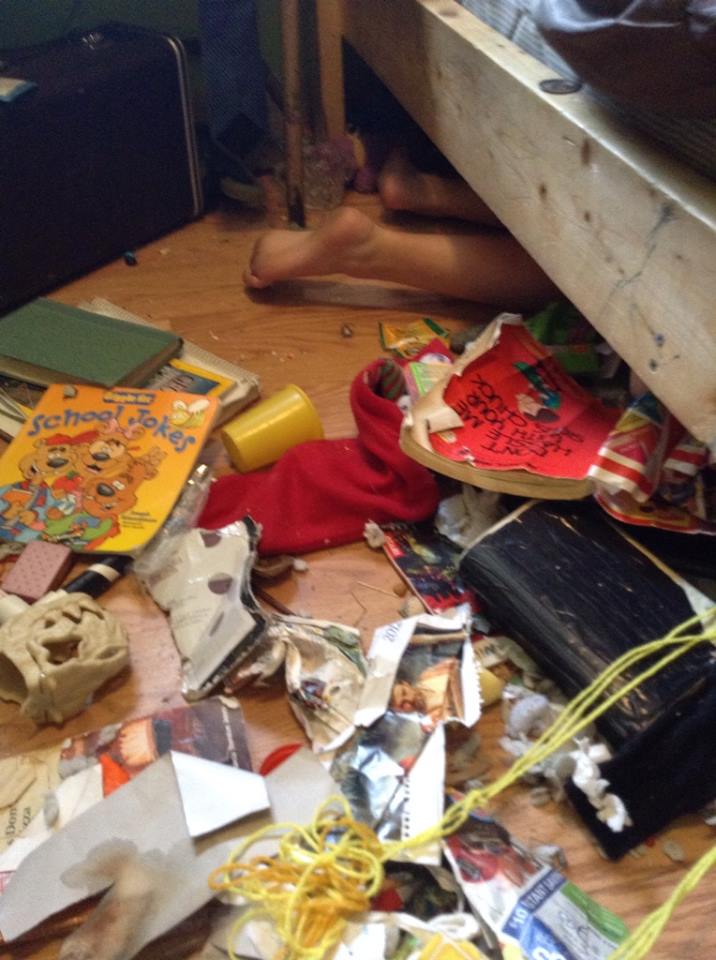 The only drawback is that we are having a hard time keeping the professionally trained playworkers around. They show up all bright-eyed with their gum boots and their sweaters with wooden toggles on them, ready to let children be children; but within hours, they’re nowhere to be found, leaving only a small pool of blood behind them. I ask the kids what happened, and they say they didn’t know. One kid did hear a hoarse cry that sounded like “such a thing as bad kids after all,” but other than that, it’s a mystery.

Overall, we are pleased with the results. Our children show no sign of being hobbled by phobias about hygiene or safety. On nights when Daddy works late, they are hardly even appear human.  And we have our philosophy of unstructured play and child-led inquisitiveness to thank. I can only hope that other American parents will follow our lead. Or at very least, drop some of those lawsuits.