Hollywood is Lady Tremaine: Why I love Branagh’s Cinderella 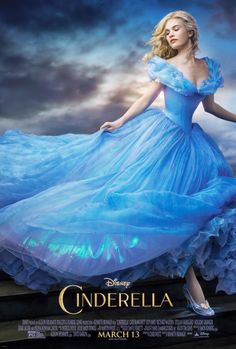 Saw it, liked it!

I agree with just about everything Steve Greydanus says here. I do think the movie would be judged a bit more critically if it had been made in any other decade. Since it dropped out of the blue into hypercynical 2015, it’s notable mostly for what it refuses to do: it refuses to reimagine, to be sassy, to be in your face, or jarring, or ironic, or myth-busting. It is, in short, a work of mercy offered for an audience who just wants, for once, to hear a story.

It’s not flawless. The dialogue is lackluster: the Captain (Nonso Anozie), resplendent in a brocaded tricorn and silky knee breeches, says to the prince, “We better get a move on, your highness.” Klonk. But every other aspect of the movie is gratifyingly consistent with itself. The world of the movie is fully realized, and everyone involved in it sets out to do something very basic: to tell a pleasant story in an enjoyable way.

The overall look occasionally crosses the line from gorgeous to gaudy, and a few scenes fairly bulge off the screen with sparkles and butterflies, topiary and gilt. But mostly, it just bathes your eyes in sweetness and splendor, because human beings still like that kind of thing. I am grateful to the ten million yards of satin who valiantly gave their lives for this lush spectacle.

The casting was impeccable. Cate Blanchet as the stepmother, Lady Tremaine, is chic, bloodless, and cruel, and she delivers one of the movie’s two memorable lines. As the prince’s retinue is at the door of their house, Cinderella realizes that her stepmother knows she is the chosen one. Her own daughters have no hope of catching the prince, but the stepmother smashes the glass slipper to destroy Cinderella’s chances anyway, just out of pure spite. After years of quiet endurance and attempts to be kind, Cinderella finally challenges her, and cries out, “Why are you so cruel?” The stepmother replies, “Because you are young, and innocent, and good, and I–”  And they understand each other perfectly, for a moment. The stepmother has suffered, too. If her response to suffering has been precisely the wrong one, at least there is a reason for it.

I couldn’t help but think that Lady Tremaine is the embodiment of Hollywood right now. “What have we ever done to you, but buy movie tickets and DVDs and $4 boxes of Whoppers?” the audience cries out. “Why do you keep serving up these crappy, unpleasant, revisionist nightmares?”  And Hollywood replies, “It’s because all you want is a simple, decent story, whereas we–” We, what? We, the movie industry, are a desperate, bloodless widow, still beautiful, but long past the hope of ever being in love again. And we need to take it out on someone.

Well, maybe I’m over thinking it. The second line that caught my ear was spoken by the gawky lizard footman (and the magical coach transformation scenes are some of the best in the movie. This is how to use CGI to show impossible things in a believably earthy way). On the way to the palace, Cinderella admits,”I’m frightened, Mr. Lizard. I’m only a girl, not a princess,” and the footman responds, “And I’m only a lizard, not a footman. Enjoy it while it lasts!”

Good advice! The movie is not a profound existential response about modernity and the legitimacy of the patriarchy. It’s just a pretty movie that wants you to enjoy it while it lasts. So that is what we did.