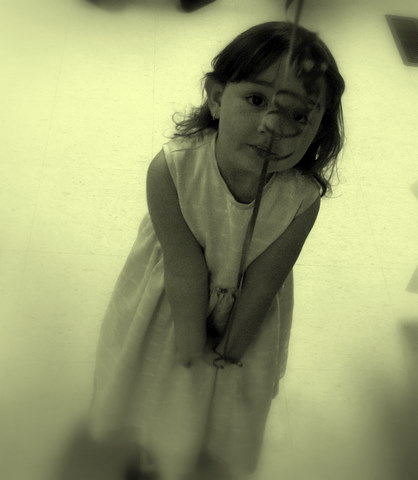 “I Don’t Own My Child’s Body” is the weirdly melodramatic title of a parenting piece from CNN Living.  (It’s from 2012, but is making the rounds again.)   You can see from the URL that the original title was probably something more like, “Give Grandma a Hug” — and that’s really all the piece is about.  The author’s kid sometimes doesn’t feel like hugging or kissing somebody, so her mom doesn’t make her:

She doesn’t have to hug or kiss anyone just because I say so, not even me. I will not override my own child’s currently strong instincts to back off from touching someone who she chooses not to touch.

Okay, lady.  Big deal.  I don’t make my kid take off her favorite outfit, which happens to be a heavily upholstered puppy costume, but it’s because (a) it’s not hurting anyone, and (b) I’m saving my strength for the big battles.  And I also don’t make my kids hug or kiss people they don’t want to hug or kiss.  Like the author’s child, they are required to be polite, but not in a way that skeeves them out.  But then the author goes on to say:

I figure her body is actually hers, not mine.

sends a message that there are certain situations [when] it’s not up to them what they do with their bodies … If they are obligated to be affectionate even if they don’t want to, it makes them vulnerable to sexual abuse later on.

She backs this up with a warning from parenting blogger Jennifer Lehr:

“Certainly no parent would wish for their teenager or adult child to feel pressure to reciprocate unwanted sexual advances, yet many teach their children at a young age that it’s their job to use their bodies to make others happy,” [Lehr] said

The readers of the piece largely agreed with the author, many of them immediately bringing up the phrase “rape culture.”  They firmly believe that there is a direct, possibly inevitable line between “Please give Grammy a kiss, because it makes her happy” and “Please put out for the entire varsity football team, because it makes you valuable as a person.”

I suppose it’s possible that some kids could make that connection, but only if there are other severe problems with the family of origin or with the child’s mental or emotional health.  Healthy families with standard-issue kids do not need to be on permanent freak-out mode about their kids’ bodies.  What you do is you tell your kids, “Look, unless I say it’s okay, like at the doctor’s office, nobody is supposed to touch you under your clothes, and nobody is supposed to get near the parts of your bodies that are covered by underwear.  And if somebody does something that makes you feel creepy, you tell Mom or Dad right away.”  And then you give them lots and lots of examples of normal affectionate behavior, so they can tell the difference between things you go along with, and things you fight.

This article, with its ludicrous leap of logic, reminded me of a phenomenon I see more and more:  the most progressive parents, those who embrace every modern degradation of sex, marriage, and childbearing, are the ones who are the most likely to go completely overboard when trying to keep their children safe.  I don’t know a darn thing about the author of this article, but if she’s writing for a major news outlet, chances are she’s not pro-life.  Her audience certainly isn’t likely to be.  And yet here she is, saying, “I don’t own my child’s body.”

I’m going to try really hard not to talk about abortion here, because I don’t want to have the same old, same old, same old conversation.  I know that pro-lifers will say, “If you don’t own your child’s body, then you don’t have the right to murder him in the womb!” and pro-choicers will say, “If a child owns his own body, then so do I, and that includes anything that might be inside my body, like a parasitic fetus!”

So let’s not even talk about that phrase, “I don’t own my child’s body.”  Let’s talk about why this kind of article is so common — why, as our culture accepts more and more horrors as commonplace, there is an attendant increase in hysteria over little things, trivial dangers, potential risks.

Why do we fret over the dangers of hugging, but shrug aside — well, death?  The death of babies.   The crushing of heads, the marketing of organs. How is this possible?

It’s not enough to say, “Hypocrisy!  Evil!”  I believe the two phenomena, the hyper-tenderness and the cruelty, are actually related:  one comes from the other.

We look around, compare our world to that of our grandparents, and the guilt seeps in like blood through a bandage. We know there is something amiss – all of us do.  And so we compensate by making sure that we’re assiduous about bodily integrity and safety for our chosen children.

Extremism is a very convenient mask for existential negligence and evil.  When we get hysterical over something minor, we feel like we’ve done our duty — we’ve hit all the right notes: I CARE about my child.  I THINK about how I am raising her.  I have GUIDING PRINCIPLES that sometimes make other people feel uncomfortable.  I’m not AFRAID to tackle the hard issues.

And once you’ve hit the right notes, it’s easier to tell yourself that you’re singing a tune that is very beautiful indeed — never mind that that “Ave Maria“ and “Deutschland Uber Alles” have a lot of notes in common, too. It’s no coincidence that modern people are capable of both deep cruelty and overly fastidious care:  these are two sides of the same coin.