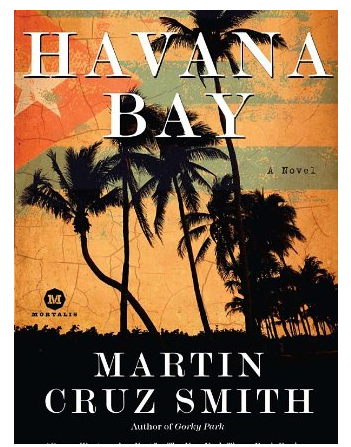 Fourth in the Arkady Renko series that began with the brilliant Gorky Park, about which I said this:

Maybe because it was so popular when it came out, or maybe because the author’s name is so snazzy, I somehow assumed that it was a trashy beach book, or some kind of dated, two-bit thriller.  Boy, was I wrong.  This is the real deal — real literature, a genuinely great novel.  Almost Dostoevskian at times. The characters are so real.  Their sorrows and loves are so real.  The places are so real.  My memories of passages I read are as strong as memories of places I’ve actually, physically visited.  The plot is insanely complicated, but it’s never outside the realm of what might, actually possibly happen to someone who is as unlucky, as talented, as driven, and as flawed, and as Russian as Moscow homicide investigator Arkady Renko.

Havana Bay is not quite on the same level as Gorky Park (so farPolar Starcomes closest. I can’t remember the last time I felt so cold while reading a book), and I don’t think I’m just imagining it when the plot feels a little wobbly; but it’s still good writing. I came across this passage last night:

Bugai had kept retreating and Arkady had kept advancing until he stepped on a pencil that broke with a sharp crack. The vice consul jumped and looked not as cool as a jellyfish anymore, more like an egg yolk at the sight of a fork. His nervousness reminded Arkady that he had killed a man; whether in self-defense or not, killing someone was a violent act and not likely to attract new friends.

This tone of melanchony wiseassery is pretty typical. Love that: like an egg yolk at the sight of a fork. Ha.

The IT Crowd. If you don’t like very broad British comedy, then avert your eyes. It’s a spoof of the nerdliest nerds navigating office life and trying to have a social life.Northanger Abbey it ain’t. There is a lot of naughty language, poo jokes, sex  jokes, screaming, etc. Just funny enough, sometimes hilarious. Honestly, it’s not something I’d sit and watch avidly, but it’s pretty good for when you’re blitzed and just want something making amusing noises while you sip your glass of Chateau de There There, The Kids Are In Bed Now. And I kind of love the opening credits:

Bonus: Roy, the tall Irish doofus, also does the voice of the narrator for Puffin Rock. It’s a comforting brown corduroy kind of voice, just right.

Son Little’s self-titled new album, which my dear husband bought for me as a surprise. I’m listening to it now.

Here’s “Lay Down,” which I could listen to on a loop all day (video is PG):

On the label’s website, it says, “For Son Little, studio time is a joy, where every good idea leads to four more.”
I’ve mentioned Son Little before. The many-layered production of these songs is a delight, but the real pleasure is in his voice, where there is both brass and velvet and deep dark earth. Best new music I’ve heard in years and years.