In my post for the Register about the Black Mass that will be reenacted at Harvard, I included this paragraph:

Satan is real, and he is not fussy. He doesn’t care if you are kidding or not when you call him by name. This is why I tell my kids to stay far, far away from participating in anything occult — ouija boards, tarot cards, etc. — even if it’s just a game.  An invitation is an invitation, and Satan doesn’t stand on manners. You may not see Exorcist-style special effects when the Father of Lies creeps into your life. You may not realize anything has happened to you at all, as the rift between you and God slowly gets deeper and wider.

Seriously? Ouija boards? Tarot cards? What other things made by Parker Bros. are we supposed to be a afraid of? Are the kids not allowed to dress up for Halloween? How worried should we be about that Harry Potter fellow?

As with so many other things, we try to find that middle way when dealing with occult-ish things in our family. We don’t want to be screaming meemies who hide under the rug every time someone says the m-word (magic); but we want to make sure our kids don’t innocently slide into something truly dangerous.

There are three categories of things that raise questions:

Things expressly designed to make contact with spirits other than God or the saints or angels. This includes tarot cards and ouija boards – 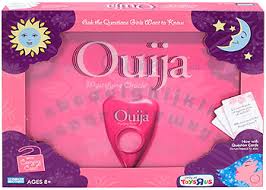 and just because Parker Brothers is dumb enough to put out a kiddie version of these things doesn’t mean they’re harmless. They are explicitly occult, and, as I said in the Register post, the devil doesn’t care if you are just kidding, or don’t understand what you are doing. An invitation is an invitation; and Catholics are, in fact,expressly forbidden to get involved with this kind of thing, so there’s not much to decide. Listen to your mother!

Things which once had or may have had occult or pagan origins, but have changed or been “baptized,” and now signify something else. The gleeful celebration of Halloween, complete with skulls and bats and gore, falls into this category. My husband and I make decisions about these things on a case-by-case basis, and sometimes decide to pull away from creepy stuff for a while if it seems like it’s having a bad effect on the kids, or if it crosses the line into true perversity. But “spooky” is not the same as “occult,” and the Church has a long history of facing death and fear head-on; so it’s entirely possible to be a good Catholic and still enjoy scary stuff. I talk about this in a few posts: Twofer Costumes for the Conflicted Catholic Family;  Do Brains Break the Communion Fast?    and Twelve Movies to Terrify Your Kids.

Yoga also falls into this category. If it’s just exercise, it’s just exercise, and if it calms you down, super — and I think 99% of Catholics who do yoga are doing fine. If you’re trying to find spiritual enlightenment through yoga, though, I’d be wary. The Church has that covered already. Mind/body stuff is weird. It’s not for nothing that the sacraments use materials we can taste, touch, and smell. What you do with your body means something, so make sure you know what you mean!

Things which deal with or discuss magic or the occult, such as the Harry Potter books. Our kids have read and enjoyed the books. My husband and I read them first, to see what all the fuss was about. We decided that, since none of our kids show any particular attraction to dark or occult things, there was no danger in letting them read about magic — especially since it was a story about goodness and love and such conquering evil and darkness and such. If I had a kid who was easily swayed, and showed an unhealthy interest in magic or new age stuff, we’d probably make a wider berth around Harry Potter (and this would be no tragedy, because the books are not exactly irreplaceable in the canon of western literature).

My son recently wanted to look up Harry Potter curses to beef up a game they were playing. So I said yes, but first we discussed how Harry Potter is clearly fiction, but some people take it more seriously than that, and that they can get drawn into dangerous waters, so we don’t want to get sucked in with them. He volunteered that, if he saw anything that looked at all weird or fishy, he’d shut the window immediately (which he actually does).

Dungeons and Dragons (etc.) is in this category, too. Some of our kids play it with other kids who are decent and grounded, and just want to have fun imagining crazy and exciting stuff. I would not let my kids play it with a group of kids who were fascinated by the occult in general.  You get out of it what you put into it.

People who argue that the Narnia or Lord of the Rings books are dangerous are simply not serious people, and when they want to talk about this stuff, I have to go clean out the lint trap of my dryer, because it’s more edifying.  I have, however, noticed a lot of books aimed at middle school girls which tell the stories of wise girls who understand the ways of the earth and herbs, etc. etc., and harsh, suspicious men, especially clergy, want to quash and oppress them. These are ideas which can seep into young imaginations and wreak all kinds of havoc (and they tend to be stupid books anyway), so I’ve asked my kids to stay away from these. Scorn is a powerful teaching aid.

Overall, we keep a sharp eye out, and reevaluate often what we will and won’t allow in the house. And we talk, talk, talk about it, and try to keep a sense of humor. If parents freak out when kids do something that might be wrong, kids will not go to parents for help when there is something wrong. There is a lot of weird stuff floating around, and kids need to be taught a healthy sense of caution, without making them afraid of the dark.

How about you? How do you handle this in your house? Has your thinking or approach changed over the years?