No earthquake here. At the Synod, the Church teaches us how to dress for the feast. 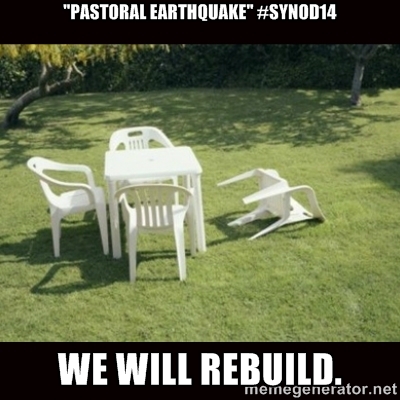 In this parable, the king has invited all the expected, honored guests to his son’s wedding, but they not only refused his invitation, but abused and killed the messengers who invited them.

This  is old news — as old as Adam and Eve, as old as the War in Heaven — and would not even be a story at all if the king didn’t then decide to do something scandalous and unexpected:  he invites people who normally don’t get invited to the king’s house:

Then he said to his servants, ‘The feast is ready, but those who were invited were not worthy to come. Go out, therefore, into the main roads and invite to the feast whomever you find. The servants went out into the streets and gathered all they found, bad and good alike, and the hall was filled with guests.

Good and bad alike, meaning cohabitating couples, second-marriaging couples, and people in love with a gay partner (not to mention people in “irregular” situations less familiar to first world Catholics! Remember, the Synod is for everyone, not just the Northern Hemisphere). People who aren’t living up to Church teaching, but who nevertheless want in to that gorgeous, beautiful, nourishing, splendid party hall, because they know a good thing when they see it.

The feast is ready. The king has got all this good stuff, and he wants to share it with someone, so why not open the doors wider? This is exactly what the king in the parable does does.

But then there’s this:

But when the king came in to meet the guests, he saw a man there not dressed in a wedding garment. The king said to him, ‘My friend, how is it that you came in here without a wedding garment?’ But he was reduced to silence. Then the king said to his attendants, ‘Bind his hands and feet, and cast him into the darkness outside, where there will be wailing and grinding of teeth.’ Many are invited, but few are chosen.”

This is the second part of what the Church has always taught: God invites, and we decide how far we want to respond to that invitation. What is implied in the story is that the guest knew very well that he wasn’t dressed properly, and doesn’t even have an excuse. He chooses  not to come prepared, or to make any changes. When we make no effort, show no signs of being willing to change or even defend our actions, then why should you be there?

This, too, is the message coming out of the Synod. An invitation is for something. It’s a beginning, and way to get people to put their foot in the door so we can figure out what they need next, and what is needed from them. If you do not invite them, you will never get to that point.

The mid-term report described as an “earthquake” is nothing of the kind. It’s a reassertion of the constant, consistent teaching of the Church, and even the constant, consistent teaching of God the Father toward His wayward people: Come to Me. Please, come to me. Yes, I want you to change, and I will demand things of you. But we can’t get anywhere unless you come to Me.

And once you do accept the invitation, the Synod is saying that pastors and deacons and RCIA directors and anyone involved with catechesis are to explain fully what it means to be a member of the Church — keeping in mind that probably the majority of Catholics in the world have almost none of even a basic understanding of what marriage is for, what sex is for, or what life is for. But a good many of them have good intentions, want to be good to each other, want to raise healthy families, and want to be loved. So that’s where you start: with the invitation.

The  Archdiocese of Philadelphia has published an official teaching document calledLove Is Our Mission.  It’s a short book designed to prepare us for the upcoming World Meeting of Families, and illuminates contentious issues like gradualism and the pastoral care of divorced Catholics. According to Archbishop Chaput, this catechetical document has ten steps:

It starts with the purpose of our creation and moves into the nature of our sexuality; the covenant of marriage; the importance of children; the place of priesthood and religious life in the ecology of the Christian community; the Christian home as a refuge for the wounded heart; the role of the Church; and the missionary witness of Christian families to the wider world.

So, this is what the Church is doing: it is inviting people to the feast, and it is instructing them in how to “dress” the soul, how to behave as an honored guest so they can participate in the feast — so they can follow up on the invitation. In short, it is teaching us how to be a Catholic.

The Church, at the Synod, is doing its job, its one and only job of inviting and instructing. Tell me again how this is a problem — how it ought, instead, to be skipping straight to the “waling and gnashing of teeth” part that so many Catholics seem  to favor.

If a cohabitating couple shows up for a baptism, what do we do? Or if a couple with an un-annulled second marriage, or if a gay couple turns up wanting to lead some ministry, what do we do? Do you slam the door? No, we say, “Come in, and let’s talk about what you have right so far. Then we can figure out what’s  next.”

This twisting of words, too, is constant and consistent. People have twisted the words of Jesus Christ from the moment the sound waves were still dissipating into the atmosphere of Jerusalem. But if you read the entire document, if you pay close attention and don’t get all your information from one ideological side or the other, it will be clear that all the Synod is saying is what the Church has always said: invite whomever you find, so you can teach them how to be good guests, so we can all enjoy the feast together.

Tell me again how this is a problem. And while you’re at it, tell the king.