Powerful Ad Shows What a Little Girl Hears When You Tell Her She’s Pretty” runs the headline on the Huffington Post, describing a new ad by Verizon.

Before we even watch the video or form an opinion, let’s remember one thing. The real, true, deep down message of this ad is that you, the viewer, should like Verizon. Whatever societal goals it may have, it’s an ad. It is trying to sell something, and so it’s a given that the message it’s sending is calculated to stroke the egos of the viewer. So there’s that.

The video depicts one girl’s development from toddler to teenager. She wanders curiously through nature, examines the plants and animals around her, creates an astronomy project, and builds a rocket with her older brother. But all along the way, she hears many all-too-common refrains from her parents: “Who’s my pretty girl?” “Don’t get your dress dirty,” “You don’t want to mess with that,” and “Be careful with that. Why don’t you hand that to your brother?” These statements are subtle, but the ad suggests that they can ultimately discourage girls from pursuing traditionally male-dominated STEM subjects in school.

Sure. If someone followed me around telling me “Knock it off!” every time I got interested in math or science, I would probably stop pursuing math and science. It’s a bad idea to thwart kids (boys and girls) and to discourage their curiosity and intelligence; and it’s especially absurd to tell girls, overtly or by omission, that their main job is to be pretty. I’m fairly sure Thomas More, Edith Stein, and Gianna Molla already knew that, without any help from Verizon.

But the ad ends this way: “Isn’t it time we told her she’s pretty brilliant, too?”*

Is that what we’re doing when we do say, “You’re so pretty”? When girls hear, “You’re pretty,” does that automatically mean they can’t hear anything else we say? Not that I’ve noticed. Here is what I have noticed:

Why? Because women were made beautiful. They were designed that way. No, not every woman; no, not all the time; and no, not beauty above all other things. But the world is a machine, and one of its driving forces is the attraction between the sexes, where men delight in women and women delight in showing their beauty to men. This is not oppression; this is not sexism; this is not some manipulative societal construct — or at least it doesn’t have to be. It’s a gift from God that girls and women can cultivate and delight in beauty — the beauty around them, and the beauty in themselves. Yes, even their physical beauty. Yes, even from a very young age. 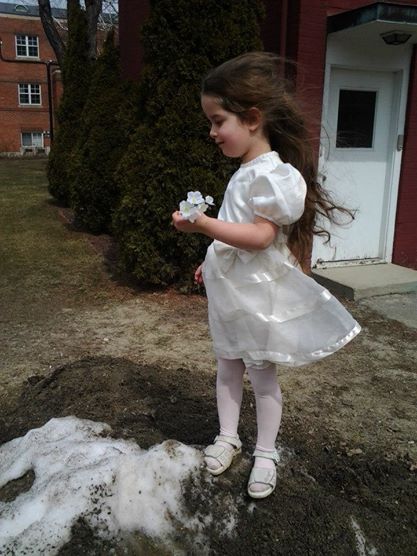 So no, don’t tell your daughters that they must be pretty because they can’t be anything else. But don’t make them think that beauty is petty, either. Beauty is one of the transcendentals, which means that beauty it is one of the paths to God. Even when that beauty resides in a little girl.

And one more thing: it is good for us, the beholders, to praise beauty when we see it. It is a good thing to see something beautiful and to let ourselves murmur, “Oh, how lovely you are!” We are made to receive it and to enjoy it. We are not made to quash and rein in everything that brings us delight. There is not much beautiful in the world. Why deny yourself what little there is? Parents, let yourself tell your girls they’re beautiful. She needs it, and so do you.