“Pop! Out comes the corpse!” or, fun with the Fishers

Our summer library reading program ended not with a bang, but a howl, then a whimper, then ice cream, and then more howling. It was an unfortunate combination of overtired kids, high expectations, generalized raffle anxiety, and a hideous game which I don’t know who thought was a good idea, where you tie balloons to your ankles and run around getting stomped at by bigger, faster kids. I guess there was a bang and a whimper for that part, come to think of it.

There were also some bad feelings among the other moms when I stepped forward to claim the grand prize (two movie tickets and a pizza dinner) on behalf of my two-year-old, who won fair and square by having some books read to her.  Too bad! The kid has really been looking forward to a night out with her husband, but she just can’t justify it in the budget right now. Fair’s fair.

There was one good thing, though: one of my kids won a card game called Snake Oil, and the whole family has been playing it steadily all week. Yay, no glowing screen! 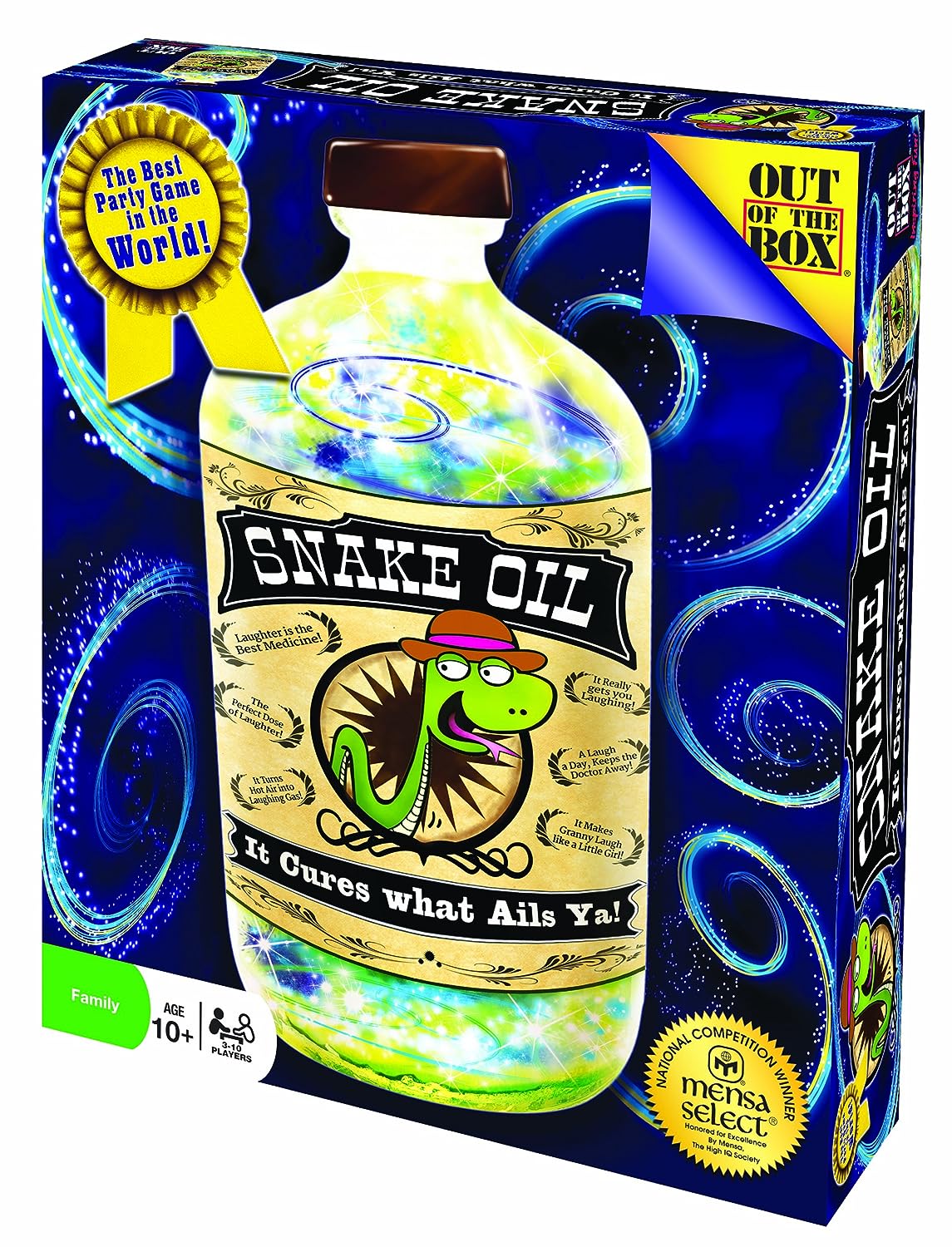 One person is the customer. He chooses a customer card and announces his profession or state in life: nurse, billionaire, cheerleader, zombie, plumber, witch, etc.

All the other players get six word cards each.  So you might get: death, balloon, burp, button, lightning, water; or flag, coffin, glove, cheese, leg, regret. From these, you must pick two words to invent a product that the customer would want to buy. Everyone makes a persuasive sales pitch 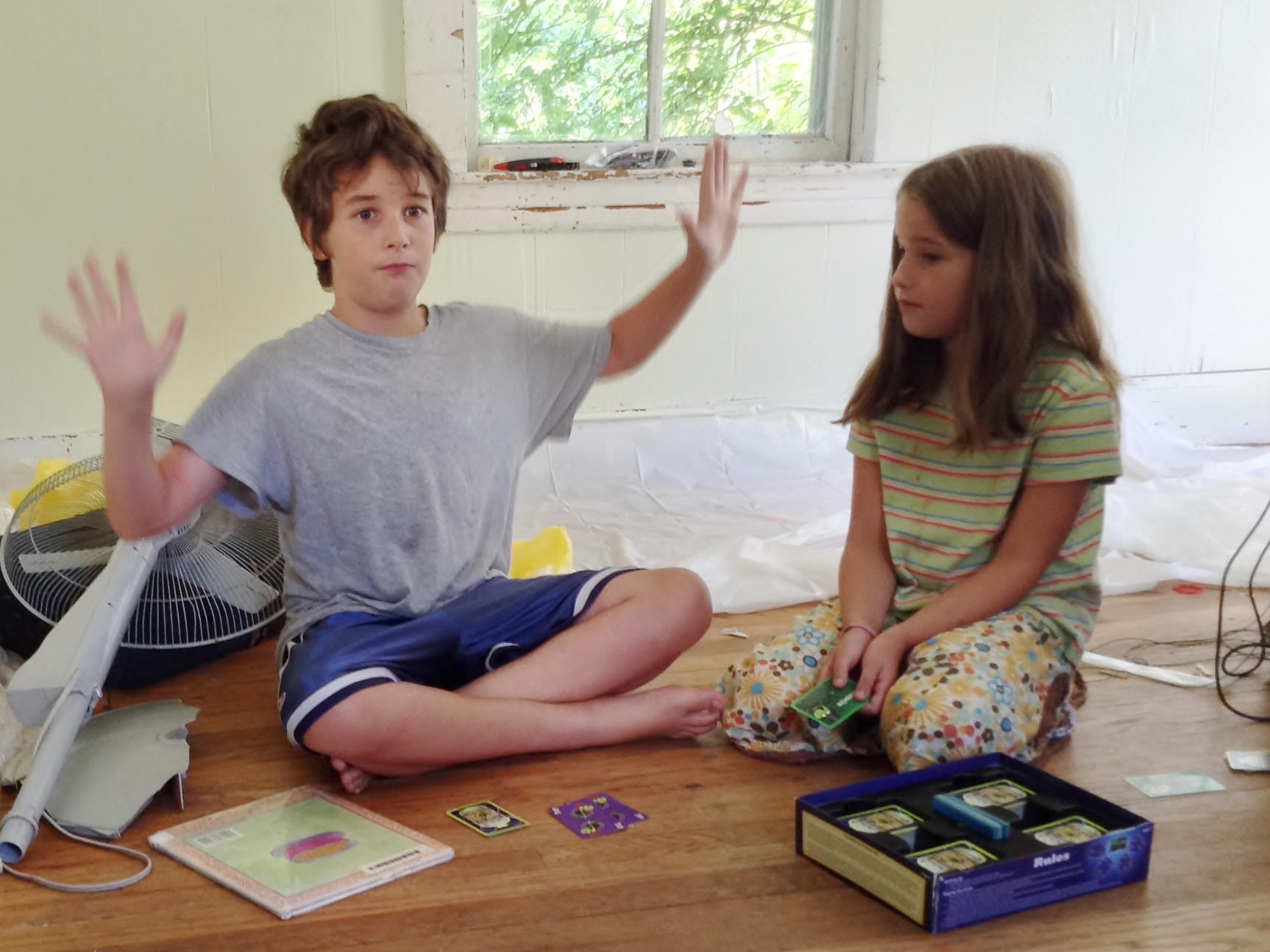 to the alert, bright-eyed customer 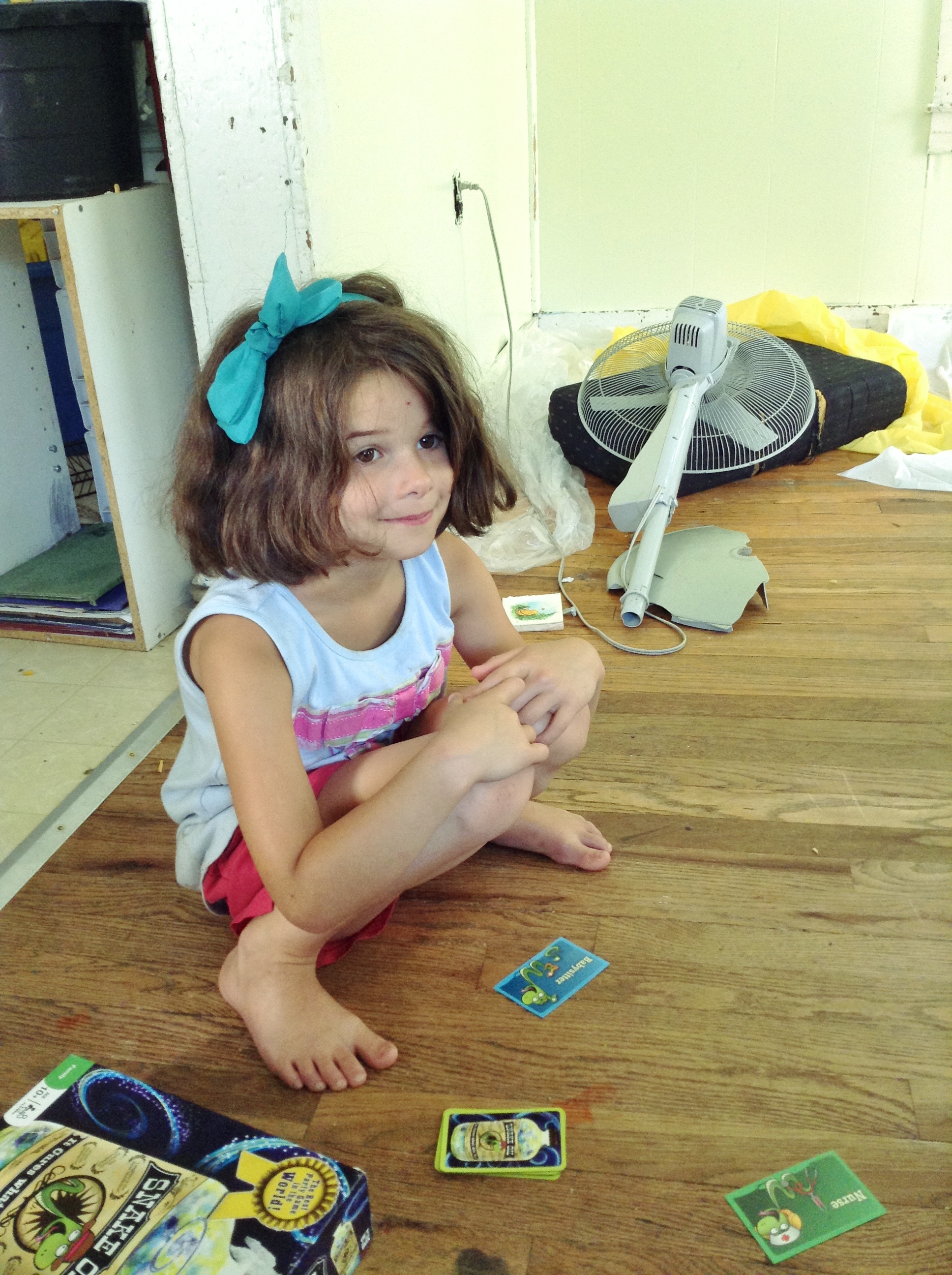 and the customer awards his card to the person with the best product. (Pardon the rubble in the background; I am halfway through painting the living room!)

My kids are good improvisers, and huge hams. 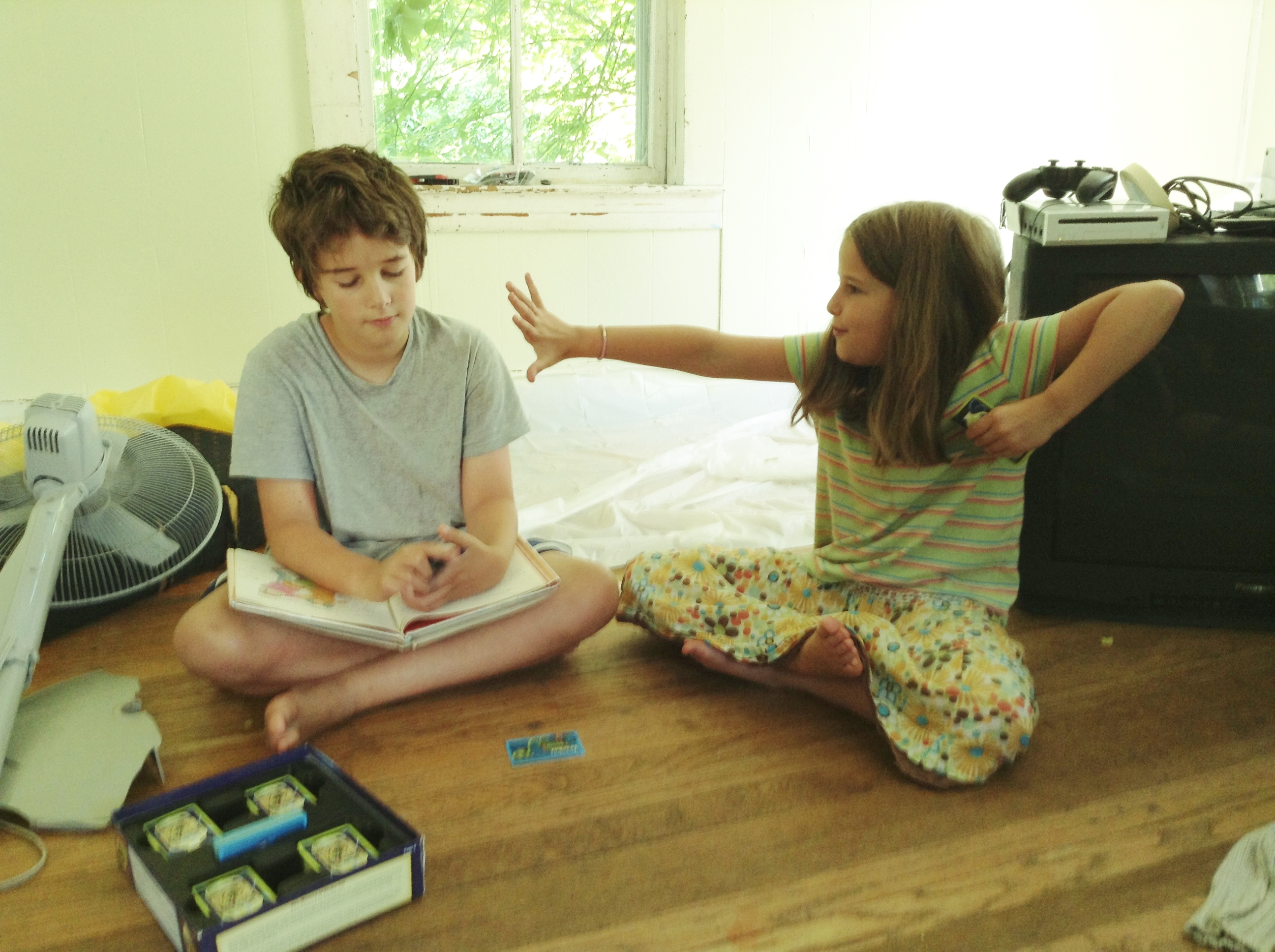 The teenagers like playing, too, and so do I. It says “ages 10+” but it’s pretty easy to let the illiterate ones be “partners,” so really everyone can play this game, and the older ones are so full of ideas that they are willing to help out the little guys. 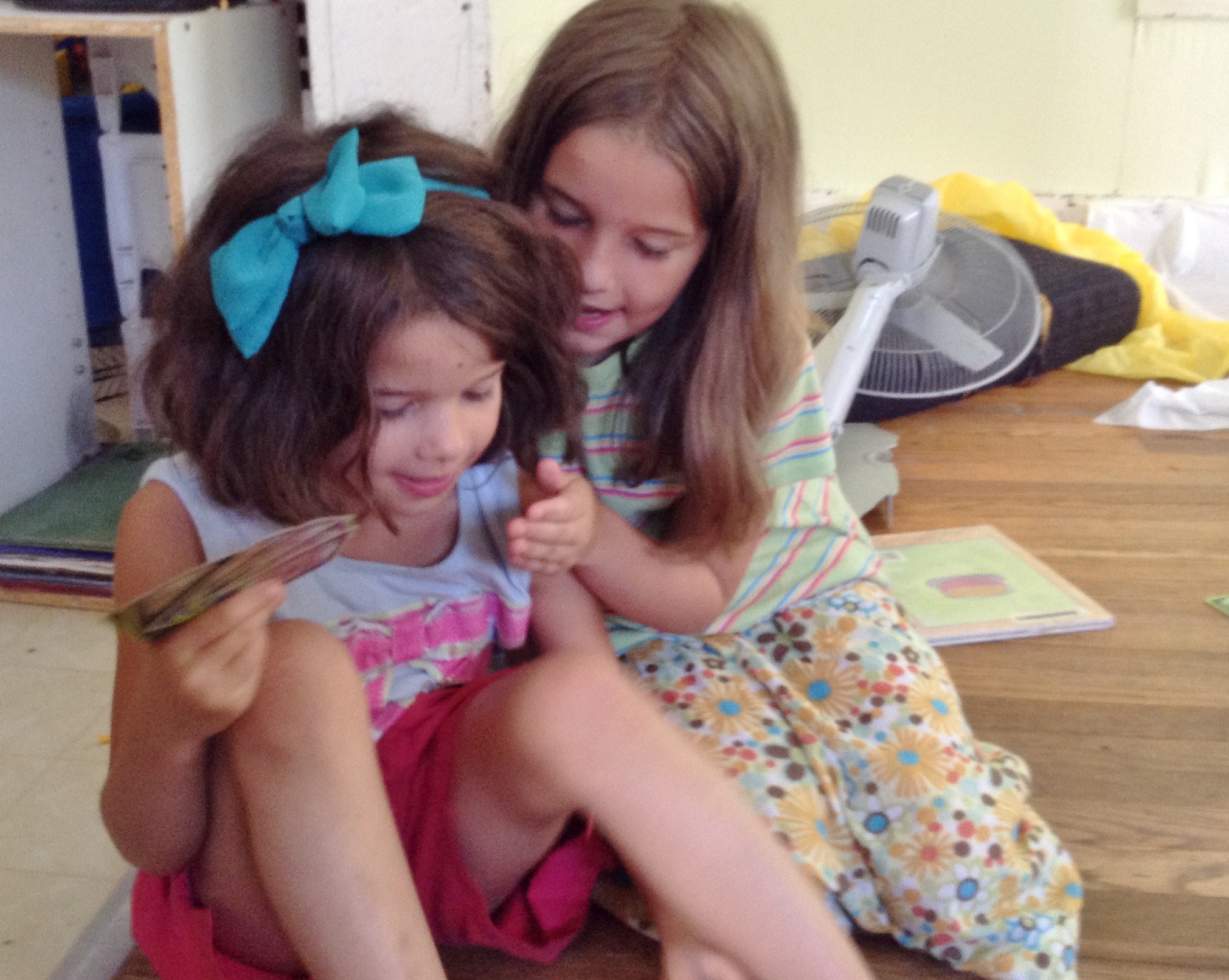 I can imagine it being fun for all adults, with enough liquor in them.  And you can do a full game in about twenty minutes! And best of all, we now have a new running joke to carry us through the next few months, courtesy of my slightly morbid eight-year-old daughter, who was hawking Water Snakes to a grave robber: “Pop! Out comes the corpse!” (She won that round.)