Roald Dahl > John Steinbeck (up to a point) 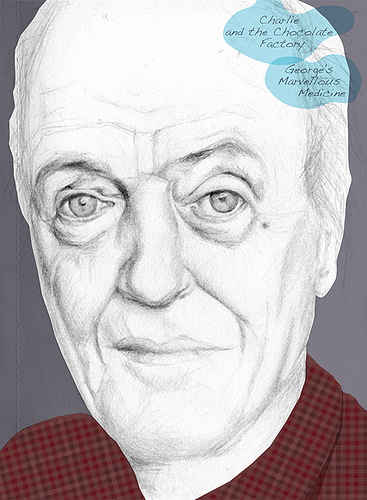 Today was Roald Dahl Day. You’ve probably read all the famous books by him —James and the Giant Peach, Charlie and the Chocolate Factory, The Witches (which is seriously disturbing), The BFG, The Twits. I loved them all when I was a kid, and I’m more or less happy to see my kids enjoying them; but as an adult re-reading them, the constant drumbeat of “challenge authority” is worrisome.

If you read Dahl’s autobiography of his childhood, Boy, it’s obvious why he wrote his children’s books the way he did: the adults in his life were massively cruel and masochistic to him and the thousands of defenseless school boys who were churned through the barbaric British school system. The message of rebellion and retribution he works out in his stories is fine in Charlie and the Chocolate Factory, when only really wicked people lose, and they’ll all come out in the wash anyway; it’s a little upsetting in Matilda, when the heroine is nakedly contemptuous of her (admittedly contemptible) parents; and it’s even less fine in Danny, the Champion of the Worldwhen the immensely appealing hero father can poach game simply because the rich man is deemed unworthy of his riches.

Still, his books are good — great, even. Some of the short stories in The Wonderful Story of Henry Sugar and Six Moreare stunning. But my current favorite is Going Solo, the second part of his autobiography. I happened to read it at the same time as I was reading John Steinbeck’s Travels with Charley: In Search of America. (You’ll have to pardon me: I don’t have either book in front of me at the moment, so I won’t be quoting any passages!)

Steinbeck is, of course, a master novelist and short story writer; but when he’s his own main character, it’s just about unbearable. Oh man, starting on page one, it’s just him licking his own paws adoringly like a narcissistic kitten, purring a little tune of self-admiration into the mirror as he thinks about how tough and gritty and honest and wise he is.  I couldn’t even finish it. So false, so preening, so stilted. Turns out it was all fake, anyway. Well, it sounded fake.

Dahl’s story of his own exploits is just the opposite. He survives and even makes good in the most ridiculous, bizarre misadventures, but he makes it clear that he’s just this guy, you know? As he writes, he’s clearly still angry at the RAF for sending him and his friends out into the sky with almost no training. He’s still a bit embarrassed by his failures. And he writes with stunning immediacy, making you seehearfeeltouchtaste the desert, the sky, the food, the boredom, the fear, the ridiculousness of it all.

Recommended: Going Solo
Disrecommended: Travels with Charley: In Search of My Own Magnificent Ass with Both Hands: Read It If You Can (But You Can’t Because It Sucks)