Seven Quick Takes: The Thing and the Other Thing, and so on up to seven

1.  Scott Richert is raising funds for the Rockford Area Pregnancy Care Center with a walk for life.  You may know Scott for his yeoman’s work on About.com.  I consult his Catholicism page all the time, and am very grateful for his clear and thorough information about the Church!  His fundraiser is on fire right now, and he has blown past several goals already.  If you want to get in on sending a lovely big check to this very worth cause, check out the RAPCC fundraising page.

2.  A couple of days ago, I shared an illuminating article, “The Sin of Adoption,” by Brianna Heldt.  It explores the ins and outs of international adoption, and how Catholics, evangelicals, and non-religious people respond to the insanely complicated nuances and, well, complications of the issue.  It was responding to a rather nasty article in called “Orphan Fever” published in Mother Jones.  Darwin Catholic has posted a response by another Catholic, who does a good job of “poking some holes” in the Mother Jones article.  Very interesting stuff!  I can’t help feeling grateful that it’s extremely unlikely our family ever has to make our way through a minefield like international adoption.  These articles raise my esteem even higher for couples who do manage to fight their way through.

3.  Today is the feast day of one of my favorite saints (and one of my husband’s patrons), Fr. Damien of Molokai.

His feast day is not on the day of his death, as is traditional — apparently so that it wouldn’t fall during Lent.  Here’s a short introduction to this wonderful saint, who volunteered, as a young priest, to minister to the lepers who were quarantined on a squalid island and living like animals.  I have heard that no one else dared to come to the island, because leprosy is so contagious; so when Fr. Damien wanted to go to confession, he had to shout across the water to another priest who was safely in a rowboat.  I always imagined the conversation like this:

Fr. Damien:  I said I lost my temper, and I was impatient!

4.  Have I ever told you about the joys of raising little girls?  The ones at home are 17 months, 4, and 5.  I usually do my writing in the morning, and they pal around together, doing the things that little girls do — you know, dress up in princess dresses, quietly swipe my camera, lie down in the driveway and pretend to be dead, quietly put my camera back . . . 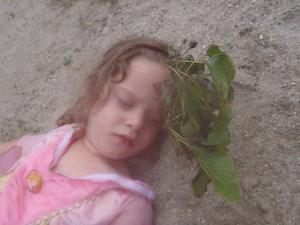 5.  My husband stopped working for a certain newspaper back in January.  If you have any experience with a newspaper office, you may realize that they are not necessarily on the cutting edge of technology.

They had this system, for instance, where they would print out a draft of the paper and then pass from the editorial office to the production office through a hole in the floor.  Sometimes it would get stuck, so they had a special stick just for poking it through.  So, the other day, they called him up out of the blue, asking him to mail him the key to the office, which they claim he never returned.  He suggested that they just make a copy of their existing key.  They said, “You can’t just do that!” And they’re right, you can’t.  There’s no such thing as Home Depot.  No such thing!!!!  (They also said, when he suggested putting video clips on their website, that if people wanted to see video, they’d watch TV.  So there you are.)  Mamas, don’t let your children grow up to be journalists.  Unless your children are jerks and have it coming.

6.  I now have two bumper stickers on my car!  One is for my kids’ school (and I can’t tell you how moved I was when one of the board members suggested I put one on.  I always assumed they’d rather keep that affiliation quiet.)  The other one is this one:

Well, this is the cropped version I can manage to upload, because I am a technological moron today.  The actual bumper sticker is the entire word “COEXIST,” with the little baby in the O.  I got it as a gift from Arina Grossu, and I love it.  I can’t figure out who’s selling them, though.  On the sticker, it says “Isa-Life Productions.”  Anyone know anything about them?  And yes, now that I have a pro-life bumper sticker on my car, I’ve been a little more careful not to drive like such an ass.  In fact, I was formerly in the habit of driving with my ass.  And they gave me a ticket for it!  Now what am I supposed to do?  Say, “I’m sorry, your honor, I’m not as limber as I used to be?”

7.  This week, I’ve lost more friends on Facebook than I can ever remember doing, and I’m not even sure why.  I guess I’ve been pretty rude and pushy, suspicious and nasty, and have taken things in the worst possible way.  To anyone I’ve offended with my words this week, please consider this my apology to you: