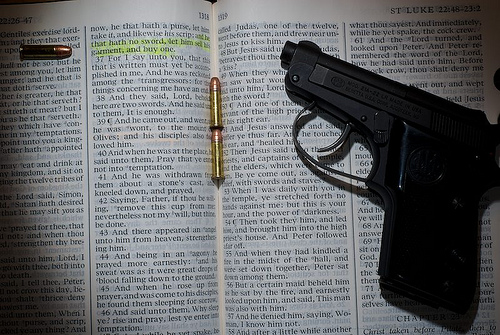 I hereby move that American Catholics live up to their bad reputation and stop reading the Bible.

Or at least, I move that they stop treating the Bible like a grab bag of political gotcha lines, rustling around until they find something that has all the right key words in it, and then wrenching it out by the roots, leaving all the really really important contextbehind.

Robert Laurie, Our resident lifelong Catholic, has made a difficult decision about his church, the apparent socialist who runs it, and the priests, cardinals, and bishops who refuse to take a stand. Read this one, folks….

So like an idiot, I went ahead and read it.

Now, I’ve heard over and over again that we’re supposed to be Catholics first, conservatives second; but I guess I had forgotten that there are some people who not only don’t do this, but don’t think they have to. They openly choose the worst extremes of conservatism over their faith. The guy seems to believe that the main reason Pope Francis wrote Laudato Si’ was because he is a big fraidy cat weenie who wants to be popular with his liberal friends (because if there’s one thing we know about Jorge Bergoglio, it’s that he’s a cowardly man who, above all, fears rocking the boat).

I mentioned before that I’ve made my decision about the church. It’s this: I’m not interested in being part of a group which is trending both anti-capitalist and anti-West. I’m also not inclined to ally myself with Priests, Cardinals, and Bishops who are unwilling to speak their minds. This isn’t a rejection of faith, or of Jesus, or of God.  I’m not turning my back on the Bible or its teachings. I’m simply acknowledging that, until it corrects its course, a socialist Pope sits atop an organization that’s heading down a path I can’t – and won’t – follow.

Horrifying. I hope he’s just grandstanding, and doesn’t really mean that he’s going to refuse to receive the life-giving Body, Blood, Soul and Divinity of Christ until the Pope starts agreeing with him about climate change.

Seriously, stop right now and pray for this guy, and for everyone else who’s so gripped with fear and confusion that they would trade the glory of the kingdom of God for this or any political belief. Lord, have mercy on us in our folly, and draw us back to you when we choose to wander around in the desert like idiots.

Anyway, the first comment after this article says this:

Yessss. That passage where Peter cuts off the soldier’s ear, and Jesus is like, “WTG, Peter!” and a host of angels came down from Heaven to sing the praises of the second amendment. How come you don’t hear more about that, eh? Same reason your parish priest is too timid and weak-kneed to correct his flock when they get these pansy liberal ideas about looking for alternatives to the death penalty.

After all, as one scriptural scholar pointed out, if they hadn’t had the death penalty in ancient times, Jesus would never have died on the cross, and then He wouldn’t have redeemed us from our sins, and then what? You want to be redeemed, don’t you? Death penalty, wooooo!

This kind of argument illustrates very nicely that, when you have a political point you want to make, you will always be able to find something in the Bible to back it up. Just as Jesus makes Himself horribly, wonderfully vulnerable when He becomes present under the accidents of bread and wine, His words are open, vulnerable, available to be manhandled into any shape that is convenient to us. He lets us do this to Him.

Let’s be clear, here.  The Church says we may carry and use weapons in self-denfense. (And no, the Pope didn’t say we can’t.) My husband is a gun owner.  What I object to is the way that American Catholics are so ready to grab the Bible by the scruff of the neck and force it to salute the American flag. God help me, I hate what my country has become in the last decade. I haven’t considered myself a Republican in years, because the party has become a parody of itself, and seems to want the Church to join it. One good thing: at least it’s gotten very easy to remember that, if your Faith asks you to do one thing and your fellow citizens are rallying around something else, your choice is clear.

Or, you know, go ahead and cut someone’s ear off. It’s probably what Jesus would have wanted.