I love, love, love alphabet books.  There is something so satisfying about getting everything all squared away by page 26.  Here are ten of my favorites:

So great.  Each letter has its own superhero — no one you’ll recognize from Marvel or DC, but heroes like Captain Cloud, who calmly catches crooks, or Laughing Lass, who laughs loudly at lawbreakers (she’s a little looney).  Funny and clever, and occasionally a little crude, but not sleazy!

A Is for Angry:  An Animal and Adjective Alphabet by Sandra Boynton

Sandra Boynton is the best.   It all looks like frivolous cartoon stuff, but Boynton has real talent for comedic timing — something that is lacking in so many kids’ books (authors think that kids just want the story to be silly or comforting or simple, and don’t bother to craft or shape the story).

I Spy:  An Alphabet in Art by the enchantingly named Lucy Micklethwait

Such a great idea!  You have to hunt for the word that starts with each letter — which makes kids slow down and look carefully at great art.  A painless way to introduce some art appreciation to the young parsons.

Animalia by Graeme Base

I haven’t actually seen this one for a while, but I remember the kids all loving it.  Lots of weird little details and solemnly intense images that most kids find fascinating.

Cute, cute, cute, without being cutesy.  The rabbit kid wants to paint a picture for his mother, and he ends up with something nice — but not before ink is spilled, glue gets out of control, etc. 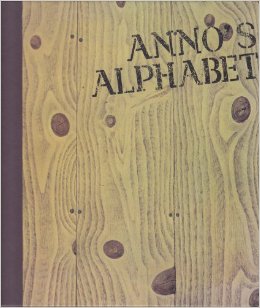 Anno’s Alphabet:  An Adventure in Imagination by Mitsumasa Anno

Mildly trippy! Optical illusions, head-scratchers, and just some weirdness.  I especially liked trying to identify all the obscure alphabetized items hidden in the borders (and there is a key at the end).

Z is for Moose by Kelly Bingham, illustrated by Paul O. Zelinsky

What happens when a capable, businesslike zebra is trying to organize a nice orderly alphabet book, only to be stymied by a rather emotional moose who doesn’t know his place.

Never gets old. This one has particular sentimental value for me because, on the first night my husband and I got together, I got drunk as a skunk and attempted to recite the entire book (under the impression that this made me charming and irresistible).  I got bogged down on Many Mumbling Mice, and I forget what happened after that. I think we got married.

Nothing really special about this one, really just a reminder that these little Dover books (they are about 4×6 inches) are invariably nice, and make good stocking stuffers.  I also really like the Dover stained glass coloring books, make of translucent paper.  If you color them with crayon or especially with marker, you can put them in the window for a lovely effect.  Some of these are the 4×6 size, and some are full book sized.

An illustrated version of the popular 1940′s song:  “A, you’re adorable; B, you’re so beautiful; C, you’re a cutie full of charms . . . ”  So cute and nice, full of happy children playing with babies and puppies and the like.  A nice present for a baby’s first Christmas.  We have the sturdy board book, which has endured much fond chewing.

What’s your favorite alphabet book?  And why are there no good Catholic ones?  I see a few for sale, but the illustrations look a little feeb.  Seems like it would be a natural, though — Athanasius to Zachariah.  Right?  Don’t steal this idea, I’m totally doing it.

Prayer for this evening
Top 10
1
Kathleen N. Hattrup
Pope considers what to do with pro-abortion Catholic politicians
2
Lauriane Vofo Kana
This couple has the longest marriage in France
3
Esteban Pittaro
Argentine “Mother Teresa” was a former model and actress who embr...
4
Kathleen N. Hattrup
On same-sex unions, Pope says Church doesn’t have power to change...
5
Mathilde De Robien
How a lost masterpiece of sacred art was discovered thanks to chi...
6
Philip Kosloski
How receiving Holy Communion can drive away demons
7
Philip Kosloski
Why is the feast of the Holy Cross celebrated on September 14?
See More