The American Catholic Almanac is meaty and fascinating

If you’re like me and most of my American Catholic friends, any combination of the words “American” and “Catholic” gives you the heebie jeebies. Either you’re going to get one of those “Jesus was a republican, and food stamps are a mortal sin” tirades, or else we’ll be treated to another learned treatise on how the one thing the Pope needs to do right now, IF he’s really the Pope, is to pronounce anathema against people whose disgusting little irreverent offspring eat Cheerios during Mass.

Well, relax. This is not that.  Not at all. Instead,The American Catholic Almanac: A Daily Reader of Patriots, Saints, Rogues, and Ordinary People who Changed the United States does us a great service:  it reminds us, or teaches us for the first time, that the United States would not be the United States if it weren’t for all her Catholics.

The book is entirely factual, not pious, and will appeal to people who like history but are skeptical about the contributions of religious people. It’s a companionable, well-sourced antidote to the idea that Catholics are a monoculture of biddable, brainless sheep. You can’t read this book and not be impressed, at very least, by how much variety there  is in our complicated congregation, and how much individuality, not to mention courage, ingenuity, and good humor. 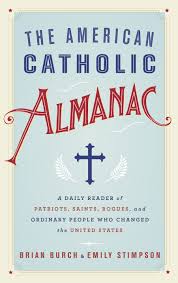 It’s my favorite kind of book these days: a one-a-day volume of 365 dated entries, each one highlighting some noteworthy American Catholic, place, or event.  Some of the folks profiled are famous (Norma McCorvey, Thomas Merton), but many are less so (songwriter Harry Warren, war hero John Basilone).  Some don’t act very Catholic at all (Justice Anthony Kennedy, mobster Dutch Schultz) and some, I had no idea were Catholic (Buffalo Bill, Clare Booth Luce).

The book also offers tidbits of history, anecdotes about cities and monuments, and stories of love, war, crime, politics, evangelization, and of course sports. In all, a fascinating, variegated, and informative book, and clearly a labor of love by authors Emily Stimpson and Brian Burch.

I love the idea of a return to the almanac. It’s suited to the short attention span of modern readers (*sheepishly raises hand*) but is written for adults or intelligent kids, and it is meaty. The American Catholic Almanac would make a nice Christmas present in case you crazy American Catholics are already thinking that far ahead!