New year! Great time to get your rotten, miserable  kids to carry their weight a little bit.
.
For reference, our kids’ ages are 16, 15, 14, 12, 10, 9, 7, 5, and 3. I am 32 weeks pregnant, my husband works long and late, and I work from home, and our house is small.
.
It is not clean.
.
However, the major areas of it do get attended to regularly, so we don’t generally refuse to let reasonably tolerant people in because of C.H.A.O.S. (can’t have anyone over, sorry). If we are having guests (which we do at least nine times of year, for birthday parties), an afternoon of intense cleaning with lots of Febreze and Magic Erasers gets us up to speed. I am not an especially clean or disciplined person, but I don’t want to live in complete squalor. With this system, if the kids grow up and decide they want a much cleaner house than the one they grew up in, they can totally up their game; but at least this way, they’re used to the idea of doing some kind of cleaning every day.
.
Here’s how we do it.
.
We use a team system. Each day, each kid team gets one area, and they take turns covering the different halves of the chore. Chores start at 7 PM, and should be done within 40 minutes. They keep track of whose turn it is to do which half. There is a lot of shouting, but I stay out of it. In an unsolvable dispute, the whiniest person gets the job they want the least.
.
I originally wanted to pair up big kids with little kids, but Damien realized that, with that system, big kids would end up doing everything and the little guys would just slack off. So we paired them off in teams of kids closest age: two oldest kids, two old-middle kids, two middle kids, and two little kids. Benny just wanders around yelling at the dog.
They are all officially expected to do the same amount of work, but we expect a lot less out of the younger kids’ teams. So, if the teenagers leave three pots “soaking” for me to wash in the morning, they get called back, but Team 9- and 10-year-old gets away with it.
. 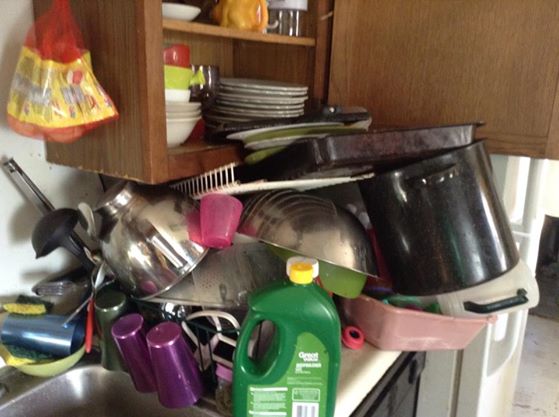 An example of a dishwashing job that will get you called back.

.
The cleaning areas are: Kitchen, dining room/living room, bathroom/hallway, and stairs/landing. Some areas are easier than others, so that they have some days to look forward to, and don’t get burnt out. They move through the cycle of cleaning areas every day, so they stay with the same team but do a different job each day.
.
Kitchen: one person empties the dishwasher, puts away stuff in the dish drainer, and does the dishes (including hollering “LAST CALL FOR DISHES!” before starting the dishwasher), and the other person clears and wipes the counters and sweeps the floor.
Dining room/living room: Living room includes putting away everything that doesn’t belong in that room, shaking out the area rug, and sweeping the floor. Dining room includes clearing the table and wiping it down, packing leftovers into containers and putting them in the fridge, wiping down chairs, putting away all shoes and jackets and backpacks.
.
Bathroom/hallway: Bathroom includes emptying the garbage can and putting a new bag in, wiping down the sink and counter top, and wadding up wet towels and washcloths into the bath toy box. At least they all seem to believe it includes that last part. Hallway includes picking up everything that doesn’t belong there, sweeping, letting the dog out, and refilling his food and water dishes.
.
Stairs/landing. Clearing junk off stairs and sweeping them. Any other job can be substituted for this one, if it seems more urgent. This job is just for the littlest kids, because it is easy and they are nincompoops.
. 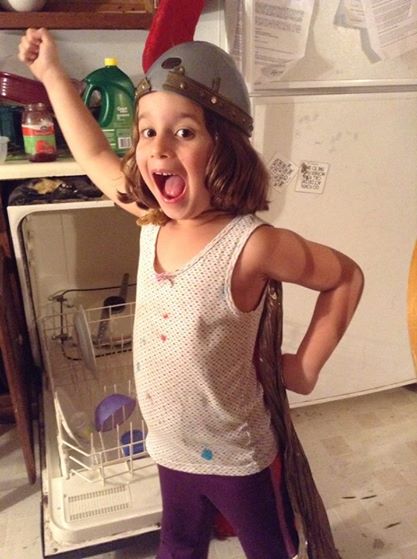 .
Laundry. The three oldest kids do their own laundry on the weekends, but the rest is my husband’s job. This is new in the past year or so, and it has been life-changing for me. In theory, I am in charge of folding it, and my system is to pull out socks, underwear, dishtowels, towels, baby and adult clothes, and put them away every day. Socks and underwear go into Rubbermaid chests right next to the dryer, and if people want their socks matched, they are welcome to match them.
.
In practice, about halfway through my pregnancy I became useless, and stopped doing more than throwing a load in the wash a few times a week.
.
Once a week or so, we have what we grimly term a “laundry party,” which means we put the little kids to bed, put a MST3K movie on Netflix, and I sort the baskets, throw clothes at the kids, and they fold their own and put them away. In the third trimester, I don’t  even sort, I just sleep on the armchair while the kids do it. We all pretend the kids never end up sorting my embarrassing underwear.
.
Miscellaneous: The boys are in charge of taking the garbage out (and putting a new bag in before they walk out the door with the full bag, dammit). This is not exactly a male/female thing; it’s just because the girls are older and tend to do more chores anyway, including things like changing the baby and giving the little girls baths. So we made garbage a boy job just kind of even things out. That being said, garbage is totally a man/boy job, because childbirth.
.
The boys are also in charge of sorting the recycling on Saturday mornings. I think we started this policy because we were mad at them one day. Plus, they are the ones who need cans for shooting with BBs, so they might as well gather them up once a week.
.
The kids are in charge of cleaning their own rooms, which means that the orderly ones clean their rooms and the slobs live in filth until I freak out and make them clear it out. Not happy about this, but that’s how it is right now.
.
We also pay for (or occasionally assign them as punishments) extra jobs that I don’t want to face, like washing little kids’ hair, or cleaning out the van.  On days when company is coming, everyone becomes a slave and has to clean everything until it’s clean, including things like mopping floors, washing windows, dusting, decluttering, and wiping down door frames. No one gets paid and we don’t care if it turns out fair.
.
Does this system work? More or less. If I am too tired to supervise, they do a good enough job on their own for a day or two, until I am up to following them around and raising everyone’s standards a bit. We make adjustments constantly, as the kids get older and people’s schedules and abilities change.
.
How does it work at your house?
Support Aleteia!