Up from Unity Candles

My marriage is now an adult! It’s eighteen years old as of yesterday. 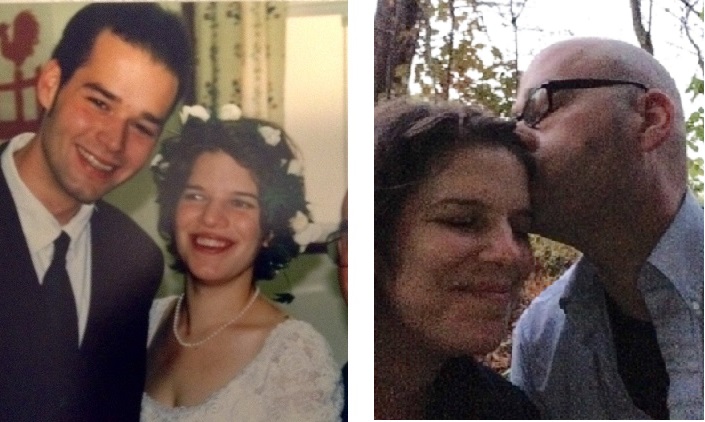 Here’s a piece I wrote back in 2011, wherein I recount some of the ridiculous things that happened during our wedding ceremony, and how little they mattered.

Here is a nice little explanation of what a Catholic wedding looks like, compared to what you might see on TV. No one “gives the bride away,” for instance, because a valid marriage requires that the bride and groom freely give themselves. Likewise, the priest does not pronounce the couple man and wife, because his function is as a witness: The ministers of the sacrament are the man and woman themselves. (For another perspective on what the typical Catholic wedding actually looks like, you might check out this post by Reverend Know-it-all.)

My own wedding, a bunch of years ago, was somewhere in between the one described in the first article and the circuses in the second. Everyone had the best intentions, but it was perhaps not the most meticulously-planned ceremony known to Christendom. The priest, for instance, referred to me as “Simminy” throughout the ceremony. (To my husband: I checked, and it’s still all valid. So put that suitcase down.)

For another thing, I had to give my little brother strict instructions not to squeeze the ring-bearer’s pillow too hard as he carried it up the aisle. This is because I had forgotten until the night before that we’d be needing a ring-bearer’s pillow, and although the one I hastily made looked lovely, it was held together with packing tape. Crackle crackle!

During the sermon, the priest wanted me to list the priorities of a married woman. At one point I nervously blurted “Parents?” Which was silly enough, but everyone thought I said “pets.” Seriously, who quizzes the bride? Sheesh.

But the low point of the ceremony was the Unity Candle. I know, I know—you’re not supposed to have a Unity Candle. It’s tacky and newfangled, a superfluous gesture in a sacrament that already expresses unity quite nicely. We didn’t so much plan the ceremony as get swept along by it, though—so I was as surprised as anyone else to find myself next to my new husband (who is a good foot taller than I) with a taper in my hand, trying to light the stupid thing.

The idea was that we each had a little flame, and were supposed to reach up and join our little flames together in one big flame, and then that would be Unity, like marriage is unity, plus love. Or something.

What actually happened was that my husband reached up and lit his part of the candle, no problem. I, on the other hand, was too short even in heels to even see where the wick was. So I fiddled around for a bit, then pulled my taper down to see if I had done it.

It had gone out.

So I tried to relight it from the Unity Candle, but it wouldn’t go. I whispered to my husband, “My candle went out!” At this point in the ceremony, we had been standing up there for a suspiciously long time, and people were beginning to cough and stir in their seats a bit, maybe thinking about all that delicious deli meat and pasta salad waiting uneaten in the church basement below. And so my resourceful husband whispered back to me, “JUST FAKE IT!”

And that is what I did. Giggling spastically and making the most unbridelike snorting noises through my nose, I twitched my candle around over my head until I figured it might as well be lit. And we slunk back to our seats.

As it turned out, that little gaffe was actually the best possible symbol for our marriage, inauspicious and embarrassing though it was: If it’s not working out the way you hoped, JUST FAKE IT. Every little detail isn’t important. There are plenty of other candles, so just keep the show moving. The guests were cheerful and hungry, the music played, we had some cake and then zipped away for our little honeymoon.

The next morning, we attended Sunday Mass in a little church we’d never been to before. Nobody knew our names, or that we had been husband and wife for less than 24 hours. I don’t know why, but the priest went straight over to us and asked if we’d like to bring up the gifts.

And this second sacrament in that quiet, sunny church was the simple, grace-filled moment that we had missed at our actual wedding. We brought up the bread and wine together and went back to our seats, full of joy, ready to begin our strange and wonderful journey toward unity.

New couples, listen to me: If your candle goes out, all is not lost. Unity is a long, long lesson that takes practice, patience, and most of all TIME. It doesn’t happen in a moment. Sometimes, it’s okay to fake it. A moment’s symbolism is nothing compared to what’s in your heart. You are the ministers of the sacrament—not just at the wedding, but every day of your married life.