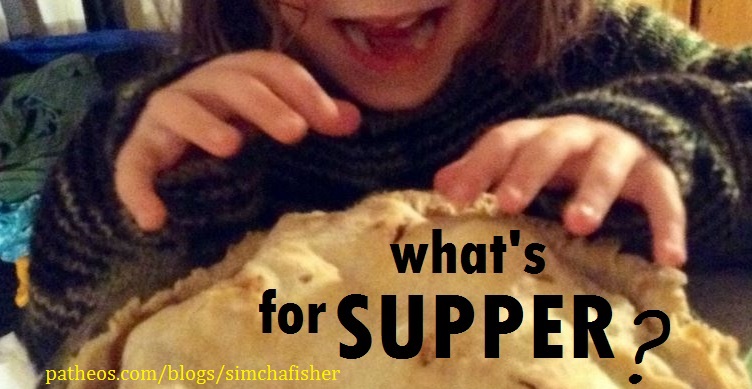 We left for Syracuse on Friday around noon. The first thing I did that morning was say, “What kind of paint?”

What kind of paint, that is, did the dog spill, o son who is knocking on my bedroom door first thing in the morning? And was there any possible way I could wait until the sun was up before I got up and started cleaning up the dog paint tracks that covered four rooms as he dashed around in a guilty panic? Was it, perhaps, tempera paint? Or even watercolors?

It was wall paint. Expensive wall paint, which I had been storing in a cabinet, behind which our dog apparently heard a mouse. And there had been damn near a full gallon of this paint left, and the whole can was lying on its side in a giant puddle while the kids stood around in open-mouthed horror. 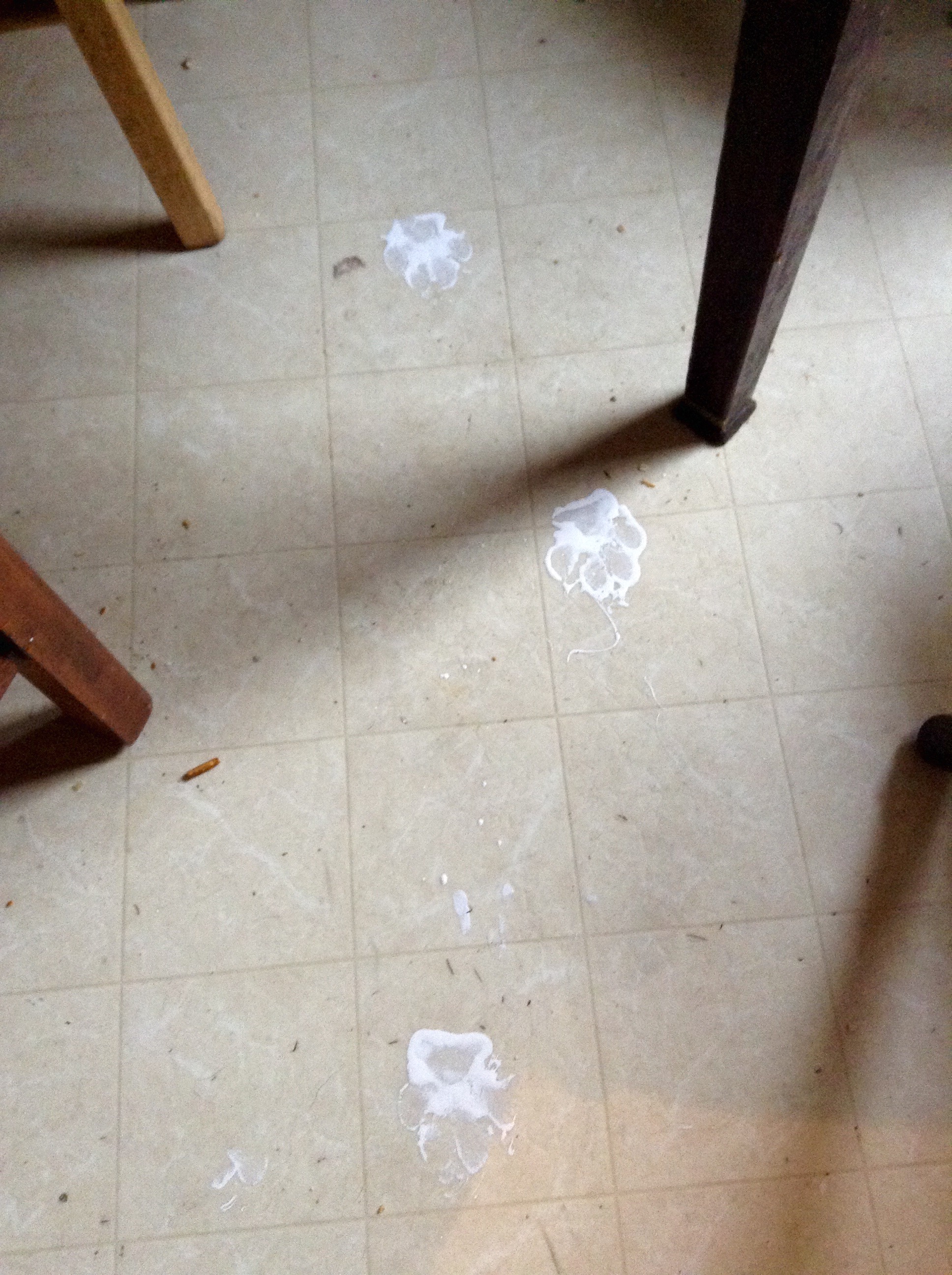 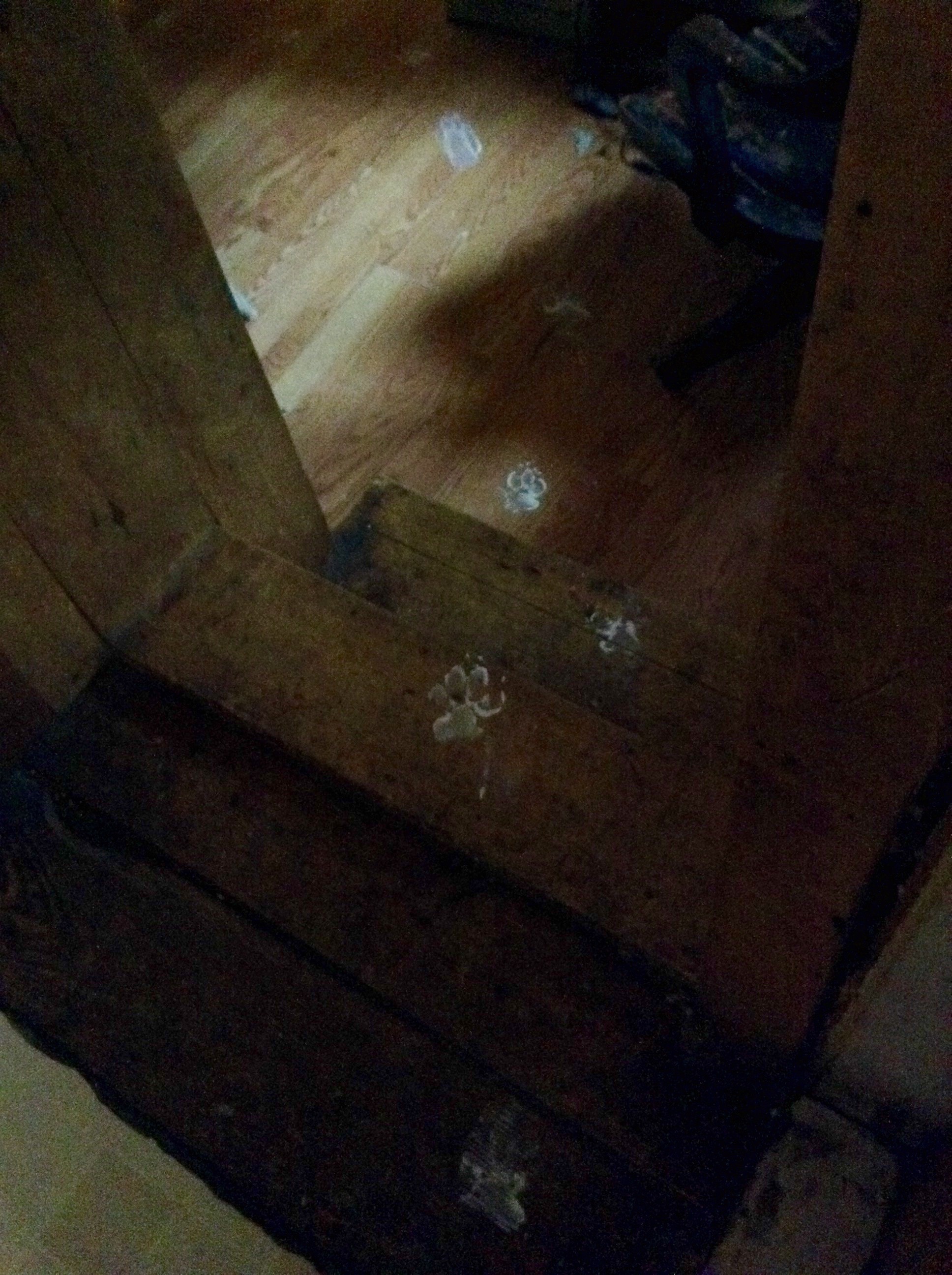 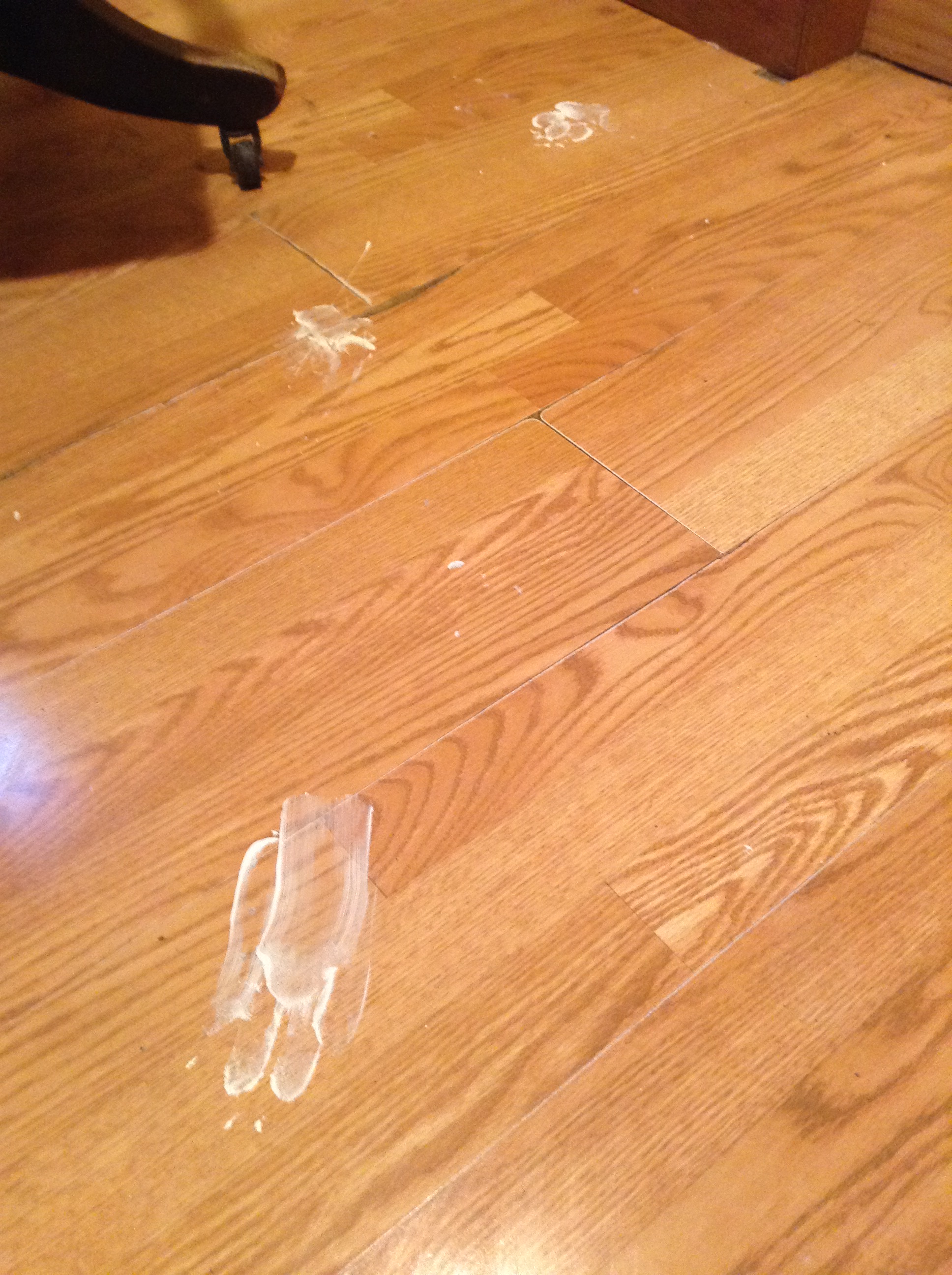 The way you clean a giant puddle of paint up, by the way, is with a dustpan. You use it like a scoop, and then you sop up the rest with your worst bath towel, and then with a second towel that is wet and soapy. Then baby wipes. You crawl around the house with baby wipes, scrabbling at the floor like an insane woman and thinking, over and over and over again, “He didn’t even catch the mouse. He didn’t even catch the son of a mother-grabbing mouse.”

And I wasn’t even packed yet, for the five-hour-ride I was planning to take with an eight-month-old baby who hates being in her car seat.

We got going kind of late that morning.

But eventually we did get there. I didn’t get much in the way of pictures from the conference, which was wonderful; but here is one of Corrie in the hotel room, trying to figure out how much to tip the pizza guy: 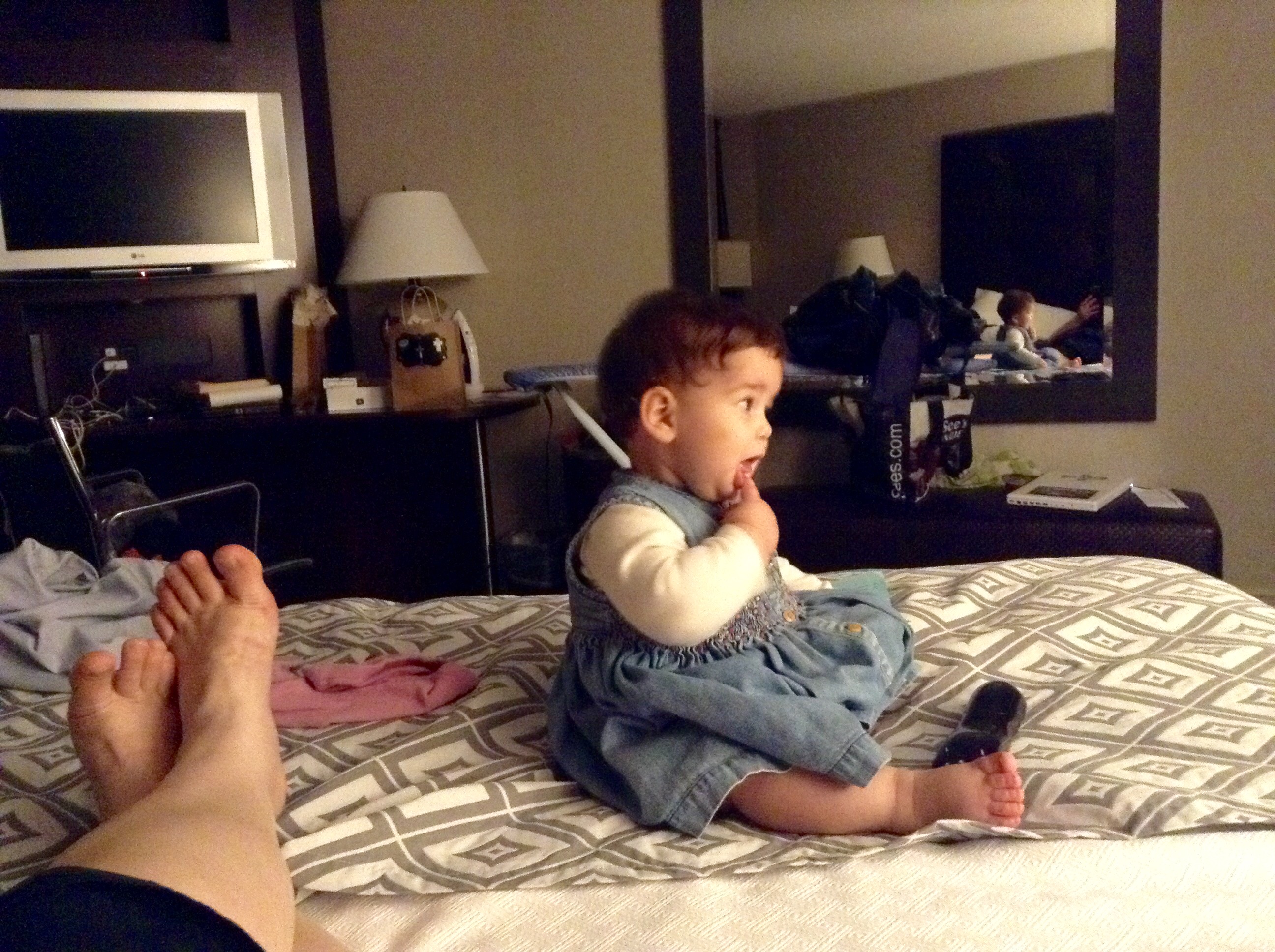 My legs only look fat in this picture because I have fat legs.

Kids had Chinese food cooked by my wonderful mother-in-law, Helen Mary. In Syracuse, Damien and Corrie and I had a fabulous meal on Friday, hosted by the conference organizers, of zucchini cakes in a spicy sauce, pea and crab risotto, and salmon with mango and asparagus. The lunch served at the conference itself was really nice, too. Grilled chicken on greens with apple and almonds, potato salad, and a scrumptious chocolate mousse with raspberries. The presentation was just gorgeous, and everything was very fresh.

I mention this because, if you’ve ever been to a women’s conference, you may or may not have found yourself muttering, “Well, I guess I came here to feed my soul, after all, but still . . . ”

Got home just before dinner; picked up some Aldi pizzas.

Hot dogs; chips; ice cream sandwiches we forgot to tell them they could eat on Sunday

I don’t even remember. I did finally get around to roasting all those pumpkin seeds. It’s tragic that we only get these once a year. 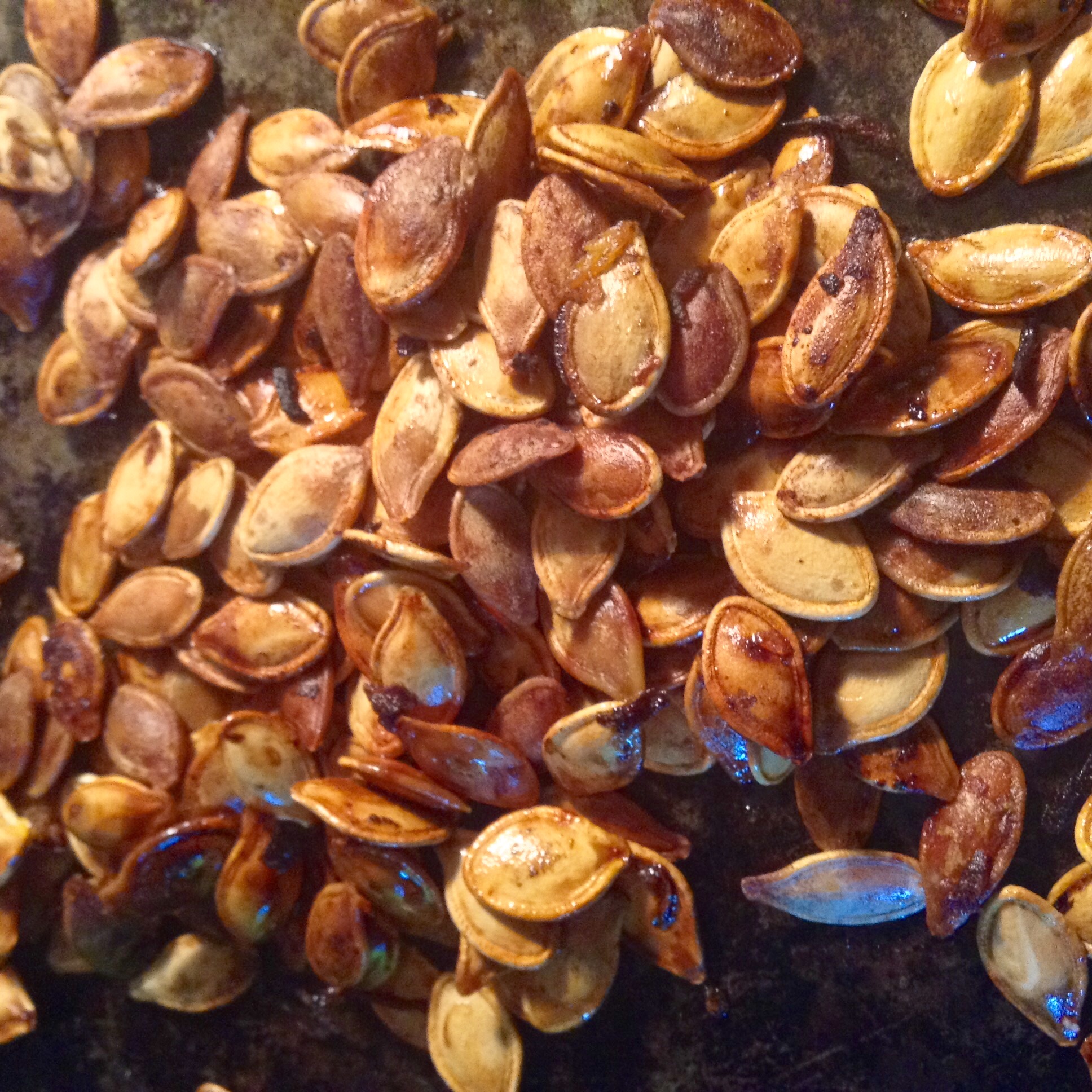 In Rome, many of the bars serve little bowls of pumpkin seeds for free. I had it in my head that there was a funny Italian phrase about pumpkin seeds, but instead I found this:

O mangi questa minestra o salti dalla finestra: You eat this soup or you jump out the window.

This, friends, is what you call “foreshadowing.”

Then came the muffins.

I had signed up to bake 48 pumpkin muffins for a school fundraiser. I chose an easy recipe, made sure I had all the ingredients on hand, put several reminders into my online calendar, and preened myself on having a special baked goods carrying case for just such an occasion.  I used to bake all the time, and would bring in fruit kabobs cut into heart shapes for Valentine’s Day parties, and cupcakes topped with rose buds cunningly fashioned out of fruit roll ups. I recently made a Cinderella coach out of bread and stuffed with onion dip for a princess party, and when my kids want a cake with a three-dimensional volcano spurting candy fire in one corner and stegosaurus taking a cooling drink from a pool made of blue Jell-o in the other, I do not bat an eye, but I smile, and I make with the dinosaur cake.

So a bunch of muffins? No sweat, daddy-o. I could make them with my eyes closed.

It’s hard to even describe how this happened, but this is pretty much what it looked like:

I feel like I have described this pumpkin bread recipe as “idiot proof” or “impossible to screw up.” It turns out the exception to this rule is when you . . . well, again, I don’t exactly know what happened, other than that I definitely forgot the baking powder, and I definitely burned the hell out of them, and I am definitely an idiot. And also, there was no food in the house, because we had been gone all weekend. The place was trashed, because we had been gone all weekend. It was raining. There were mice. The baby screeeeeeeeeeeeeeeeeeeeeeeeeeeemed whenever I put her down. We had doctor appointments, and drama club, and babysitting. I was trying to save money, so my plan was to “whip up a quick soup with the ingredients I have on hand, after I whip up some muffins.”

And I was just having one of those days where I had idiot hands. The only way you know how to do anything, suddenly, is the idiot way, and you lurch around your idiot kitchen with your idiot brain, like a poorly designed robot set to “IDIOT LEVEL:  HIGH.”

I thought I would salvage things by asking my three-year-old (who may possibly have gotten unjustly yelled at earlier in the day by . . .  somebody) if she wanted to help. She did want to. She wanted to help by anointing all her limbs with flour. 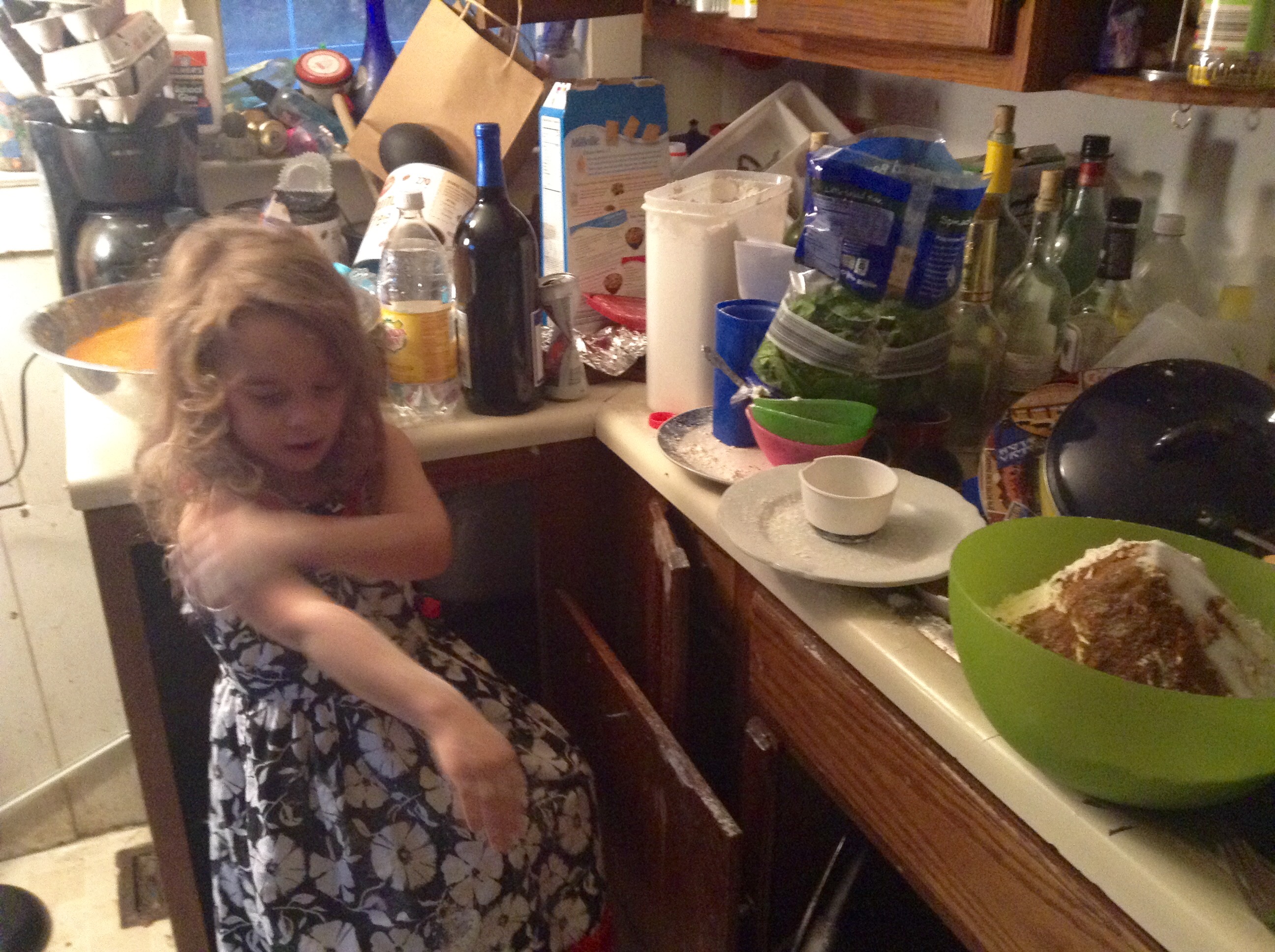 When questioned, she explained, “I am not doing anyfing.”

So, did you catch the part where I made a triple recipe (and a single recipe makes two loaves, so this was, like, a bathtub worth of batter) but forgot the baking soda? And then burned it all anyway? Yarr. 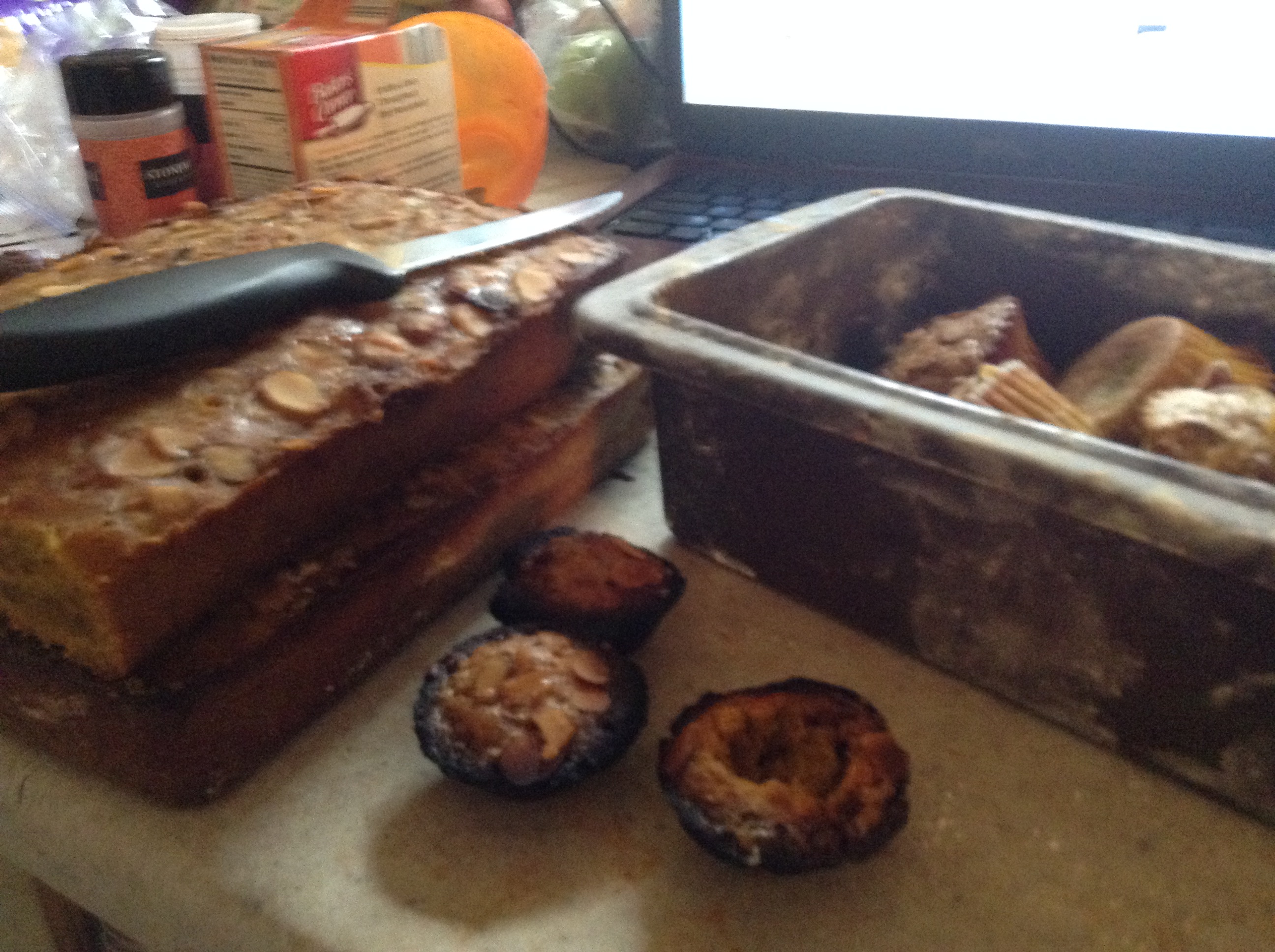 Here are my muffins, school! Now sell them, and make money!

And it took all day. ALL DAY to  make these misbegotten, inedible, gelatinous, pumpkin spice doorstops. (The dog thought they were great.)

But wait, I have to make supper, too, and it’s almost time to go pick up the kids! I shall throw together a soup! What kind of soup? Oh, I don’t know.

It tasted like hot, angry carrot with a chaser of canola oil.

The good news is, I made TONS of it.

I also made a salad, which they ate. I tried to make the soup nicer by adding some fancy striped noodles we got on sale, but it just kind of made the whole thing sadder, like when the put a festive bow tie on a corpse. One kid complimented me on the soup, saying, “I really like the broth, Mama. It’s so oily, and salty. Nice broth.”

Let us draw a veil over Wednesday.

I consult my meal plan, which I have designed to save myself time and anxiety, and what do I see? This is the day that Idiot Robot has ordained would be Try an Exciting New Recipe Day!  So I took a look at the recipe, which is too spicy for most of the family to eat, and which involves not only ingredients I do not have, but kitchen implements I do not own.

Right. What’s in the freezer?

On the twelfth day of November, my freezer gave to me:

I fit them all on two pans, too. Thanks, Tetris!

And yes, I made more pumpkin bread and muffins. With baking soda. I only yelled at everybody a little bit, and it only took about four times as long as it should have. And they turned out fine. See? 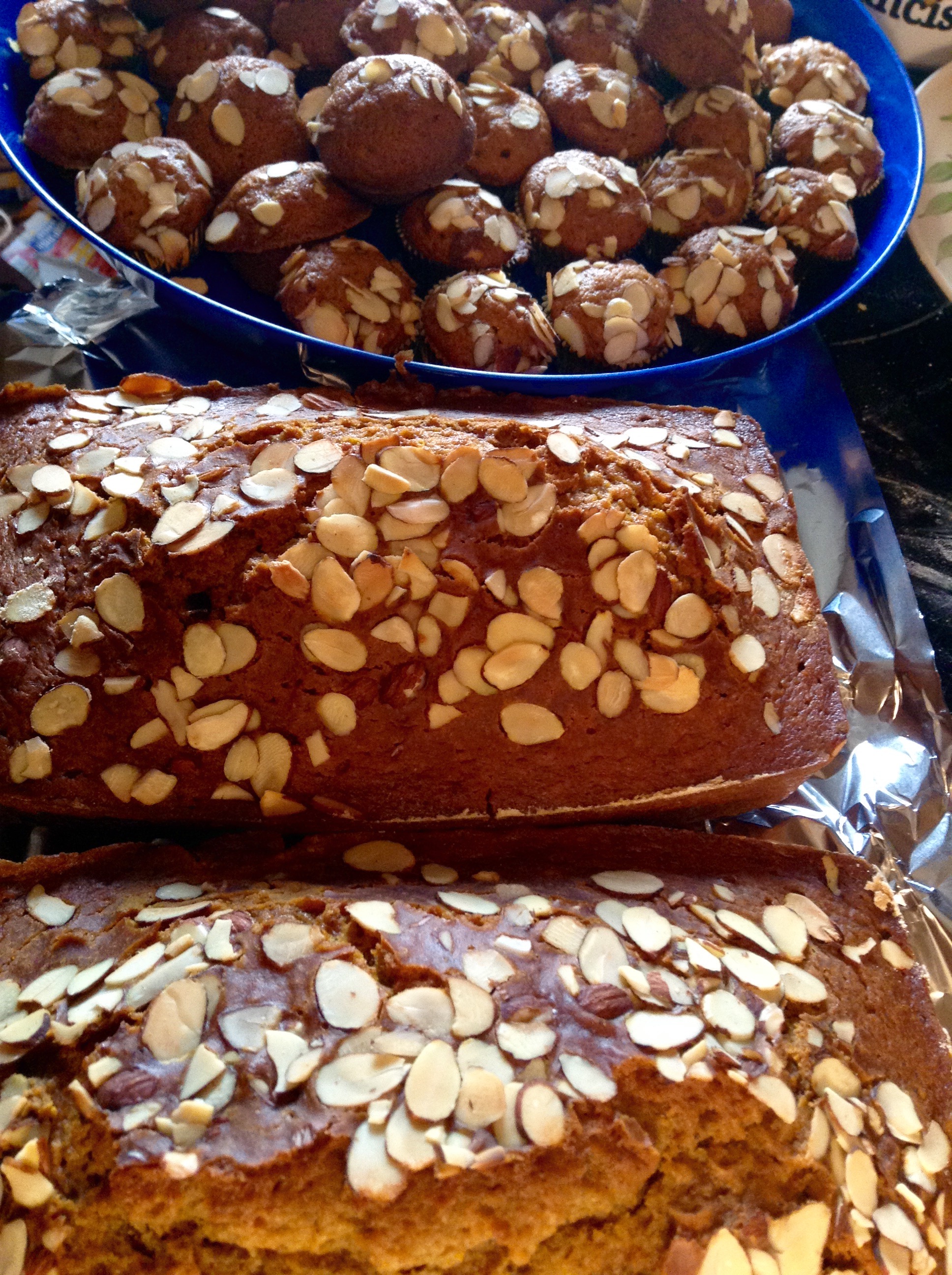 Look at that designated baked goods carrying case! Look at it, damn your eyes! *sob*

If you saw me doing anything weird on Facebook on Friday evening, it was because I was drinking a lot. Okay?

O mangi questa minestra o salti dalla finestra. Run around the house in that, you useless, hairy, muffin stealing son of a bitch.
***
Hey, I’m doing a real link-up again! Click the button to leave a link to your “what’s for supper?” post, and please don’t forget to mention my blog when you’re writing.

Prayer for this evening
Top 10
1
J-P Mauro
Hear Clapton and Pavarotti sing a prayer to the “Holy Mothe...
2
I.Media for Aleteia
These 30 shrines will lead the Rosary Relay for end of the pandem...
3
Cerith Gardiner
7 Ways to strengthen your relationship with the Virgin Mary
4
J-P Mauro
Watch the blood of St. Januarius liquefy in May 2021
5
Sarah Robsdottir
Dad’s priceless reaction to newborn goes viral
6
Philip Kosloski
How to pray the Chaplet of St. Joseph
7
Francisco Veneto
Former Jehovah’s Witness to be ordained Catholic priest in ...
See More