Why we’re dropping out of home school

A couple of people have asked why we’re not home schooling any more.  We will be, a little bit — my six-year-old son will be at home for first grade, and my four-year-old daughter keeps handing me notes composed of random letters, in a pathetic plea to be taught how to read and write.

And of course we’ll keep our feral three-year-old, whom no school can hold, and the smartest baby in the world (16 months old), who is not only putting together two- and three-word sentences, she can say “Come ON!” just like Gob Bluth.  So clearly, we will be maintaining a richly educational atmosphere, even though I’m sending the oldest four off to a classroom.

I don’t know, is it too passé to say I’m burnt out?  It wasn’t the hard work that wore me out; it was the crappy job I did, and the worrying about it.  That’s what was so exhausting.  And then there was this: 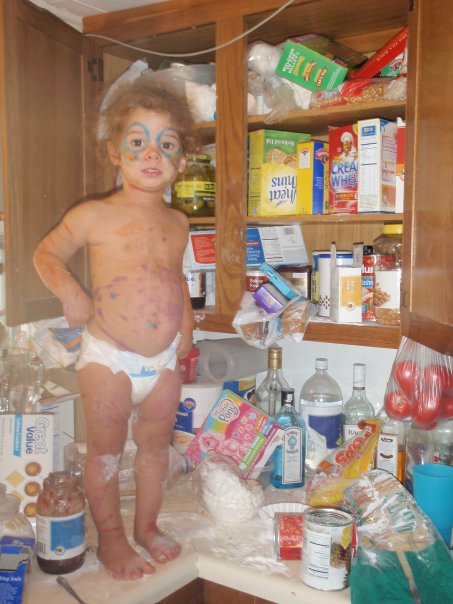 (This was the first day of school last year.  We wondered why she was letting us get math done.)

We had nice times,  when the kid would have revelations about free will, or when they’d groan because it was the end of our Latin lesson.  The dining room is still decorated with the heraldic coats of arms we designed for our Medieval unit, and there were some thrilling moments in stovetop meteorology experiments.

But I was sitting here ordering the math books for the school year (yes, now.  Shut up!  It isn’t even labor day yet) and feeling nothing but weariness.  We enjoyed some of the benefits home schoolers promise:  the closeness, the leisure, the freedom, the intensity, the depth.  But really just not often enough.  We did it for six years, and I’m about ready for something different (not necessarily easier!) for a while.

If I’ve learned anything in the last twelve years (and I haven’t), it’s that you never, never know what your life will look like this time next year– so who knows?  Maybe we’ll go back to home school next year.  Or maybe the world will come to an end, and I won’t have to explain place value again.

The four oldest kids have a lovely, rural charter school to go to, and I want them to be happy and busy.  Also, a couple of them turned out to be more complicated than we thought.  And I’m not the kind of mother that it’s okay to be around all day.

I do know that all my kids have learned that reading is a wonderful way to spend your time, and that figuring out things and hearing new ideas is thrilling.  They aren’t embarrassed to talk about ideas, and they have no idea how dorky they are.  So I feel more or less okay with the start I’ve given them.

Boy, I wish I still had that gin in the photo.