You can’t be any poorer than dead – UPDATED

Trick-or-treaters might be coming around with UNICEF donation boxes.  Don’t give ‘em a dime — UNICEF pushes for abortion and sterilization as part of its efforts to improve the lives of women and children.  Beyond the immediate irony of that idea, it’s not even good policy.  According to CatholicCulture.org (emphasis mine):

Pro-family UN watchers are concerned that [UNICEF’S] disproportionate focus on unsafe abortion, based upon questionable maternal mortality figures, detracts from addressing the major health risks to pregnant women in the developing world. Experts say these are severe bleeding, eclampsia, and obstructed labor. By UNFPA’s own admission in a 2004 report, the most important means of reducing maternal mortality is not access to contraceptives and legal abortion but the presence of skilled birth attendants and access to emergency obstetric care.

Imagine:  those backward, third-world women would rather survive childbirth than get help killing their children.  Savages.

Abortion proponents often link unsafe abortion and maternal mortality to push for legal, “safe” abortion. Critics of this argument are quick to point out that in Poland, when abortion was severely restricted in 1993, the country showed a sharp decline in the abortion rate and a decline in maternal deaths. In Ireland, where abortion remains illegal, the country reports one of the lowest maternal mortality rates in the world. By contrast, while the United States has had abortion on demand since 1973, this year the US reported a rise in maternal deaths.

Oh, and look at this!  I was searching for an image for this post, and turned up this ad: 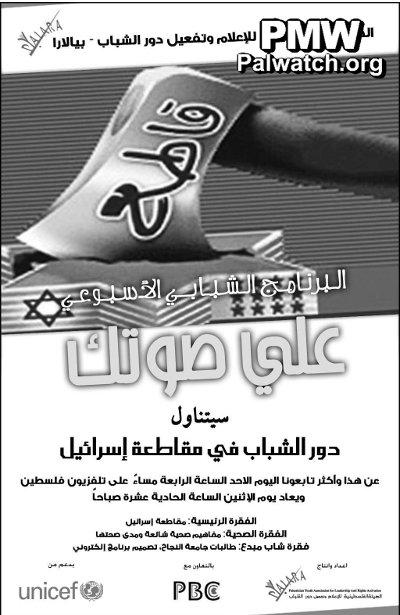 It’s an ad placed by the Palestinian Youth Association for Leadership and Rights Activation, and shows an axe hacking into the Star of David.   And looky!  There’s the UNICEF sponsorship logo, down at the bottom left.  (Image source and more information here.)

(Wait, let me save the very vocal minority here a little trouble:  Israel has committed atrocities!  They are the true criminals here!  Ms. Fisher’s blind, jingoistic support of Israel is what’s wrong with the Church and the world in general!  Aieeeeee, boogie boogie boogie, somebody said something about the Jooooooos!

Hokey doke.  Let’s just think about this for a second.  What is UNICEF for, again?  According to their website, it “works for children’s rights, their survival, development and protection.”

I’m not in favor of burdening young children with more bad news than they need to know.  If mini Buzz Lightyear shows up on your porch with a UNICEF donation box, just say, “No thanks, but here’s your fun size Snickers.”  But if your kid is being pressured by his school to use these collection boxes, you can tell him what I just said to my daughter:  UNICEF does some good things, but they also do a lot of bad things, and we don’t want to help them hurt people.  There are other charities that do a better job of helping poor people, so we give our money to them instead.

Here is our favorite charity, run by the Church with an incredibly low overhead:  Save a Family Plan.  Among other programs, you can choose a plan in which your family sponsors a desperate family in India, helping them to become educated and self-sufficient within a few years.    Boy, they get the job done.  And somehow they manage to do it without killing anyone.

Sandy, an alert reader, sent the following links to clarify the connection between UNICEF and PYALRA, the organization that ran the ad above.  According to Israel National News,

“In a statement dated March 23, UNICEF president, Caryl M. Stern, denounced the “incorrect use of the UNICEF logo” and stated that “UNICEF was not consulted by PYALARA about the use of its logo in a poster announcing a youth broadcast and it condemns the use of its logo to imply endorsement of political opinions. Neither the poster nor the television program it advertises reflect UNICEF’s policies or its views.” Ms. Stern added that “UNICEF’s partnership agreement with PYALARA ended in January 2010” and that “UNICEF will be carefully reviewing any proposed future partnerships with PYALARA.”

Glad to hear it.  UNICEF still stinks, but at least this time, it turns out I was the one going “Aieee, the Joooos.”  Sorry about that!

From the Anti Defamation League: http://www.adl.org/Internet_Rumors/UNICEF.htm