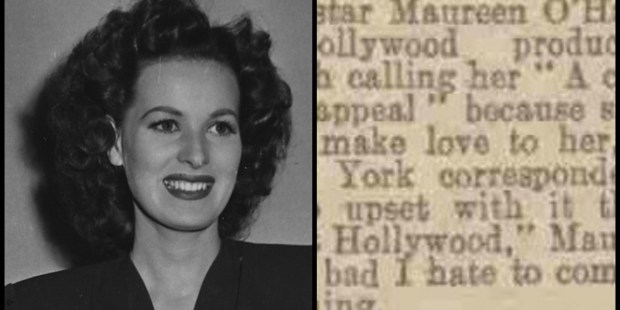 Public Domain
Share
Print
Elizabeth Scalia | Nov 05, 2017
Just imagine: if people had actually paid attention to that great and fearless beauty Miss Maureen O’Hara 72 years ago, how different things might be. The extensive bad behavior of powerful people, and the suffering it caused, would not have been wiped out, of course, but it might have been greatly lessened.

This little newsclip has been flying all over social media today, part of a larger piece published in the Ironwood Daily Globe (Michigan), in May of 1945, and preserved here (H/T).

It certainly sounds like O’Hara, who was never one to mince words or let her displeasure go un-noted. The actress, who died just two years ago at age 95, might have been harassed by some men, but (because not all men are beasts, despite the prevailing narrative) her forthrightness may have been enhanced by the support of powerful figures who had her back, including director John Ford, and her great friend, John Wayne. Not everyone, unfortunately, had or has such protectors.

She is buried at Arlington National Cemetery next to her husband, U.S. Air Force Brig. Gen. Charles Blair.

If Hollywood, or its paying customers, or the press, had taken O’Hara’s charge seriously (and the “Love Strike” headline suggests not), it would not have suddenly purified Hollywood, but it might have changed some things.

Speaking of “things” all of this reminds me (yet again) of the perfect definition of sin, as written by the great Terry Pratchett and voiced through his character, Granny Weatherwax, who — now I think of it — might well have been played by an older Maureen O’ Hara, had his book Carpe Jugulum been filmed ten years ago!

There is a very interesting debate raging at the moment about the nature of sin, for example,” said Oats. “And what do they think? Against it, are they?” said Granny Weatherwax.
“It’s not as simple as that. It’s not a black and white issue. There are so many shades of gray.”
“Nope.”
“Pardon?”
“There’s no grays, only white that’s got grubby. I’m surprised you don’t know that. And sin, young man, is when you treat people as things. Including yourself. That’s what sin is.
“It’s a lot more complicated than that . . .”
“No. It ain’t. When people say things are a lot more complicated than that, they means they’re getting worried that they won’t like the truth. People as things, that’s where it starts.”
“Oh, I’m sure there are worse crimes . . .”
“But they starts with thinking about people as things . . . ”

Yes, that’s where it all starts — with allowing the very bad, very broken human instinct to think of other people as things, as faces, as bodies, as liability units, commodities, as disposable. And the wreckage strewn throughout our society shows you where it takes us.

On this cold, dreary day, let us raise a mug of something warm and strengthening to the memories of both O’Hara and Pratchett, and try to do better against the thing of sin, and “thingness.”

Read more: “Open Secret”: The one thing that can help prevent sexual abuse