Jewelry made from breastmilk, umbilical cords, and now…IVF embryos? 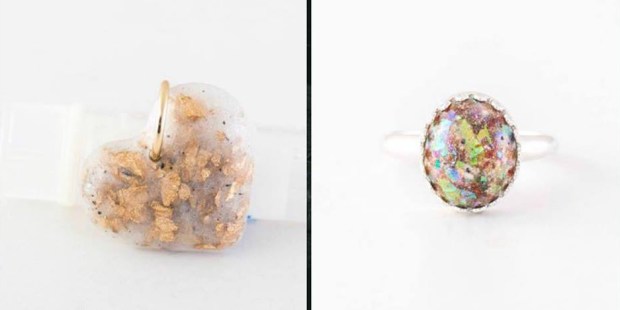 Share
Print
Elizabeth Scalia | May 04, 2017
When I first heard it, I thought it was satire — someone taking the not-new idea of preserving breastmilk in a ring (a memento of a sweet and often too-brief part of motherhood) and ramping it up to a ridiculous extreme.

It’s not satire, though. Apparently the Baby Bee Hummingbirds company of Australia, which popularized the breastmilk keepsakes, and will also put umbilical cord stumps, placental remains, or first curls into pendants and rings, has begun a line called “Embryo Ashes” — pendants containing one’s unused embryos, the “extra” products of In Vitro Fertilization:

After a six-year IVF journey to receive miracles Lachlan, 4, and 21-month-old twins Charlotte and William, Belinda and Shaun Stafford didn’t know what to do with their remaining embryos. Their babies.

Donation wasn’t an option, the annual storage fee was an added financial strain, and disposing of them unimaginable.

So when the NSW couple heard about Baby Bee Hummingbirds, an Australian company turning embryos into keepsake jewelley, they jumped at the chance. […] “I wanted to keep having more babies but the emotional toll, plus financially it was too much,” said Belinda.

“Donating our embryos wasn’t an option for us and I couldn’t justify the yearly storage fee. “I’d heard others had planted them in the garden but we move a lot, so I couldn’t do this. “I needed them with me.”

(WARNING: if you’re offended by images of mother’s breastfeeding, don’t click! You’re warned.) Baby Bee Hummingbirds website doesn’t mention the “Embryo Ashes” line, but the company’s founder, Amy McGlade did comment on the article, saying that since 2014 they have made 50 pieces of jewelry from “embryo ash.”

“I don’t believe there is any other business in the world that creates jewellery (sic) from human embryos, and I firmly believe that we are pioneering the way in this sacred art, and opening the possibilities to families around the world.”

Ms McGlade, who has been a midwife for 10 years, said families send them ‘embryo straws’ which the company expertly preserves and cremates, creating a type of ‘embryo ash’.

“It’s special because the embryos often signifying the end of a journey, and we are providing a beautiful and meaningful way to gently close the door. Reactions from families who understand the journey are amazing and heartfelt…What better way to celebrate your most treasured gift, your child, than through jewellery? {sic)

In an email to Aleteia, answering our inquiry, McGlade said, “We do truly understand the magnitude of the process.” She did not confirm whether any religious folk, from any sort of church, have brought up whether it is right or moral to pursue the “embryo ashes” line, which the company calls “another option” on social media.

On their Facebook page, BBH writes: “The families we craft for are truly aware of the various world wide options for Embryos in storage. They are informed, educated & loving people who have made an educated decision.”

The comments on Facebook are largely supportive, with mothers expressing the wish that they could have jewelry containing cells from miscarried babies, among other things.

I am sure the BBH folk believe they are doing something good, and as a mom who has miscarried, I would never gainsay the grief of another mother who wishes she had some piece of her lost child. I understand the sentiment, even as I reject it. And while the idea of making jewelry from placenta or breastmilk may be a bit “out there” for some, the concept itself is not “new.” Victorians, after all, would wear mourning jewelry that contained a few strands of hair from their departed loved ones.

And yet, I cannot read any of this and feel good — as some people clearly do. I keep thinking of Humanae Vitae and how that widely-disregarded encyclical by Pope Paul VI, whose limits were imposed “because of the reverence due to the whole human organism…” seems, every year, to prove itself more prophetic. And our human dignity is meant to hold, in death, as well as in life.

We seem no longer to understand that. Just the other day, Deacon Greg Kandra posted a piece about a man who — between innings at Citifield — flushes down the toilet the cremated remains of a baseball-loving friend.

The preservation of the dignity of the human person is the undercurrent running through Humanae Vitae, and year after year, the world moves further away from that concept. Rather it seems to move forward, inexorably, to further regarding human beings as things — sexual conquests; disposable babies; units of health/economic cost; religious or political “others” whose humanity becomes irrelevant as their needs begin to cost something of the world, or their views cost something of our own patience, tolerance, or compassion.

It is a broken world in which we live, and yet every human being is created “for greatness.” That’s what Pope Benedict XVI said. “Greatness,” of course, by God’s own measure, not the world’s. And Blessed John Henry Newman knew it, too:

God has created me to do Him some definite service; He has committed some work to me which He has not committed to another. I have my mission – I may never know it in this life, but I shall be told it in the next.

I am a link in a chain, a bond of connection between persons. He has not created me for naught. I shall do good. I shall do His work. I shall be an angel of peace, a preacher of truth in my own place while not intending it – if I do but keep His Commandments.

Simcha Fisher has more thoughts, and they’re well worth reading.