Why I wear a Brown Scapular 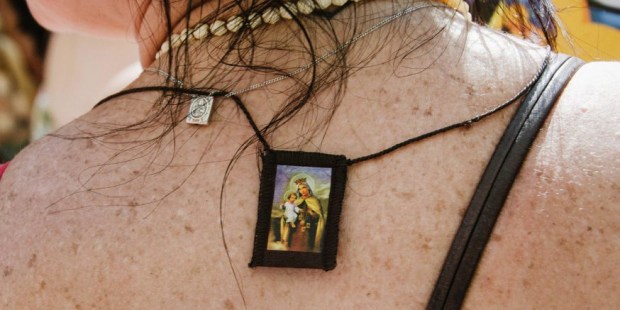 © Pedro Galdino
Share
Print
The Anchoress | Jul 25, 2017
My husband noticed a brown cord peeking out from the neckline of my shirt and asked, “What is that?”

My husband is a standard-issue New York Italian-American, who constantly wears a small gold crucifix (“from It’ly” as his mother always notes) discreetly hidden beneath his shirt. In the nearly 40 years we’ve known each other, I have never seen him take it off, and to his way of thinking, if you’re wearing a crucifix on your person, doing more than that seems excessive and yes, “hard-core.” So he was truly puzzled, when he asked, “When did you take that up?”

Understand, he wasn’t disapproving, only curious. My husband is a tolerant sort; if someone wants to practice devotions that he doesn’t feel particularly called to, that’s all right by him. In this case, however, I sensed a tinge of leeriness. After all, just prior to the appearance of the scapular, I had built an oratory in the house, and had been exploring the use of head coverings at Mass. Now, suddenly, a brown scapular? I believe he feared I was falling into obsessive behavior.

I confessed that I’d begun wearing the scapular, as a discipline; for penance and correction. “It’s my hair shirt,” I explained.

A Benedictine of my acquaintance has told me that scapulars began as a practicality — a protective covering for monastic robes; over time it took on a spiritual significance as a sign of one’s willingness to “take up the yoke” and learn from Christ. Pious laity eventually adapted much smaller counterparts to wear, both as a devotional and — in the case of professed laypersons — in solidarity with members of their scapular-wearing order. I believe Lay Dominicans wear the largest, a white square of wool, perhaps 6 inches across. Benedictine Oblates like me generally wear a Jubilee Medal, but some also wear a postage-stamp-sized black scapular, reflecting the black Benedictine scapular and habit. Carmelites, of course, will wear the brown scapular.

In my case, not having a black scapular, I recalled the brown scapular a priest friend had blessed and given to me as a gift. I’d never worn it, but I knew it was Mary-connected, and that the scratchy woolen thing was the closest approximation I would ever get to what I really believed I needed at the time — a proper hair shirt — to challenge me.

As ever, my spirit was willing, but my flesh had an attitude. Nevertheless, I have worn the brown scapular ever since.

Calling it “the world’s tiniest hair shirt” is no exaggeration. The one currently between my shoulder blades is new, and itchy. It is uncomfortable, but I have come to love it, because when an itch breaks through to my awareness, or the thing rides up and needs adjusting, it reminds me (and always just when I need reminding) that I am weak and need help.

I began wearing the scapular during a difficult time in my life, when I was not dealing well with a situation meant to teach me what I resisted learning: patience, humility and enough discretion to just shut my mouth, sometimes, rather than let it run rash and reckless as usual.

Read more:
Hush Your Mouth: The Mercy of Shutting Up

I was like a dumb ox, in need of a yoke to get me in line; to guide me and help me to obey. The scapular is that yoke.

It is not heavy; as yokes go, it is light, and even “easy,” but it is still a discipline. When my impatience surges, that itch can restrain me, and the restraint is humbling. The resultant humility actually gentles me a bit. It reminds me that life is sometimes a hard row to hoe, requiring a supernatural assist. As my impatience ebbs, I am reminded that worthiness is an illusion, and that willingness is all that is required of us. And that slow growth is better than no growth.

So, this scratchy, abrasive little penance is a very useful spiritual nudge; it awakens me to the hushed grace notes that linger soul-deep, amidst all the superficial noise of my heart and head. It helps me to own that grace, in much the same way a musician finds music within the spaces between the notes.

The prompting to find and wear that first brown scapular was a hard-core gift that I could only receive when I was cracked enough to need such strings.

A variation of this piece was first published in 2015.