Newly married and moving in together? Here’s how to avoid the pitfalls 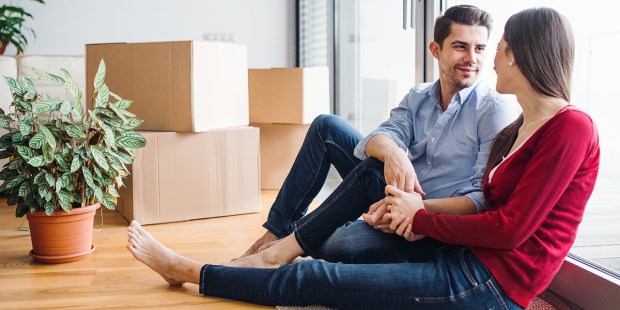 Be sure to establish some ground rules right from the very beginning.

As newlyweds settle into their new life together, they might experience difficulty in finding their place within their relationship. At first, they may not really feel like they’re at home. The problem is often some factors that were overlooked at the very beginning.

When your new home does not feel like home

If one of you moved into a place that belonged to the other, it might not feel like home. Even if your partner keeps telling you with the greatest sincerity, “It’s your home now, too! You can switch the furniture around or hang your pictures … jut don’t touch that one because mom gave it to me!” it can be difficult to feel like the space is home.

What about my stuff?

This impression of not having a place to call your own can turn into something real. You might literally have no space of your own. For example, you might be frantically trying to find a place to put your stuff in a home magnificently arranged by your partner who asks you to “please, put your stuff elsewhere because it doesn’t belong in the living room.” And you have to finally retreat into the smallest corner of the house where all of your belongings are piled up.

Or perhaps you are the one who miserably complains, “He’s got his desk, but it’s not enough, so now he’s taking over the living room. His computers, bags and papers are all over the place. And I don’t even have a space for my own desk!”

Do I even count?

The underlying reason behind this impression of having no place of your own could have a psychological basis. Perhaps what you really feel is that you don’t count.  Isn’t that one of the main reasons why it’s so hard to live together? The perception that you don’t count could later spread into all the other aspect of your life together, from the most insignificant ones to the most serious.

It’s important that each couple who encounters such problems question the way they act. The statement “I don’t count” is not harmless and there may be real suffering behind it. Are you doing your utmost to show your partner the love and respect he or she deserves?

The beginning of “us”

A good question to ask yourself is whether, in being married to you, your spouse has become what he or she was destined to be. Did it happen because he or she is with you and influenced by you? Does each of you feel truly at home with each other? Can you fully express your views and participate in decision making?

Life together emerges from a new reality — “us” — and this reality is not the sum of the two but more of an emergence of a new and original cell that needs to separate from its parent if it wishes to find its own way. It is a reality where each of you knows that you come first in the thoughts of your partner and fully exist in the eyes of your partner, in the same way you both fully exist in the eyes of the Lord who says: “In my eyes you are most precious.”

Read more:
How to choose where to spend the holidays when you’re newlyweds

Read more:
After 10 years of marriage, here’s 5 things I want newlyweds to know