How to put an end to sibling rivalry 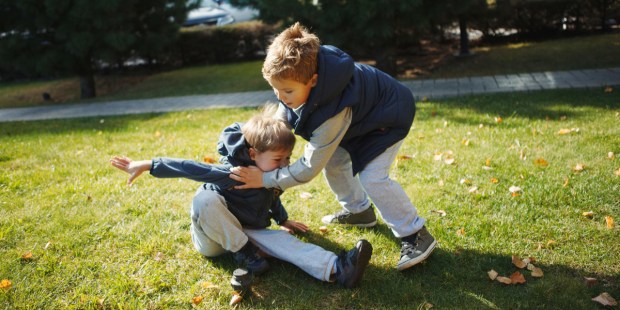 Jealousy among brothers and sisters can be hard to handle, but there are ways to help children through it…

“As a newlywed, I was convinced that jealousy could be avoided in our future children if we took care to never compare them and never take sides,” says Mary, the mother of three teens. “I believed that being fair and always telling them they are loved, and that I love them all equally, my children would’t feel jealous. When the first fit jealousy happened, I initially thought it was entirely my fault. I was shocked. I forbade them to ever show they’re jealous. It hurt me.” Mary’s husband, Ian, adds, “I was not too worried about fights at home, but I thought they were a team once they were outside. I was so disappointed to learn the contrary was true”.

Elizabeth,, a mother of six, and grandmother, has lost count of the jealousy fits in which she has intervened. “Children want the love of their parents all to themselves, ” she says. “When we were expecting our second child, I saw this fear in our eldest daughter. She was afraid she would have less time with us. We doubled our attention for her. But [it was still very hard].”

Allowing a child to vent jealousy

A jealous child thinks, “My brother or my sister are perhaps better than me.” To feel confident, the child needs both parents, all of the toys, all the space.  More importantly, this kind of child needs more of everything than the other. It is a hard task to help a child learn how to deal with the fear of getting less. Often, taken lightly, this kind of jealousy can cause great damage and poison childhood. And when it persists, the relationship between sisters and brother does not improve even once they have grown up.

Allow your children to vent out their jealousy. Elizabeth and Mark have been able to observe this paradox with their children and grandchildren, “If the parents want the fits of jealousy their children have to stop poisoning their life, they must not prevent them from expressing it. Children suffer (morally and physically) both from jealousy and their inability to express their frustration. And since no magical remedy that prevents the fits of jealousy exists, there is no point in trying to prevent them. Many people say, ‘Our children are not fighting? They love each other. Our children are fighting? They hate each other.’ Yet, we came to realize when you insist that children don’t feel jealous of each other – you will make them hate each other. However, when you allow them to ‘hate’ each other, they develop fondness for one another.” As an experienced grandfather, Mark specifies, “When children fight, they test one other, adjust their characters, and can reconcile so they can love one another later!”

A jealous child does not always finds words to express how he or she feels. When helped to express his or her frustration, such children feel that they are understood and can gradually get rid of resentment.

We often begin to compare children at the maternity ward, the moment a baby is born, “He’s smaller than his sister,” “She’s a better sleeper” … and so on. If parents have made a promise to never compare their children, they must keep it – even if they get exhausted and exasperated. “You never make your bed … your sister at your age always made hers!” “Your brother is better organized than you are” … When a jealous child hears such words, he assumes that the other is more loved, and begins to hate his or her sibling. Any compliment destined for the other, is seen as a reproach directed at him. You need to take time to talk with a child who feels “picked on” allowing him or her to express their fears and frustrations that have resulted from clumsy comparisons.

Psychologists also try to draw our attention to the so-called “positive comparisons” (“How quickly you solve these math problems! If only your sister could do it like you!”), which can also encourage jealousy. Even if such words are appreciated by the child for whom they’re destined, they might fuel rivalry, which could be harmful. The best way consists in describing the situation as we see it or as we feel it. “You did not make your bed this morning, this is not the first time you forget about it. I’m very disappointed. I know you can do it, so I expect it next time.” Or on the contrary, “I am so happy to see that you’ve made your bed!” The point is, to criticize or praise the child in question without referring to his or her siblings.

Whether at mealtime or in a car, Valerie treats her young daughters, born 16 months apart, the same. Despite this, their mother has observed that “it doesn’t work” – the signs of jealousy are still there. Treating children the same way is an illusion. Worse, it could only fuel jealousy. In thinking “I am like the other,” the jealous child thinks “I am like anybody else.” The child no longer feels unique. It is much better to give each according to his or her needs (which is what is fair) than to aim for equality at any price.

“Who do you love more?” Mary and Ian have heard this question on multiple occasions! “Naturally, we say that we love them all, we have no favorites. But it’s not good enough for them. Actually what they want to hear is that we simply love each of them for themselves, without systematically comparing them to each other.”

Similarly, siblings are less jealous of one another if they have different activities. Temporary separations allow them to realize how important they are to each other. Birthday parties are also a good opportunity to celebrate each child, on condition that you don’t clumsily combine them. Even if you have twins, have two separate birthday cakes and different gifts.

Avoid limiting children to one role

We often attribute roles to our children. But this can pigeon-hole them and affect the way they relate to others. “I attribute different roles to my children, so each of them feels ‘special,’” says Paul. “So, my eldest son is good at math, the younger is an artist, and my youngest daughter is an accomplished athlete.” The intention is good; however there is a risk that a child will become a prisoner of such stereotypes, which may prevent him or her from discovering and developing other talents.

Gender roles can also become a source of jealousy, especially if they are strictly divided between boys and girls. The order of birth can also be hard to accept. “I was the last of five girls, and then eight years later, my parents finally had a boy, no one expected,” recalls Elizabeth “They were overjoyed and I felt dethroned and demeaned because I was a girl and no longer the baby of the family. I turned into a real tomboy, constantly seeking my parents’ attention so they would understand that I still needed to be noticed by them.”

Another troubling situation is a sick or disabled child. Here again, we must resisting imprisoning the child in this situation or turn him into a burden for his brothers or sisters. Perceiving a sick child only through a prism of his “condition” can only increase the number of eventual problems. His siblings will feel jealous of him, because he takes all of the parents’ time and attention.

With the right attitude and the right words, parents can help to reduce the number and the intensity of jealousy fits. But the only real remedy is to fight the sadness the jealous child is feeling when his sibling gets something he doesn’t have. In order to rejoice in his sibling’s success, the child has to have self-esteem and realize that the success of his sibling doesn’t deprive him of anything. The love of his parents is not a cake that must be shared.

Educating a jealous child is a long process. Elizabeth remembers the special moments she spent with each of her children at bedtime. “I was trying to show them that jealousy prevents them from feeling happy. And they told me about their fears and fell asleep feeling more free.” To help her children to develop positive feelings toward each other, Anne experimented with an original formula. “My husband and I gathered our three sons (14 to 18) and their 6-year-old sister around the table, and my husband asked each of them to tell what they liked about each other. When the answers were too vague, we asked them to be more specific. For the older ones, it was a great way to discover that they could appreciate each other despite all the fighting.”

No situation remains frozen in time. It is true that relationships between siblings evolve. It is sometimes when we least expected it that things change. But we should not forget about the strength offered to us by the sacrament of forgiveness or the precious help of a prayer that children recite for their brothers and sisters, as well as that of the parents for their children.

Read more:
What should be done when jealousy devours a couple?

Read more:
How to make sure small talk doesn’t turn into gossip