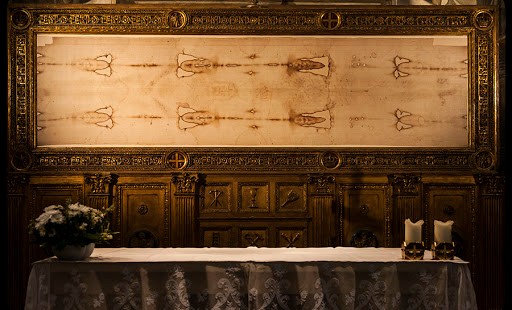 During Holy Week, the Shroud allows us to contemplate the image of the One who has given his life for us.

At daybreak, on the morning after Jesus’ death, Mary Magdalene came running to Simon Peter and the other disciple Jesus loved, saying, “They have taken the Lord out of the tomb, and we don’t know where they have put him!” (John 20:2). The Apostles rushed to the tomb, where not long before, the body of Christ had been carefully laid to rest. Having arrived at the tomb first, John was able to glimpse the burial shroud, but let Peter go inside before him. He then entered the tomb, saw the shroud and believed. For the modern-day Church, as for Peter and John, the shroud in the empty tomb has come to symbolize the Resurrection of Christ.

So, what exactly did the two apostles see?

They saw the shroud and the wrappings lying where Jesus’ body had been. Peter and John were able to see that not only was the body of Christ was gone but also that it had not been stolen — it had vanished from the shroud, leaving it in the same place as they had left it.

The Holy Shroud – a window into eternity

Faith needs symbols, and the Holy Shroud is a sign that the Son of God incarnated himself as a man, was betrayed, and gave his life for mankind. The precious cloth, with an imprint of His image, closely mirrors the Gospel’s accounts of the Passion and lets us feel love for God. This object of fervent devotion inspires silent contemplation of “the One they have pierced” (John 19:37). We gaze at this face full of dignity, patience and mercy, where pain and horror have given place to peace.

“The Holy Shroud is an image of Christ at his most vulnerable,” said John Paul II before the Shroud of Turin on May 24, 1998.  It reminds us that the salvation of the whole world lay in the obliteration of this death. The Shroud is an invitation to all of us, as those who believe that God’s love and mercy overcomes all trials, all limitations and despair to relive Passion, the suffering and the utter vulnerability. For in reminding us of Christ’s victory, our faith tells us that tomb is not the ultimate goal of existence. God is calling all of us to a resurrected life.  In telling us of love and sin, the Shroud invites us to repel the sinful reality and impress the image of Christ’s merciful face in our minds.

The French poet and playwright Paul Claudel said of the Holy Shroud that “it is more than an image, it’s Reality.” In 1973, upon having contemplated the Shroud, St. Paul VI declared: “whether or not we believe in God, there is the mysterious attraction we feel growing inside for the person of Christ, and we hear his voice echoing in our hearts, inviting us to look for him behind faces, where he is concealed to be discovered, loved and served.” It takes us back to God. In the same way as Jesus is “the image of the invisible God” (Col 1:15), the reflection of the Father, “the radiance of God’s glory and the exact representation of his being” (Heb 1:3). Leading us to the Father, this Shroud is a window into eternity.

Read more:
Get to know the Shroud of Turin’s companion cloth