How to react when a child repeatedly lies to your face 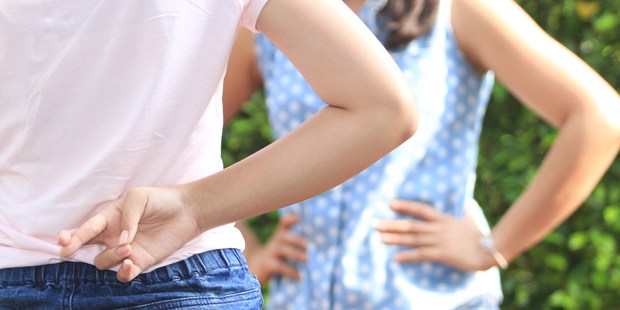 When a child starts developing the habit of repeated lies, it should be a warning sign. Here are some steps to take.

Until the age of about 8 or 9, a child doesn’t always make a clear distinction between what’s imaginary and what’s real and can’t grasp the impact of straying from the truth. That’s when they may tell fanciful tales or “adjust” the story of what really happened to make it more interesting. But what about repeated lies by older children?

The reasons a child feels compelled to lie

In a younger child who doesn’t feel listened to or when family problems get in the way of parental attention, a repeated lie can be a bid for attention. Later on, when the child has well-integrated the moral rules and their ensuing consequences, a lie can become a means of escaping a difficult situation and avoiding punishment.

In this case, it’s important to show you’re not duped and to bring the child back to reality. Otherwise, he’ll feel encouraged in a process of both disowning responsibility for his actions and a loss of confidence in the adult. Sanctioning a lie amounts to enabling it to grow.

Sometimes, a child lies to escape a parent they feel is being too overbearing. That’s the challenge of adolescence when combining respect for a teen’s sense of self-worth with a parents’ legitimate presence. In other cases, a lie can be the sign of weak self-esteem. What more effective way to attract love and sympathy than to invent stories in which one is the hero?

Benevolent reactions to a child’s lies

So, faced with all this, how should parents react? By bringing their child back to reality, by reminding ourselves that the more they get away with a lie, the more they’re apt to repeat it.

And the child who is looking for attention? You have to remain a bit aloof from what he’s saying. Is he looking for a confrontation? The best reaction is not to react. Parents do better to concentrate on the values they believe in rather than the lie.

Is the child lying to get out of something they’ve done wrong? Parents can tell him what they believe in, without forgetting to insist on the consequences of their actions: “You say these cigarettes aren’t yours, but I don’t believe you. I think you’re just afraid of how I’ll react.” But just as a sin half-confessed is a sin half-forgiven, better to insist on his courage if he admits to the truth.

As for punishment, it’s important to apply the set rules, even at the risk of being told “you’re so unfair!” In any case, parents must encourage their child to make up for their actions rather than inflicting pointless punishment.

Finally, you must never call a child a liar. And remember that it’s not a bad idea to ask yourself: what about me — do I ever lie?